The 18th century British colonists, the self-righteous Anglican males of the self-assessed superior civilization, upon arrival in the Mughul-Muslim India, were repulsed by the sight of Hijras (transgenders) and baffled over why they were accorded so much respect in royal courts and other spheres of life. After deposing the Mughuls, and in discharging the white man's burden of civilizing the inferior races, the British colonists enacted the Criminal Tribes Act, 1871 to declare what they called Eunuchs (transgenders) a criminal tribe (among many other Indian tribes) on the theory that certain tribes were genetically criminal and must be placed under state surveillance.

By invoking the power of criminal law and associated prisons and penalties, the British colonists attacked the dignity of transgender community, degrading them in social echelons, and eventually forcing them to adopt begging, prostitution, and other questionable professions. Turning a respected community into a legally certified criminal tribe was an egregious blunder of the British colonialism (and it is hoped that Sadiq Khan, the new mayor of London, will begin to restore the full rights of transgenders at least in London municipality).

Under the Mughal rule, transgenders were called Khawjasaras, a designation of respect and dignity. The Mughals employed transgenders as security officials in charge of female quarters. This role was assigned to transgenders in imitation of their historic role in holy cities where transgenders served as facilitators between men and women performing prayers and pilgrimage. In most parts of the Muslim world, transgenders commanded respect and were considered holy and special in the eyes of God.

The spirituality of transgenders is considered as authentic as that of men and women. The Prophet of Islam treated transgenders with respect, prohibited their ill-treatment, and had good things to say about spiritually-inclined transgenders. Believing that transgenders are dearer to God, some Muslim rulers appointed them as intercessors in royal palaces, including those of the Ottoman and the Mughal.

In India, the Mughals appointed transgenders to positions of power and trust. Transgenders served as courtiers and councils, giving advice to princes and princesses. They were familiar with court etiquettes and knew the secret workings of Mughal households. They were domestic insiders. Having the controls of intelligence officers and the prestige of royal confidantes, transgenders enjoyed special powers and privileges unavailable even to the most powerful wazirs (ministers) of the kingdom. Transgenders were educated in statecraft and nuances of religion. This treatment and elevation in the Mughal courts provided a great incentive for non-Muslim transgenders to accept Islam. 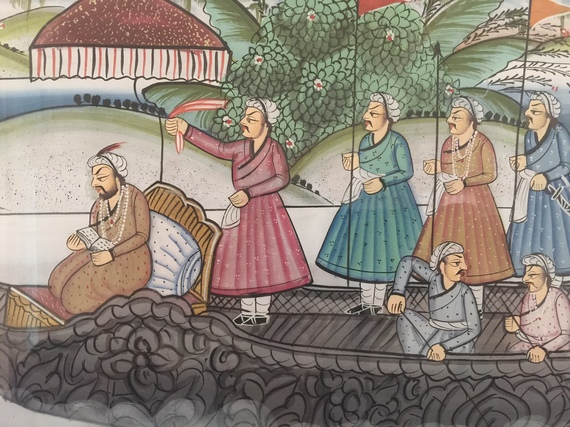 After the 1871 Criminal Tribes Act, a vicious cycle of persecution against transgenders began in the British India. Degraded to criminal tribe with genetic flaws, transgenders lost their royal status and gradually were excluded from all respectable social circles. Such is the power of the master that slaves and servants fashion their own hierarchies of inferiority among themselves. All designated criminal tribes under the 1871 Act suffered social degradation and persecution but transgenders were the hardest hit.

In order to survive, some transgenders took to dancing performed at the birth of a new child in the community, collecting wadhais(tips). Some developed the joyous art of clapping and dancing. Some developed the art of lampooning and were invited to the wedding feasts of the well-to-do to make fun of the groom, the guests, and even the politicians. They played the same role of amusing private gatherings as do late-night TV comedians in the United States. Some transgenders took to begging, some to prostitution, and some to criminality, thus fulfilling the prophecy of the 1871 Criminal Tribes Act.

After the British left India and Pakistan, the Criminal Tribes Act was repealed with respect to transgenders. However, the damage done to transgenders was irreparable. Transgenders lost social respect and various stereotypes have been built to humiliate and discount the transgender community.

A pejorative word khusra is in active currency to denigrate the personality of transgenders. Friends might tease a feminine-looking friend as a khusra. An incompetent politician is called a khusra. In both India and Pakistan, the word khusra is associated with impotence, incompetence, and powerlessness.

In Pakistan, the people have forgotten the spiritual role that the transgenders played in Islam. Transgenders are ridiculed and insulted. Popular TV shows, such as Khabarnaak and Khabardaar, make cruel jokes against transgender community. One of these shows is headed by a lawyer licensed to practice before the high courts of Pakistan.

Restoring the Dignity of Transgenders

In 2009, the Pakistan Supreme Court delivered a seminal ruling, recognizing the dignity of transgenders and declaring them the third gender under the equal protection clause of the Pakistan constitution. Article 25 states that "there shall be no discrimination on the basis of sex." The Supreme Court noted that transgender persons have been neglected "on account of gender disorder in their bodies." They have been denied the inheritance rights as they were neither sons nor daughters who inherit under Islamic law. Sometimes, families disinherit transgender children. To remedy discrimination against transgenders, the Court ordered provincial and federal governments to protect transgenders' gender identification, right to inherit property, right to vote, right to education, and right to employment.

Despite this groundbreaking ruling in a conservative Islamic country, which must be welcome and which carries instructional values for the United States where transgenders are still fighting for equal dignity, there are some troubling aspects of the Court ruling. The Pakistan Supreme Court compares transgender persons with "disabled persons" and articulates their gender status as "gender disorder." There is no need for courts to engage in fruitless parallels nor does it advance the rights of transgenders when a high court labels transgender as gender disorder.

The Qur'an is clear on genetic determinations by pointing out that Allah is the "One who shapes you in the wombs as He pleases." (Qur'an 3:6). All shapes, that is, all physical traits including sexual characteristics and inclinations of a human being, come with the pleasure and permission of Allah." Every child -- male, female, or transgender--has the equal blessings of God and there is no justification for parents, courts, or governments to engage in gender-based ill-treatment.