Recently the UN put out photographic essays on what people really think of women and gays based on the Google auto-complete feature. The results were as awful as you would expect. However, I was bothered that the part claiming to represent the LGBT community only used the word "gay" to represent all of us. Society and the LGBT community perceive "gay" and "transgender" very differently, and the Pew study from last summer illustrates this.

This weekend I repeated the Google auto-complete experiment using the words "transgender" and "transsexual," and the results were indeed different. They were also awful, depressing, and horrifying all at the same time. Afterwards I teamed up with a trans male friend (who does a lot of artwork I admire) to put these results to pictures. We hope that there is something to be learned, and that the folks at the UN will recognize that the stereotypes we're fighting vary by community. 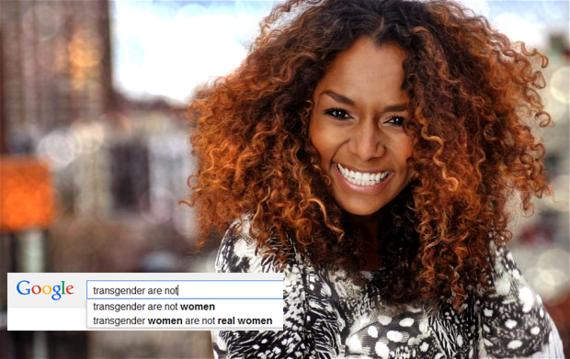 I paired up these auto-complete results with this picture for two reasons. The first is to illustrate how asinine the auto-complete results are. Janet Mock is a beautiful, talented, brilliant, and incredibly eloquent woman, and it takes a strong aversion to reality to deny that. Second, this overriding message of identity denial contributes to the sense of hopelessness that many transgender people feel. If people who hate us cannot acknowledge the reality of Janet's identity, what hope is there for the rest of us? 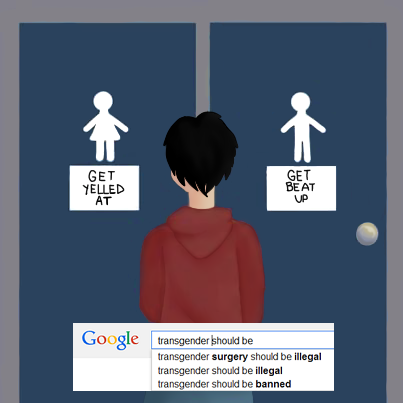 Many people seem to wish that we would just go away, or that some law would force us all back into the closet. The Arizona bathroom bill from last year was an expression of the sentiment shown in these auto-complete results. The belief that transgender people shouldn't have access to medical care, and the issues that that creates, are also illustrated here. 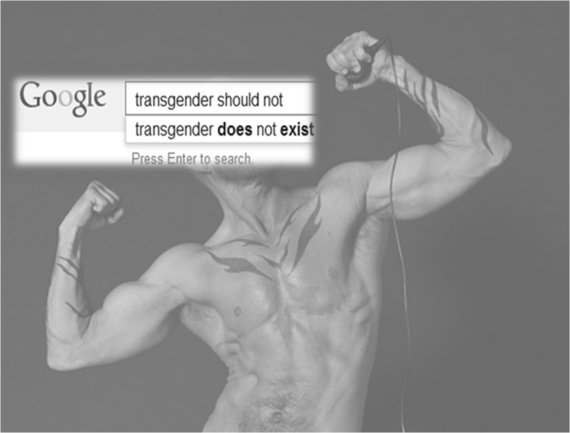 There are lots of people who believe that transgender people, or alternative gender identities, don't exist. Religious conservatives, fringe psychologists and psychiatrists, reparative therapy proponents, some radical feminists, and sometimes even other LGB people express this idea. I chose a photo of a trans man, made it transparent, and blocked out his face, because as a group they face erasure of their identity in so many ways. 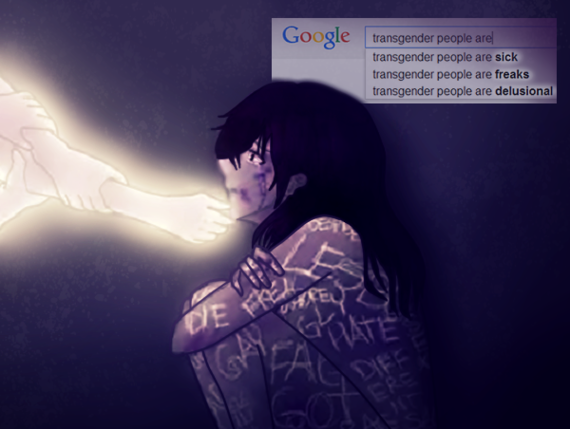 A lesbian friend and colleague who has been battling for LGBT rights since the early '80s once told me that transgender people are some of the most incredibly spiritual people she has met. Given the words typically used to describe us, how deeply they cut, and how omnipresent those narratives are, is it any wonder that so many of us look outside the earthly realm to find something to lift us from despair? We certainly won't find it here. 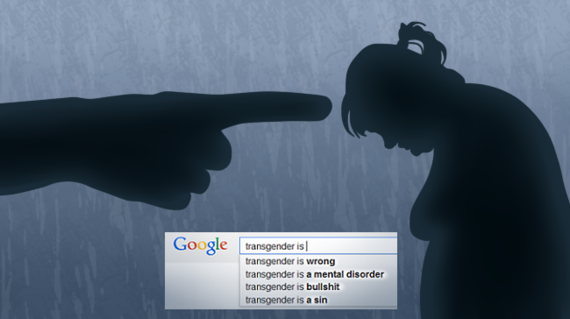 When it comes to labeling transgender people in ways that we cannot fight back against, both religion and science find a way to chime in. Religious organizations tell us to hate ourselves for being too weak to resist the sin of living as ourselves, while fringe medical and mental health professionals are more than happy (sometimes with a glee that borders on sadism) to provide other labels that deny our identities while reinforcing our "wrongness." 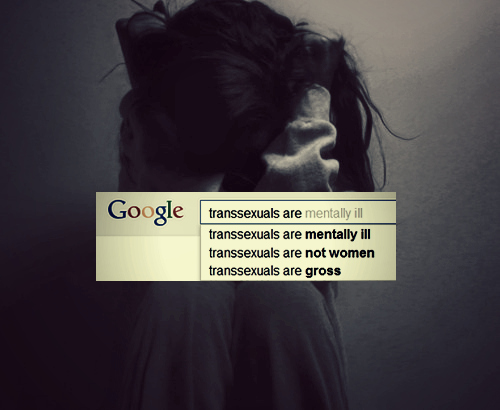 This particular set of Google auto-completes encapsulates the messages in our culture that there is nothing about a transgender person to be loved. Accepting ourselves, and reconciling it with what society says about us, requires us to accept that we have no value. Transgender people are forced to either completely reject the entirety of our cultural wisdom or despair. 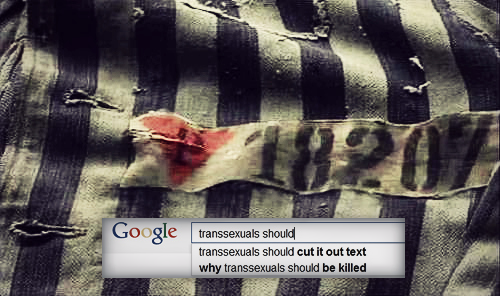 More than any other message, this should disturb people. One of the main messages about transgender people is that they should be killed. Historically there have been many times when a culture decides that a group of people within it has less than zero value. With the transgender community, we're already there.

Thanks to Hiro Ash for helping me edit and clean up the photos.