On Jan. 19, 2013, I was ordained as a the first transgender priest in the North American Old Catholic Church. I am a rather unlikely priest. I grew up in a fundamentalist evangelical church that taught that women should not be ministers and that LGBT people were going to hell. My gender was assumed to be female at birth, but something about that never felt right to me. Around puberty I started to feel a discomfort with my body, but I had no words to explain what was going on. Around this same time I started to feel called to be a pastor. These two realizations about myself would continue to grow together and complicate one another.

I desperately wanted to be a part of the church, but so often I felt pushed to the side. I never felt like I fit in. I didn't have the perfect, shiny life that it seemed everyone else had. I always felt like I was pretending to be something I wasn't. I was pretending to be straight, pretending to be a woman, pretending to be happy. I feared that if I told people who I really was, I would be rejected. I struggled with my gender identity (even though I didn't even know those words at the time) and my attractions to women. I left the church of my childhood after I graduated from college. I came out as a lesbian (even though that identity never really seemed to fit). When I was in my 20s, I first learned about transgender people. I read everything I could get my hands on, and the pieces finally clicked into place. Finally I had words to describe the discomfort I had felt growing up. I transitioned to male when I was in seminary, studying to be a minister.

When I transitioned, I worried that I would never be able to find a church that would be willing to ordain me. I still felt called to serve God as a minister, but I had no idea how that was going to happen. Though there have been great strides in acceptance of lesbian, gay and bisexual people in the church, the progress for transgender people has been much slower.

I first found myself drawn to Catholicism through the lives of Philip and Daniel Berrigan, best known for burning draft files to try to stop the war in Vietnam, and Dorothy Day, who founded the Catholic Worker movement. I was moved by their commitment to justice issues, but I was also inspired by the deep spirituality they held. Daniel wrote reams of poetry about his relationship with God, and Dorothy made it a point to go to Mass each day and to pray the rosary. So many people in the church I had been involved in had been either/or: Either you had a deep spirituality but didn't care much for justice, or you worked hard for justice but had trouble talking about how God made you feel. I wanted -- no, I needed -- both.

But there was a problem. The Roman Catholic Church doesn't want anything to do with someone like me. The hierarchy said that because I am a transgender person, I am intrinsically disordered. They say that my gay and lesbian friends and family have no place in the church, and they say that women need to stay in their place. They cover up abuse and spend money on things that don't benefit anyone but themselves. I couldn't be a part of this organization even if they wanted me, which is unfortunate, because there are so many amazing Roman Catholic priests and sisters whom I count as my colleagues and co-workers.

I had no idea that the Old Catholic Church existed until the presiding archbishop reached out to me on Twitter. He told me that the North American Old Catholic Church was a progressive Catholic group (not in communion with Rome) that ordains women, LGBTQ people and married/partnered/divorced people. They embrace traditional ritual and modern practice. They care about social justice and new church starts. It was exactly what I had been looking for. Here was a place where all people are welcome at the table.

I submitted my paperwork and was ordained first to the diaconate. That ordination happened at the Philadelphia Transgender Health Conference in June 2012. It was held there to make a statement that this is a church where gender identity is no barrier to living out God's calling.

It felt like coming home, not only to the church but to myself. All the years of searching for a church where I felt welcome, all the years of struggling to live out my calling in the midst of being told that I wasn't wanted -- all that had now come to an end. I was in a place where I could be all of who God had called me to be.

My sense of alienation from the church has caused me to cling more tenaciously to a God whom I know loves me and everyone else no matter what, and it's that message that I want to pass along to others. God loves you, and there is a place for you in the church. I know that not everyone wants to be a part of a religious community, and I respect that, but for those who do, please know that there are religious communities that value you and where you don't have to hide any part of yourself.

Check out photos from my ordination: 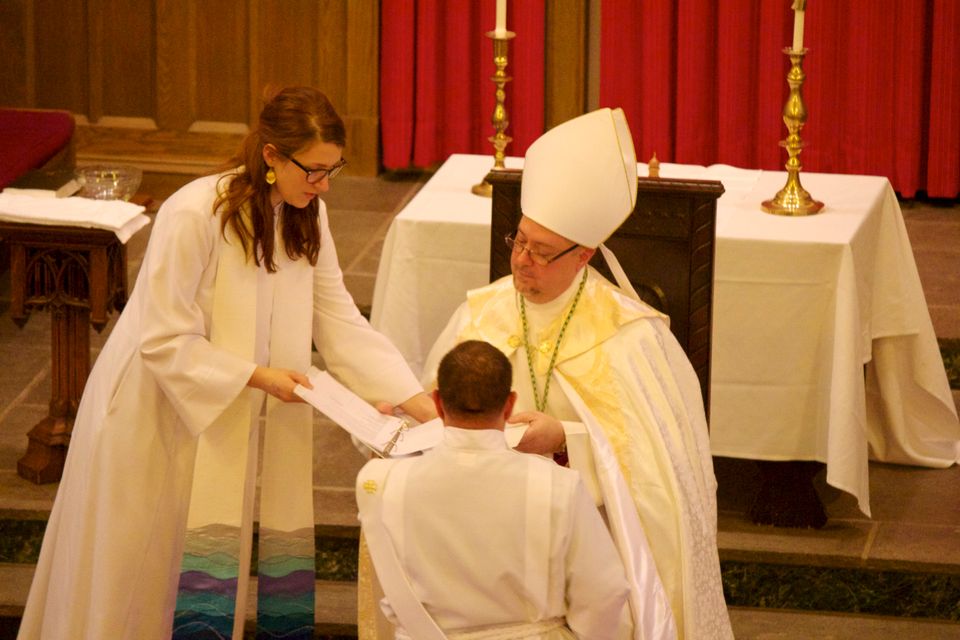