A transgender teen is slated to play a role on theUSA Network's "Royal Pains" in conjunction with a new public service announcement from the network, which is sponsored by a partnership withPFLAG, the nation's largest LGBTQ family and ally organization.

Trans teen Nicole Maines will make her acting debut on medical drama "Royal Pains" playing a trans choreographer who discovers that the hormones she is taking may be endangering her health. The episode, premiering Tuesday, June 23 at 10pm ET, will also include a special PFLAG PSA featuring "Royal Pains" star Mark Feuerstein that aims to raise awareness about transgender issues while offering support and services for the trans community. The PSA can be viewed above. 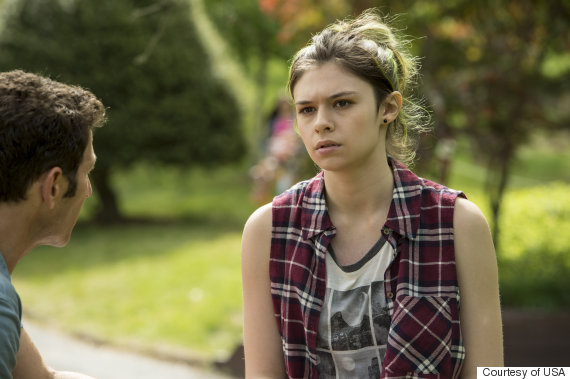 “We are thrilled to be telling the story about Anna, a transgender teen, in this episode of 'Royal Pains," Executive Producers Michael Rauch and Andrew Lenchewski said in a statement sent to The Huffington Post. "Spreading the word about the complicated issues that arise in identifying as transgender and about how crucial support from friends and family and quality healthcare is, in making transitioning less stressful, seemed not only organic to our medical show, but an important story to tell. In telling this story, casting a transgender person was essential to us. The opportunity to have Nicole Maines, a transgender teen herself, who in her acting debut proved to be a very talented actress as well, was deeply gratifying. Nicole brought the character of Anna, written beautifully by Carol Flint, to life and depicted her with strength, intelligence and humanity -- all traits Nicole possesses herself. We are very proud of this storyline, of the episode and of the opportunity to work with Nicole.”

In 2014, Maines was honored as one of Glamour magazine's 50 inspiring women of the year for her crusade to ensure trans teens can use the bathroom corresponding to gender they identify with. Her father, Wayne, has regularly (and beautifully) blogged about his daughter for The Huffington Post.

For more information about "Royal Pains," head here. For more from PFLAG, visit its official website.