A self-portrait is a representation of how we see and document ourselves. Self-portraiture can record desire for who we can become or be a critique of who we are at the time. A portrait can also depict movement, expression and mood within the strokes of medium. To create a self-portrait, a mirror is a necessity to view the reflection of one's self.

As a high school art student, I had trouble analyzing that reflection of myself. Sure, I could paint a landscape or draw up an architectural scheme, but portraiture was a different story. This story only created trouble in my art classes, where I was critiqued and graded regularly on art that included self-portraits. I was in my freshman year of high school when I realized just how painful it was to see myself in the mirror as I was: a 14-year-old girl on the brink of puberty. Speaking as a 17-year-old boy, it makes a lot of sense now -- my appearance struck conflict with my identity. And I've just begun to reflect on this pain as I assess my self-portraits created during the initial climax of transitioning to a different gender through my high school career.

Freshman year of high school, I definitely knew there was something wrong with my view of myself, but blocked out any inkling of exploring it since I just wanted to fit in with the rest in my peers. I didn't want drama to start my high school career. My first assignment of the year in starting my visual arts coursework was a self-portrait that displayed one's head and upper torso. I had focused on art in years prior, but explored little in the realm of portraits. After all, self-portraits were so common, I wanted to focus on the world around me. Not me.

My outcome was a smudged and over-corrected portrait of myself. The over-correction came through erasing and trying to draw myself as I looked -- not as I wanted to look. I had also drawn myself in a bulky, dark sweater with nary an indication of a body underneath. I was just as disconnected with my body as I was with my reflection. To complete the portrait, I drew my hair to cover most of my face. I didn't want to see myself as I was, so why would anyone else? Everyone else's portraits were wide-eyed and happy. We were freshmen with so much opportunity and promise, and I just didn't display that in myself or in my art. My background, like in the portrait, was a cloud of darkness and uncertainty in my future and in myself. I received a B-. 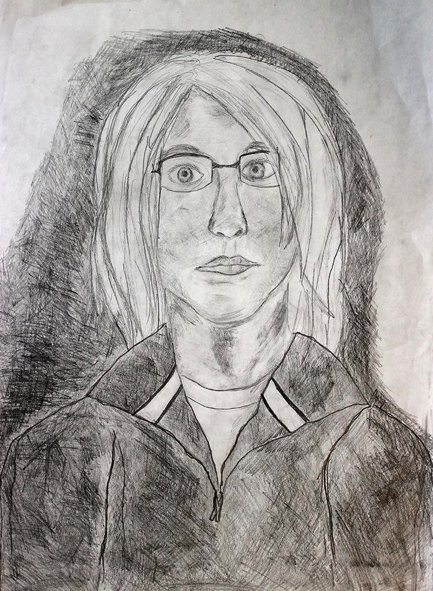 Sophomore year, I returned to school and displayed my love of painting landscapes to the art department. I started finding my niche and blocked out any further attempt to find myself because I was doing what I loved. But this didn't last for long. While researching my symptoms of denial of my appearance, I stumbled on the word "transgender," as I once had in middle school upon initially questioning my sexuality and identity. I came back to the word with the same doubts and internalized fears. "That can't be me." "I wouldn't be displaying my 'true' self." "But what if that is myself?" "No one would talk to me."

After months of constant debate with myself, I came back to square one. That's who I was. That's who I wanted to be. It made so much sense. I had aspired to be Peter Pan at age 4. I made it clear on the playground that I wanted to be treated as one of the Jedi -- and not as Princess Leia -- among my male peers. They called me a "tomboy" early on and "butch" later on for my clothing choices and actions. But that wasn't me. I wanted to be me, a boy who painted landscapes and wore glasses. So I came out. The same month, my painting teacher gave a self-portrait assignment and handed out the mirrors.

I was initially excited. I would finally have a chance to paint the "new me" -- the "real me." Short hair, button-down shirts, and all. I did smile into the mirror, I remember that clearly. But then, I realized how feminine my facial structure was under all of my "new" masculine presentation. And that's where my reflection became my enemy again.

While beginning to paint and zone into my thoughts I also remembered the shame I subjected myself to. I was at a point where my parents didn't understand. I was at a point where I had to argue with them each day about who I was. I was at a point where friends started packing up and leaving. It was so exhausting to be me. I feel that was displayed clearly through my art. I chose a blue and grey color palette that struck a chord with me; they matched a dreary day in my body and my life. My growth in art showed through some proportion and expression work. But otherwise, it was as bland as my expression, sad and waiting for my own palette to lighten up. I received a B. 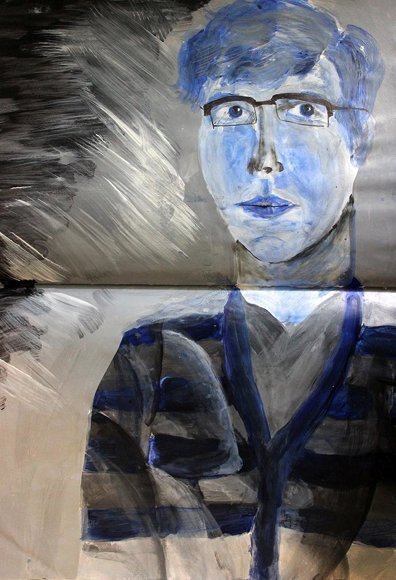 Junior year was a fresh start. It was the first school year that I would be out for the entirety of the year. I saw a gender therapist to better understand myself and calm my anxieties about my being. I had gained new friends who saw me for the start of who I really was. I woke up happier with promise and my family showed their support with no argument and the highest of support. My junior year also saw progression in the mediums and techniques I employed through my art, after hours of experimenting through the summer.

A new school year also meant a new portrait. This time, the assignment called for a pattern-usage somewhere in the foreground or background. This time -- excuse the '80s music reference -- I showed my true colors. I looked in the mirror and saw myself physically changing from testosterone. And I appreciated my reflection. I decided to incorporate testosterone's physical structure as my pattern and layered it into model my form. As I started, my peers commended me on creating an "accurate" portrait as well as incorporating a pattern. I even smiled. My chosen pose was a resting position. And that's just how I felt. I could rest and just relax because I finally found myself. And my color palette? Bright and vibrant. I received an A+.

It's been eight months since I created the third portrait and I am now a senior in high school. In reflecting on my transition, I often come back to these three snapshots of my life.Uncertainty, denial and acceptance. My reflection in the once-dreaded mirrors isn't something I deny, but something I can put under closer observation and render to show who I am now. After my own transition, I've found fascination in structure and transition in nature at a molecular and chemical level. My concentration in art now rests in scientific identity and uses the same principles in my third portrait of incorporating chemical structures to describe my subjects. I have since made several portraits and have received better grades from my art teachers as the confidence in not only my work, but in myself, rises. 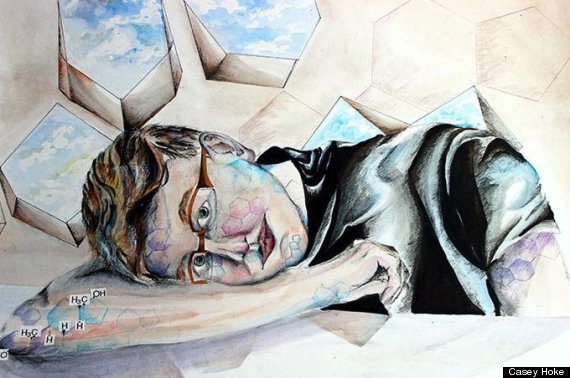