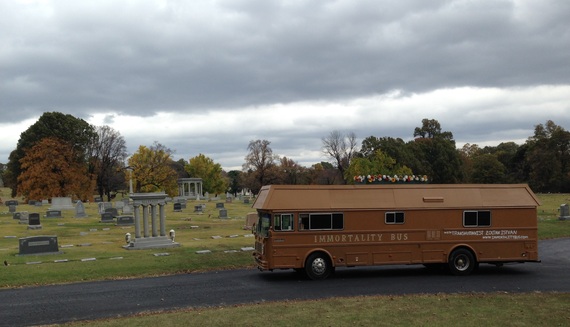 A little over a year ago, I left on a wild adventure aboard a nearly 40-foot bus designed to look like a giant coffin. Partially built in my front yard in the San Francisco area, the Immortality Bus caused waves and controversy wherever it went. It was a blast to drive it in some of America's major downtown areas during rush hour traffic and see many people gazing at it (and typing in the website written on the side of the bus on their smartphones).

As a science and technology-inspired presidential candidate for the Transhumanist Party, my candidacy has been a strange and unique journey. The coffin bus has so far been the wildest part. The bus was designed as a coffin to remind spectators of one thing: We're going to die.

The good news is that many transhumanists like myself believe the #1 goal of science is to overcome death with radical new technologies, like CRISPR gene editing, bionic organs, and age reversal techniques.

Transhumanism will be successful in stopping death. Money into the field has significantly increased in the last few years as more and more scientists come to believe that indefinite lifespans are possible.

The Immortality Bus was a controversial spectacle to spark conversation about this idea. And we need conversation, since living far longer lifespans is already happening. There's simply no way social security, welfare, and Obamacare can keep up with the sharply longer lifespans of Americans (lifespans have doubled in the last century). Barring a tragedy or terminal illness in the next 25 years, most Americans under the age of 50 will have the option to live forever. As a society, we need to figure out how best to deal with this. 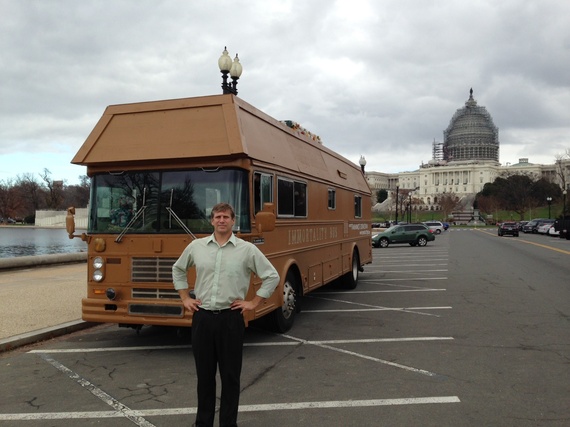 Along my four-month bus tour, which ended in Washington DC with the delivery of a Transhumanist Bill of Rights to the US Capitol, I reaffirmed one of the main reasons transhumanists face opposition to life extension. The middle of the country is very religious and bent on believing that death is both natural and desirable. Transhumanists--many who are atheists or nonreligious like myself--call these people deathists.

The Bible says people should die. It also says people should not aspire to become god-like beings with indefinite powers. However, not all Christians believe that, or believe the Bible word-for-word. Last night I interviewed with Matt Carter, who is a Christian. Carter runs The Break It Down Podcast and is also a musician. He didn't seem at all perturbed by the radical technologies that are starting to affect human beings, like genetic editing and coming artificial intelligence.

That doesn't mean Carter wants to live forever, or will accept huge amounts of radical science in his life. But he is willing to let others do that. And in the end, that kind of open-mindedness is what has made America so great--and the leading science nation in the world.

With that in mind, I want to reiterate some of the ideas I recently wrote about last week in the San Francisco Chronicle. Transhumanism is genuinely changing things about the human species very fast. The amount of technological change that happened in the last 10 years will now happen in the next five years. And then 2.5 years...and so on. Technological acceleration is a fact of life. The best way to deal with it is by open discussion of the issues. And when we have that discussion, we must not focus on the past as guidance, but on reason and what's possible of the human being. 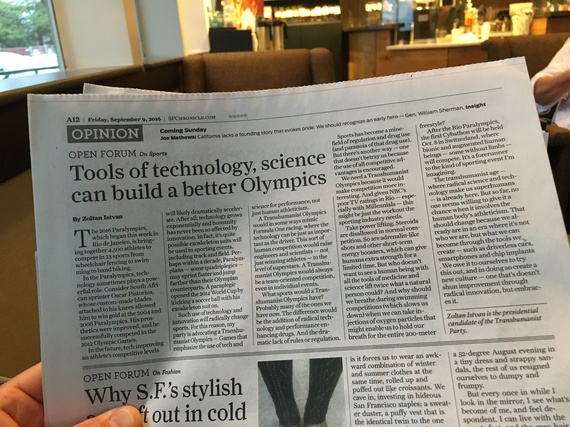 My SF Chronicle article was about a future Transhumanist Olympics, where people use technology and drugs as they wish in competition. All forms of performance enhancing drugs and tech are encouraged. With this kind of sporting games, not only will new records be broken, but new sports will be born. And that is something that would be very exciting to watch and participate in.

Give the story a read, and decide if you'd like to hold your breath for 15 minutes when doing the 1600 meter freestyle, or be able to throw a javelin into the parking lot from the arena, or use an exoskeleton suit to sprint far faster than Usain Bolt.

The future will be here soon.