A new school year will be starting in a few weeks. It will be the eighth school year since I moved into a little house across the street from a school.

I was so excited that I didn't need to move into an apartment, what with beginning my transition and all that. Coming and going. Sometimes as Steven. Sometimes as Stephanie. I worried a bit about sometimes presenting as male, sometimes as female, and how that would work out. It is an elementary school. Would some teacher or parent notice and realize that there was a transgender person living so close to where their children played on the playground? Of course, being transgender does not increase the likelihood that a person will be or do anything inappropriate. Unfortunately, many people believe that it does. There are many people who think that transgender people are a danger to children. There is no doubt that being publicly transgender increases the likelihood that I will meet with violence.

These were the first, frightening days outside the closet. Finally living in the daylight but feeling very exposed and very vulnerable. Trying to be careful and aware, especially when the children were in the schoolyard. By the end of that first school year, I was living full-time as Stephanie, and I was much more comfortable but still cautious, still not completely confident in my true person. I remember one day in particular when the children were outside playing and I was planting some flowers in the yard. I heard the children yelling, "Hey, lady!" I didn't pay much attention to it. Then the children yelled again, "Hey, lady!" As I looked up, I realized that they were yelling at me. "Hey, lady! Will you get us the ball?" they asked. I immediately jumped to my feet and ran to the ball. No doubt there was great joy on my face as I tossed the ball back over the fence.

Not long after that, a friend of mine, a teacher at the school, saw me arrive home for lunch. She yelled, "Stephanie!" She came up to the fence, several children in tow, and introduced them to me as her friend. How wonderful to feel completely comfortable while standing there and visiting!

A few years later I was traveling the state doing presentations about what it was like to be transgender and working through political activism to help make legislative change. When people would find out that I identified as both transgender and Christian, they would sometimes ask me questions about how I reconcile the two identities. If you ask me, it's a lot like reconciling the fact that I like chocolate with the fact that I like cats. There is nothing to reconcile. However, for some people, it does not seem to be that simple. I won't get into the long version of my answer to such questions. Suffice it to say that I would ask the same question to anyone who identifies as Christian but works to prevent equality for people who are lesbian, gay, bisexual, or transgender. How do you reconcile being Christian with discriminating against any group of human beings?

As I realized that identifying as both transgender and Christian was intriguing to some people, I decided to be more public about these two (of my many) identities. I went to makestickers.com and ordered a bumper sticker that said "Transgender and Christian." Of course, I thought about how that would be received with my car parked in front of the house across the street from the school. About that time I testified at the local school board meeting about the need to have protections for LGBT students and staff. And of course I self-identified as transgender and Christian. I'm pretty sure it wasn't a secret anymore. 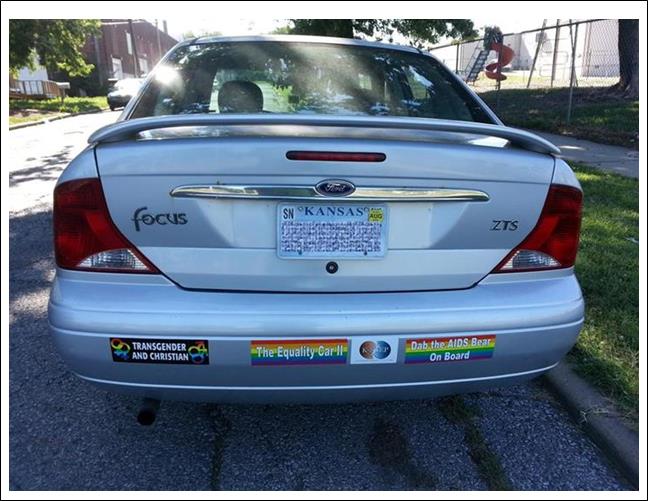 Needless to say that the new bumper sticker went on the car, next to the bumper sticker that said "The Equality Car." And I parked it in front of my house. From time to time, a parent would stop to look at it as they were walking their child to the school.

A few weeks ago a gentleman in another car made a left turn into the side of the Equality Car. The gentleman's insurance company determined that my car would cost more to fix than she was worth, so they gave me some money and towed her away. The sadness of that day was somewhat tempered by the purchase of the successor to the Equality Car. I thought long and hard about whether or not to put a new "Transgender and Christian" bumper sticker on the Equality Car 2. Neighbors next door and all that. Kansas highways and whatnot. Still across the street from the school.

In the end it came down to one thing, and there was no real choice about the bumper sticker: I am not ashamed of who I am; there is nothing wrong with who I am. In my educational presentations it is not uncommon for someone to ask me, "Why would a person be public about being transgender?" Suffice it to say that I answer that question with another: "Why not?"

A new school year will be starting in a few weeks. It will be the eighth school year since I moved into a little house across the street from a school. I can't wait.