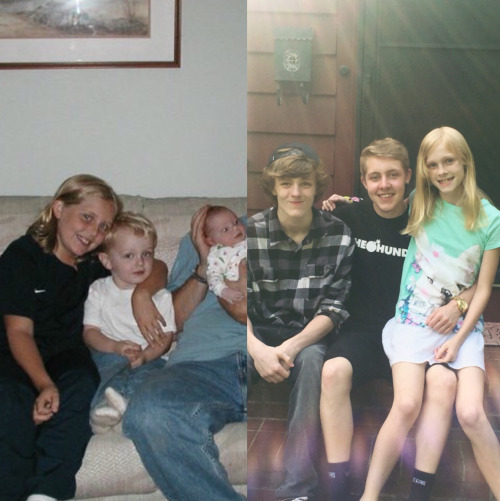 I was 18 years old, my brother was 10 and my sister was only 8 when I started living as male.

Before coming out as transgender, I was worried about how they would adjust to my change.
Would they be embarrassed? Would they have a hard time switching pronouns?

I remember the first time seeing them after I cut my hair. I was just getting off work and they were visiting my apartment for the weekend. I opened the door and instantly got the biggest hug from my sister. My brother was in the other room playing video games. They didn't react much to my haircut. I briefly just told them I was living this way now, and that I was much happier. I never told them much about transitioning.

Once I started testosterone, I felt the need to tell them more because I knew of the obvious changes to come. I told them I started weekly shots that were going to make me look like a boy. They didn't seem to care about any of that. They just wanted to spend time with me. Now in 2016, I've been on testosterone for over two years. My sister was the first to adjust to new pronouns, my brother right after her. My brother tells me all the time how he loves having me as a brother. It's insane how younger people are much more open than some adults. I love these guys and I'm forever grateful for their support.