Americans as a whole are a patriotic bunch. We don't stand for the idea of people taking away our freedoms. We will stand on the hill tops proclaiming how important our freedoms are to us.

But what is puzzling is that when black Americans and their allies stand up for their freedoms- when they stand up to resist their own oppression, it suddenly seems to be a foreign, uncomfortable condition for some Americans. 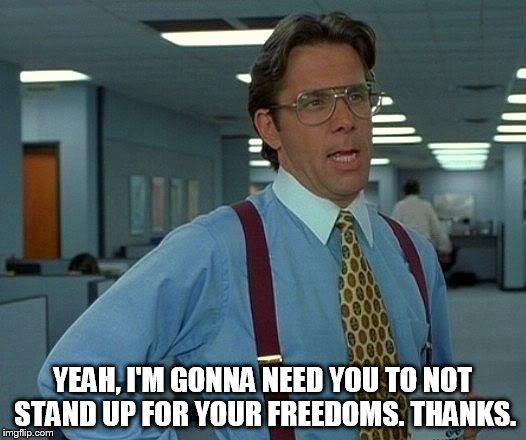 Yet - some of these same Americans will go on tirades if you suggest that their perceived rights or liberties will be in any way jeopardized. 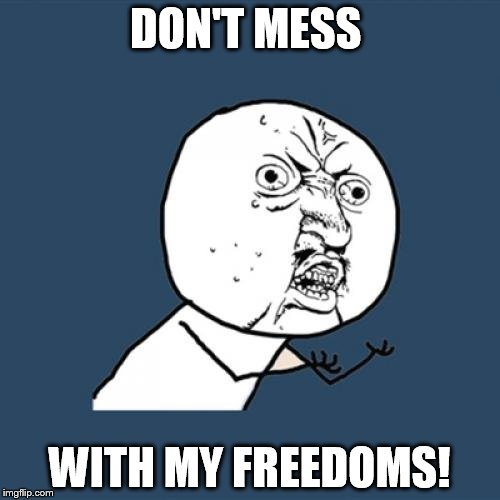 Are you just as floored as I am at the people in your life that respond to the Black Lives Matter movement with the frustratingly degenerating insistence that "All Lives Matter?"

When I had my gall bladder removed in 2010, I can't imagine my surgeon saying to me, "Yasmina, ALL seemingly useless bodily organs matter," and then proceeding to take out my appendix instead of my gall bladder - leaving me with the inability to enjoy cheeseburgers any longer without doubling over in pain - and then sending me the bill. I would have been pissed because in 2010 - my gall bladder mattered. It was in bad shape, causing me unnecessary suffering. It needed attention.

What part of completely KIBOSHING a black person's right to call out their own oppression do non-black folks not understand? (I say non-black folks because it doesn't come from just the majority white offenders; but, I see it coming from Hispanic and other minority race groups too.)

At this point- I am leaning towards people being willfully ignorant. The All Lives Matter crowd refuses to acknowledge pain or suffering that does not pertain to them personally. In fact, it inconveniences some white people to listen to the sufferings of other humans they share the planet with (and whose suffering they are actually part and parcel to) so much so- they act as if they are the ones being oppressed. 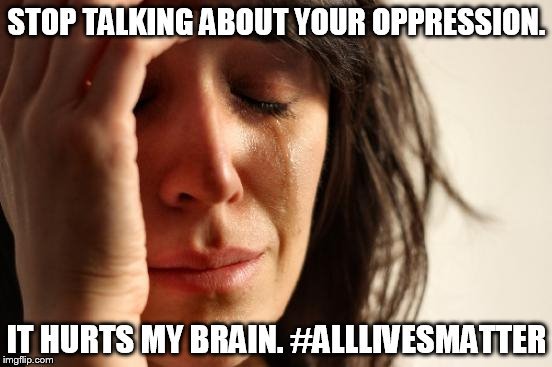 How can we translate the "arguments" that come from the All Lives Matter crowd to show what they are really trying to say? Here is my attempt below:

Argument: "But ALL lives matter!"

Translation: "Your oppression is not on my radar. So much so, that I cannot even fathom nor understand the idea that you are standing up for yourself. In fact, I need to make this all about me. You think you're better than me? You're not better than me! My life matters too! All lives matter!" 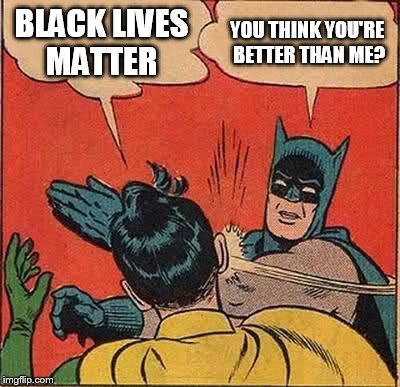 Translation: "I refuse to acknowledge that though in the minority; some bad cops exist. Of course I have no problem attributing any bad behavior on the part of black people to the entire black lives matter movement- hell- the entire black race. I know that is completely hypocritical, but it sounds patriotic and allows me to continue to not face the systemic racism that actually exists inside my country. I can continue to bury my head in the sand." 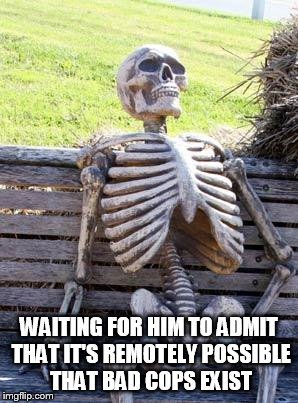 Translation: This one is easy for me to answer! I'm a Muslim American. My peeps get called terrorists all the time! Why? It broad brush strokes an entire group of people (by race or religion) as something to fear. "I refuse to acknowledge that black people have rights. I refuse to acknowledge racism. Instead- I will call the BLM movement as a whole a "terrorist group" which by default makes black people terrorists which means you should fear them. Chock another one up for the white folks." 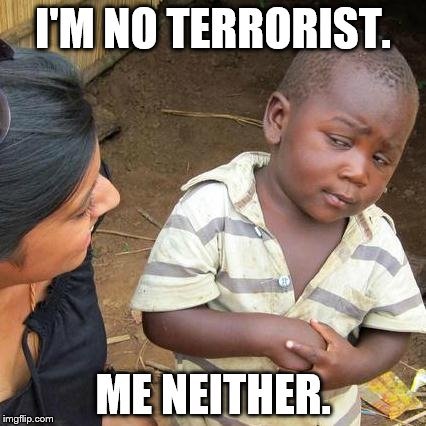 Translation: (Umm. Can I skip this one?) 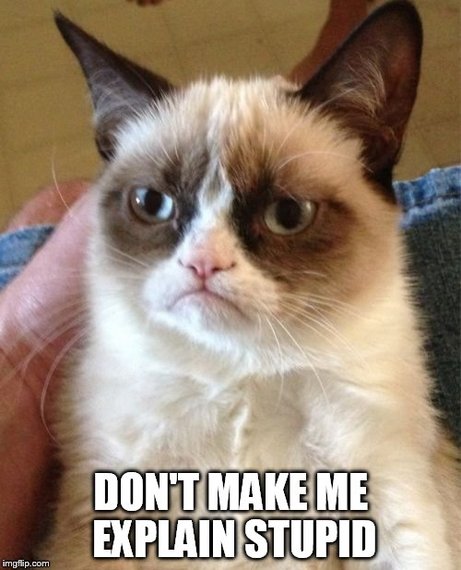 Translation: Backbiting and defamation is about as low as you can go that I don't even consider it an argument. "I'm racist through and through. I have no problem dehumanizing people that aren't white like me. I'm even willing to use right wing hate blogs that hail from bona fide hate groups to prove my non-existent points. And by the way, cops can be judge, jury and executioner if the alleged offender is black." 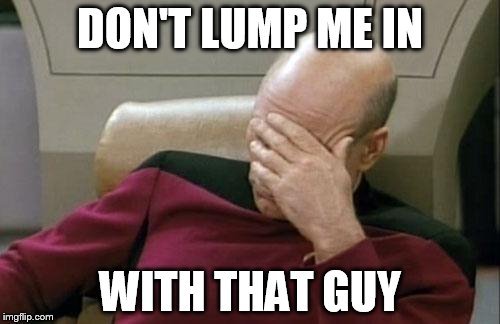 Argument: "But what about black on black crime?"

Translation: "I have no cognitive abilities to see beyond the sensational headlines and critically analyze the conditions of poverty and oppression that take place on my own soil that are the result of systemic oppression that has taken place since America's birth. My brain is just too small to deal. It's easier just to hate black people and back that up with straw man arguments." 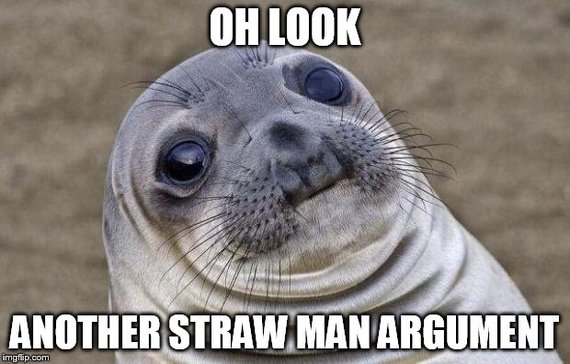 Argument: "I have a right to stand up for white people."

Translation: "I am so entitled and privileged, that I actually believe my skin color makes me superior to people with non-white skin. I probably had racist parents that raised me in a racist household since hatred and racial superiority is learned. I'm a bona fide bigot." 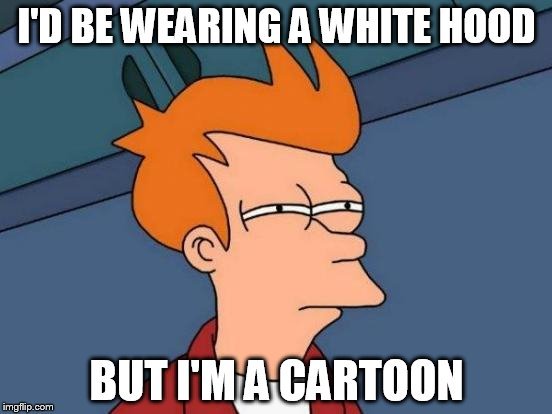 Argument: "I have black friends." 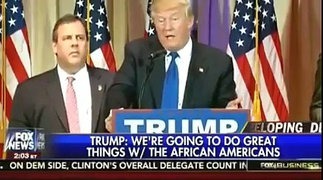 Argument: I'm going to hire this white girl to discuss black traditions, customs and styles {or insert other numerous examples.}

Translation: "I am culturally appropriating blackness for my own monetary gain- not really spreading an appreciation for said culture. If I am doing so while not supporting the black lives matter movement, I'm a real douche bag." 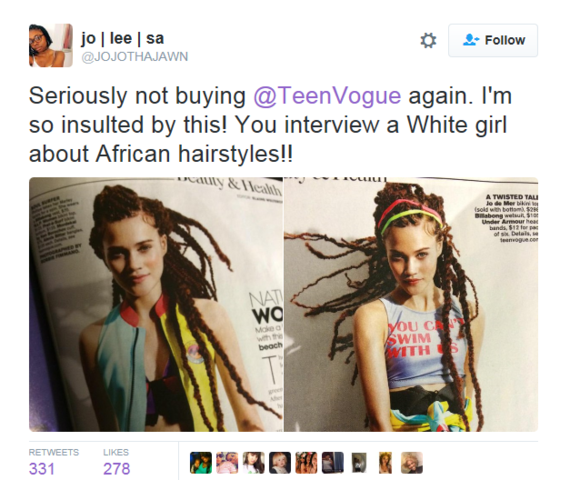 So the next time your friend, acquaintance, neighbor, co-worker or whoever tells you that all lives matter, show them this article. (Not that it will change their mind if they are willfully ignorant.) And then send me their picture so I can make a meme out of it. In the meantime, this issue really is black and white. Either you are part of the problem- or you are part of the solution.

Which one is it gonna be?