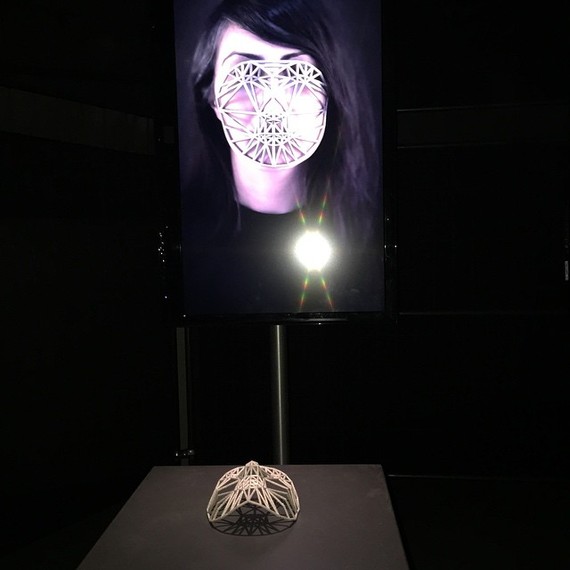 Transmediale is an ideal event for taking the moral temperature of the alternative Internet crowd. This year: feverish.

The theme was certainly well chosen: "Capture All", meaning everything instrumented, everything streaming data under surveillance. The total act of monitoring, the gesamkunstwerk of Big Data: but for who, why, how?

The resilient Berliners have now gotten over the first existential shock of NSA Snowden revelations. They know pretty well where they stand now. The intelligence services are simply in command of the government; no amount of mere political embarrassment is going to pry the spies loose from the switching centers: the spooks are too useful to the politicians, so they're going to cast aside the pretense of the rule of law and simply brazen it out, Putin-style.

Everybody who matters now knows that Snowden told the truth, and nobody bothers to deny the reality, but the activists of electronic civil liberty are in for a long battle as a sidelined dissident group.

That's why an outlaw activist like Peter Sunde is now smiled upon by the Berlin artists' crowd. Sunde just came out of prison. He is not an artist but a well-practiced pirate, a Swedish ideologue who was using national boundaries to hack intellectual property national regulations. The powers-that-be had to invent some method to punish him and arrest him for freeing all those Hollywood movies, and, with much effort, they did. So Sunde and his two Pirate Bay colleagues have all been in prison under some rather far-fetched legal charges.

By inviting Sunde to deliver the opening speech, the Transmediale is showing its awareness that modern net.art can also involve jail time nowadays. Net art is of some hairy consequence now: it's no longer merely the usual viral and transgressive publicity stunt, followed by empty threats of lawsuits from some offended party, far away. No: the repression has reached new levels, because so much more is at stake.

The intelligence service have learned to hack the democratic order, and of course that activity is just as formally illegal as Peter Sunde's pirate antics, but so what: it is all "just Internet!" Capture all the hot data you can get your hands on; of course others don't approve, but they're neck-deep in it, too, and just as crooked as you are.

Meanwhile, downstairs in the Transmediale basement exposition space, most of the artworks were fantasies of somehow escaping the alarming new reality. For example: elaborate masks that can frustrate compute facial recognition. What is the point of this? It' s like wearing an "Anonymous" mask in a street rally: it simply focusses the attention of the police, who will promptly arrest you for the act of wearing a mask.

Oriana Persico and Salvatore Iaconesi contributed one of their parodies: "Stakhanov the Big Data God." This mystic oracle, busily spying on Transmediale guests by combing through their social media profiles, spat out some rather typical prophecies of doom through an old fashioned line printer.

The twilight struggle among our planet's many booming cyber war spy agencies was recast as a contemporary multiplayer computer game. The NSA and its national rivals and civilian contractors slyly struggled to capture the world, Napoleon style.

Probably the most effective installation at Transmediale was also the simplest: Timo Arnall's slow motion videos of contemporary data switching centers. These colossal big data barns simply sit humming on the modern landscape, without one human being in sight, structures antiseptic and colossal in scale, fully algorithmic. No comment is made, or is necessary: we've built ourselves a giant fait accompli.

As time goes on, Transmediale seems more about presentations and workshops, and less about actual art, or the work of art. The early days of net art, when every art-hacker on the planet seemed to be thriving on the Internet's abstract, universal, level playing field, have been replaced by the modern situation of distinct social cults and viral clusters of interest. Rather than universal access and universal human rights to broadband, it's now about underground access, such as the "offline network" activists, who build devices carefully divorced from the Internet's spooks and property-cops. Plug in a small gray box with some wireless, and presto! fifty thousand art and theory books as text files, fully searchable! Nobody but you and your dearest friends ever needs to know about that.

The new "smart city activists" badly want Big Data, but only as a regional competitive advantage for their own towns. Having your town run "on the Internet" is now perceived as a genuine threat to well-being -- you'll surely get disrupted by the likes of Uber, or bullied by ruthless outlaw hackers, if there is in fact any real difference between the bullies of Uber and hackerdom.

The Maker scene has grown bored and unhappy with anything strictly digital: they want alternative artifacts, gonzo products, functional machines. Perhaps the strangest group are the "quantified self" zealots. These people have zero interest in limitless cyberspace, and a fanatical hypochondriac interest in mapping the interiors of their own bodies.

There was another important virus circling Transmediale this year: good old-fashioned influenza. A Berlin mob of four thousand people tramped through the snow and slush for the opening ceremony. It was a very impressive turnout, with everyone chattering, cheek-kissing and pressing the flesh while sharing wine straight from the neck of wine bottles. The instant result was a high-fever flu virus that ran rampaging through the attendees, as international and borderless as the crowd itself. We survived the bone-aching flu, and we'll be back for more, but next time we'll take the viral and the social a lot more seriously.