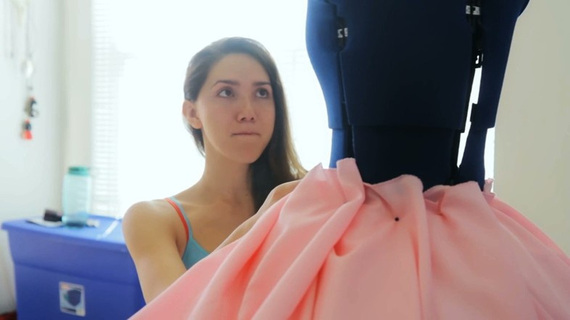 Last summer production wrapped on a small project called Transmormon, a 15-minute documentary focusing on the Haywards, a Mormon family whose transgender child was pursuing sex reassignment surgery. On the day that production wrapped last year, July 7, 2013, the family boarded a plane to Thailand to complete the process of "Eddie" becoming Eri.

Like much of America and other branches of Christianity, the Church of Jesus Christ of Latter-day Saints has been reexamining its position on marriage, gender roles, and sexual expression. It was only last year that they changed their position on female missionaries, allowing them to depart at an earlier age. But whatever may come of these new considerations for today's religious teenagers and their families, the world that Eri grew up in left no way to question her assigned sex, let alone articulate her gender identity.

As the documentary points out, the Haywards were conservative Mormons who were not sure how to respond to their child when she came to them, confused that she felt like two people -- the boy she saw in the mirror and the girl she knew herself to be. Eri's father, Ed Hayward, explains in the film, "She came to me one time, when she was probably about 4 years old, crying and saying that, 'Daddy, I want to be a girl.' And at the time I just thought she was going through some kind of a phase."

"When it was explained to [me] that I was a boy, it was because God had made me that way," Eri says in the film, adding that that "didn't make a really great relationship, as a 5 year old, between me and God."

Caught in the tension between the LDS Church's teachings and her gender identity, Eri created a fantasy world for herself. "For the longest time I kind of had this fantasy that I'd escape to that a fairy godmother would come and turn me into a girl and make everything better," she says.

On the outside, things seemed to have worked themselves out by her teens. "Eddie" was ordained to the priesthood in her church and appointed as first assistant to the bishop. At 16 "Eddie" -- identifying as a boy at this point -- began dating a girl from the church. The family relaxed, believing that things were getting better. "Eddie" was behaving less effeminately, but inside she knew something didn't fit. Because she really was attracted to boys, Eri felt she must be gay, so she came out to her community, trying to sort out what this meant and what she had been feeling. One of the hardest parts, she says, was watching her sister begin dating. "That was really hard. I was like, 'Of course. I'm this ugly boy, and my sister is this beautiful girl. That was a really difficult thing for me to deal with."

Eri eventually quit high school. "[B]eing at a Mormon private school, I didn't graduate; I just stopped going when I came out [as gay]," she says. The family decided to send her to Japan to stay with her grandparents in hopes that a change of scenery might help. One day, Eri was watching television when a panel on trans people came on. "My grandmother turned to me and was like, 'Oh, this is all about you!'" she recalls. 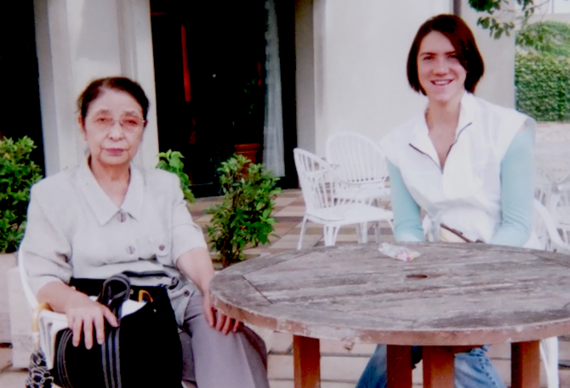 When she returned to America, Eri approached her father and told him what she felt to be true about herself. "[S]he came in to me," Ed Hayward recalls, "and she said, 'Dad, I want you to know I'm not really gay. I'm a woman that's trapped in a man's body, and that's why I thought I was gay." Again, a sense of stability came to the family -- a collective sigh of relief. They finally had a name to call the feelings that had persisted for so long: "transgender." But psychological incongruence began to surface. Eri began having dreams of cutting her penis off. The dreams began to increase in frequency, intensity, and violence. Suffering in "a really dark place" in life, Eri developed a plan to fulfill her dream and at one point even tried to perform surgery on herself. The family took preventative steps by seeking counseling and a diagnosis so that "Eddie" could begin hormone replacement therapy.

That was around the time that director Torben Bernhard heard of Eri Hayward's story. Bernhard had originally heard about Eri while working on a project for NPR's Salt Lake City affiliate, KUER, and began seeking her out to tell her story. In the process he found that Eri had developed a small Facebook following of people who were just as interested in her story as he was. "While discussing potential projects, a blog interview featuring Eri that had been floating around Facebook came up," he says. "As soon as I read the interview, I knew I wanted to make this documentary." That was July 1. Bernhard realized he had less than a week to capture the Haywards' story before they boarded a plane for Thailand and the opportunity would close. He and his crew hustled.

Bernhard had been raised Mormon as well, moving from one part of America to another. After serving as an LDS missionary in Thailand, he settled in Utah. It was quintessential Steinbeck, a physical expression of an internal reality as he sought to focus his own life. As part of that process, five years ago, Bernhard broke from the Latter-day Saints. Eri's own decision to do the same was a significant part of the Hayward story that he wanted to capture on film. He explains:

I know how hard it was, leaving the church, as I had gone through it myself. This is one of the first times I've ever been open about it. I know, without any of the challenges that Eri has gone through regarding her gender expression, that for me as a straight, white male, just going through that process of leaving the church and growing distant from the faith I had was tough. It was really hard on my family. 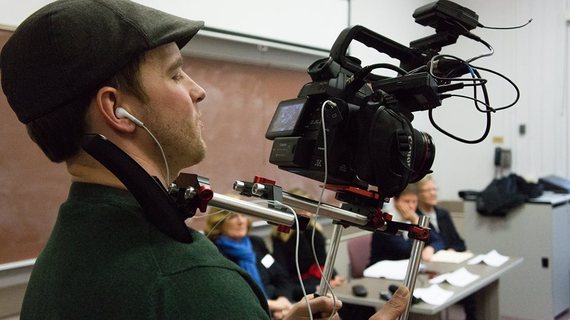 Bernhard grew up under the same church conditions that Eri did. In 1995 then-church President Gordon B. Hinckley issued a statement, "The Family: A Proclamation to the World," elucidating that God defines a family as a man and woman who are married with the intention of having children together. Those who strayed from this ideal "would bring upon individuals, communities and nations the calamities foretold by ancient and modern prophets." Hinckley said in 1998:

[W]e cannot stand idle if [gays and lesbians] indulge in immoral activity, if they try to uphold and defend and live in a so-called same-sex marriage situation. To permit such would be to make light of the very serious and sacred foundation of God-sanctioned marriage and it's very purpose, the rearing of families.

Citing Hinckley and the 1995 proclamation, Bernhard says he became frustrated with the tension between what had been revealed to the LDS leadership "for this moment of time" and what remained a "mystery left to be resolved." Bernhard felt that the LDS Church, as he understood it, was presenting people with an impossible dilemma.

Hinckley's "Proclamation" also categorically denied anyone whose gender identity was different from their assigned sex, stating:

In the premortal realm, spirit sons and daughters knew and worshiped God as their Eternal Father and accepted His plan by which His children could obtain a physical body.... We declare the means by which mortal life is created to be divinely appointed.

In other words, you were male before you were born, you were born male, and you will eternally be male. Any confusion about this would, again, "bring upon individuals, communities, and nations the calamities foretold by ancient and modern prophets." But there remains a large gap in LDS theology, the anticipation of further revelation. This anticipation allows mercy and compassion to be extended by the church in theory, but in practice it is often manifested in harsh ways. Bernhard explains:

It's very set and strict policy, so you have revelation that's not forthcoming or hasn't come yet. But on the other hand you have people that are directly affected by the fact that that revelation hasn't come. To put this another way, the church, as an organization, has strict policies regarding topics that are still awaiting revelation. So, though there is not very much that has been said about transgender members, they are still subject to discipline if they go through with sex reassignment surgery. To me that seems like a very hard line to understand.

Bernhard's mission to Thailand had exposed him to many people who were transgender. He knew them to be good people but "didn't really understand it at all, to be honest." He explains, "Thai culture is very accepting of transgender individuals, but at the same time, they're still often portrayed as caricatures in movies for comic relief." When he heard about the Haywards, he wanted to extend the compassion that he felt trans people deserved. Something compelled him to tell their story, exposing the tension that many other Mormon families have had to suffer through in silence. "I was really interested in bringing up that juxtaposition, the complexity of a family that is actually going through this and what it looks like, as opposed to a policy that is summarized in one sentence." 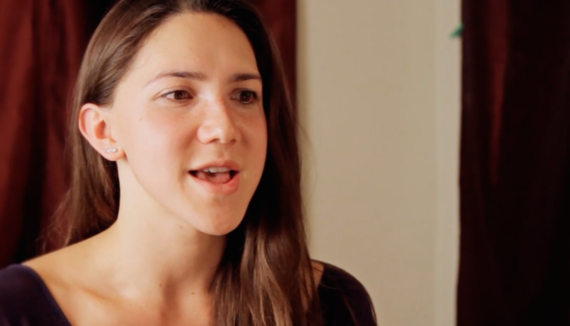 After Bernhard completed the documentary last December, several outlets began to congratulate him for bringing to light the church's stance on transgender people. He says:

I was with [the Haywards] and Eri on a panel about a week ago, and Ed was talking about going to his leaders early on, trying to understand what he should be doing as a parent, and at one point he received a response from his leader saying, essentially, "The church doesn't know any more than you at this time. There's been no revelation on it."

Still committed to his faith, Eri's father says that he believes the LDS leadership "are receiving revelation that helps them to be able to better serve in the callings that we're given in the priesthood." And he is aware of the 1995 proclamation, "which states very clearly that marriage is between a man and a woman. In my opinion, Eri is a woman, so I don't see a problem with that, and I'm hoping that the leaders of the church are going to see it that way, and that she'll be able to get married [in the Temple]."

Eri admits that she has stopped attending church with her family. In the last year she has spent a lot of time still thinking about the last several years and whether remaining in the LDS community is a challenge that she wishes to continue enduring. In many other ways, things have finally normalized. "It's really funny, because I spent so much time dreaming about how amazing and magical it was going to be for me to wake up and look down and to see my brand-new vagina," she says, "but when it actually happened, I looked down and thought, 'Oh, I am normal-me now!"

Watch the full Transmormon documentary below: