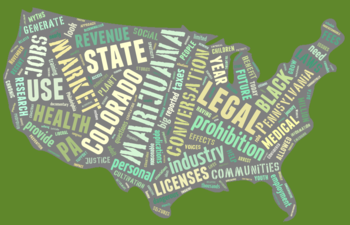 Nearly 80 years ago, the U.S. started down the path towards prohibition with the Marijuana Tax Act of 1937[1]. At that time, marijuana use was mostly limited to Hispanic, immigrant communities. As a result, marijuana prohibition laws were passed in a sea of racial prejudice and misinformation. Today, marijuana is widely used in the U.S., with nearly 20 million recent users throughout U.S. communities[2]. With 27 states (and D.C.) having legalized or decriminalized some aspects of marijuana[3], there is now urgent pressure on the U.S. Congress to remove marijuana from its schedule 1 drug classification as the most dangerous type of drug.

Over the past year, social justice issues have percolated to the top of U.S. national priorities. We can't ignore the social in-justices that resulted from marijuana prohibition. Our current drug laws are out of synch with the reality on the ground. Before we can imagine a new future with legalized marijuana, we must first shake off the dirty, heavy coat of stories that we've laid on ourselves.

Myths around marijuana have created a great deal of injury. People's lives have been destroyed due to arrest records. We've deprived countless patients from a helpful medicinal plant. We've neglected to foster a healthy commercial industry that could provide tens of thousands of jobs. Instead, prohibition has shunted billions of dollars into building criminal empires.

In spite of these problems, legalization skeptics remain concerned about a range of questions, asking if marijuana is:

•a dangerous health risk?
•a gateway drug?
•highly addictive?
•use leads to unproductive lifestyles?
•a pathway to moral decay?

Too often these and other questions are answered in absence of real evidence or clear facts. Today, we have actual experience with two states (Colorado and Washington) that have fully legalized adult use of marijuana for over a year.

Let's consider a "big picture" view of the journey towards marijuana legalization. We need to honor the complexity of the legalization question. Let's examine marijuana legalization through the standard "hot button" lens of health, crime and morality. Let's also broaden the conversation to include social justice, jobs and state revenue. Uni-dimensional views can be replaced with thoughtful dialogue that considers the many dimensions of legalization.

Let's re-imagine our laws having a healthier, more productive relationship with this plant. Thoughtful, inclusive conversations can lead to well-informed laws.

What will a future marijuana industry look like in my home state of Pennsylvania?

I enter this journey from the Commonwealth of Pennsylvania, where I am a lifetime resident. Pennsylvania (PA) is often seen as a mostly conservative state, marked with liberal constituents in the bookends of Philadelphia and Pittsburgh. Having spent my summers of my youth in the conservative coal region and my winters in the liberal suburban Philadelphia, I can attest to PA's different regions being "world's apart" in how we see things.

That's why I was surprised to see that a recent poll showed 69 percent of Pennsylvanians support medical or full adult legalization of marijuana[4]. "PA will legalize marijuana in some way, shape or form," said Robert R. of PhillyNORML, an organization advocating for reform of marijuana laws. He emphasized, "The train is leaving the station" when it comes to legalization.

I have heard reports that PA legislators have strong bi-partisan support for medical marijuana in our capital of Harrisburg. Is seems that the question is no longer "if," but rather "what," "how" and "why."

PA Senators Leach (D) and Folmer (R) have put together emergency legislation which provides critical relief (SB3) for the most severe chronic pain and spasticity-laden illnesses. I applaud them for working so quickly to assist families in desperate situations.

However, the conversation cannot stop here. If we hold our old stories up to the light, we will see that they disintegrate. Once we are no longer bound by these myths, we can envision a rich future with thriving healthcare access, adult use options and an industry that generates jobs, funds social programs and reverses incarceration rates.

Let's look at a state that has boldly stepped into this future world. Colorado legalized adult-use of marijuana in January of 2014. Colorado took the most liberal, open market approach in its' implementation of the new laws (compared to Washington state, the other participant in full legalization). The jobs and state revenue implications are significant. Keep in mind that Colorado has less than half the population of Pennsylvania. Yet, in a year over year comparison using data from the U.S. Bureau of Labor Statistics, it generated 54,043 more new jobs then Pennsylvania, comparing November 2013 vs. November 2014[5]. 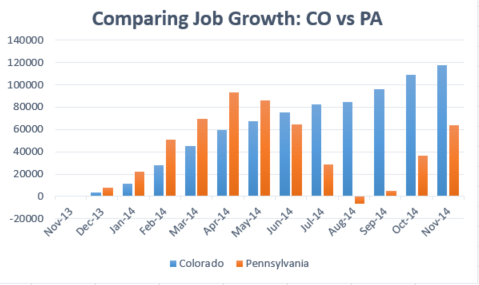 Graph computed using employment change from the baseline employment level of November, 2013, as reported by the Bureau of Labor Statistics.

Using data from the Colorado state government Website, we see that levied fees and taxes exceeded $65 million through November of 2014.

Colorado has added $8 million funding to youth prevention, mental health and community-based programs out of these new revenues[6]. Imagine what this kind of revenue could do for the state of Pennsylvania. With schools struggling and bridges crumbling, it is not hard to imagine where a new revenue source could be applied.

If you made it this far, I'd love to read your take on this topic in the comments.