(Reuters) - Tucked off a two-lane highway in a hilly, wooded section of central Massachusetts, a group of Roman Catholic monks has embraced a centuries-old tradition they hope can sustain their aging members in a world of rapidly rising health costs.

The 60 monks of St. Joseph's Abbey still rise at 3 a.m. for prayers and pass most of their days in silence. But when it is time for work, a handful head down to the monastery's new brewery, the first outside Europe to produce certified Trappist Ale.

The venture has proven to be less labor-intensive than the monks' other businesses, making religious vestments and fruit preserves. More importantly, they believe it can generate enough money to sustain a community of men with an average age of 70 who now spend about a third of their budget on health care.

"We're trying to reinvent our economy," said Father Isaac Keeley on a recent tour of the abbey's low-slung stone buildings and starkly modern 30,000-square-foot brewery, nestled in a wooded property some 60 miles (97 km) west of Boston.

Work has always been a part of life for Trappists, a monastic order tracing its roots to 17th Century France, with monasteries around Europe and North America selling products ranging from coffins to cheese. The goal of these businesses is to bring in enough cash to sustain a community of men who pass most of their lives in seclusion.

The Spencer monks debated the move into beer making for more than a decade, as more of their members aged and moved into the monastery's 12-room infirmary, which is usually full.

"The health costs are huge," said Father Dominic Whedbee, the abbey's 65-year-old prior, the group's second-ranking member. "Our infirmary is staffed 24 hours a day, seven days a week. That way we can take care of all our men for the rest of their lives, which is our commitment."

Supporting an aging clergy is a challenge faced across the Catholic church in the United States. While monasteries and similar religious orders operate outside the structure of local parishes and dioceses, many of which have paid heavy costs to settle claims of sexual abuse by priests, their members are also aging.

The Retirement Fund for the Religious, a Catholic group that acts as a last-gasp source of funding for retired monks, nuns and other members of religious orders, currently supports 34,243 religious people over the age of 70. It forecast that by 2023, there would be four times as many retired members of such orders as those who are still working.

The fund it operates is forecast to run dry by 2026, from $8.64 billion in 2010, according to a 2012 study done for the U.S. Conference of Catholic Bishops by human resources consultancy Mercer Management.

The problem is more acute among Catholic clergy than Protestants in part because Catholic clergy tend to serve for longer periods and do not marry, which means they do not have spouses who can help support them, said Cynthia Woolever, a sociologist who focuses on religion and publishes a newsletter on the Presbyterian church.

"They stay in the priesthood. It is a vow for life, whereas Protestants have a higher dropout rate," Woolever said. "Once you are a priest there really is a commitment on the part of the Catholic church that you are going to be supported and cared for life."

When the monks decided to begin producing beer, they toured a number of European abbeys, including Notre-Dame de Scourmount, which produces Chimay beer, a dark, high-alcohol brew popular with Trappist ale aficionados in the United States.

The monks from St. Joseph's found themselves more impressed by the lighter, less-potent beers that European monks produced for their own consumption. They call their Spencer Trappist Ale a "refectory ale" that pairs well with the simple food of their mostly vegetarian diet.

After touring breweries packed into centuries-old monastery buildings, they also decided to build a modern, highly automated brewery that requires less manual labor from the abbey's aging monks, the oldest of whom is 99.

The brewery initially aims to produce 124,000 gallons (469,391 liters) of beer in its first year and top out at 310,000 gallons (1.2 million liters) in about five years. Sales to distributors in Massachusetts, Maine and Rhode Island have so far passed expectations, leaving the monks on track to meet their goal of being able to support the monastery and its charities on the brewery's earnings within a decade, said Keeley.

The growth potential has won over many of the monks who at first resisted the idea of brewing, he added.

"Monks don't really like change," Keeley said. "But when we started to run out of options for a revenue source, we started listening." 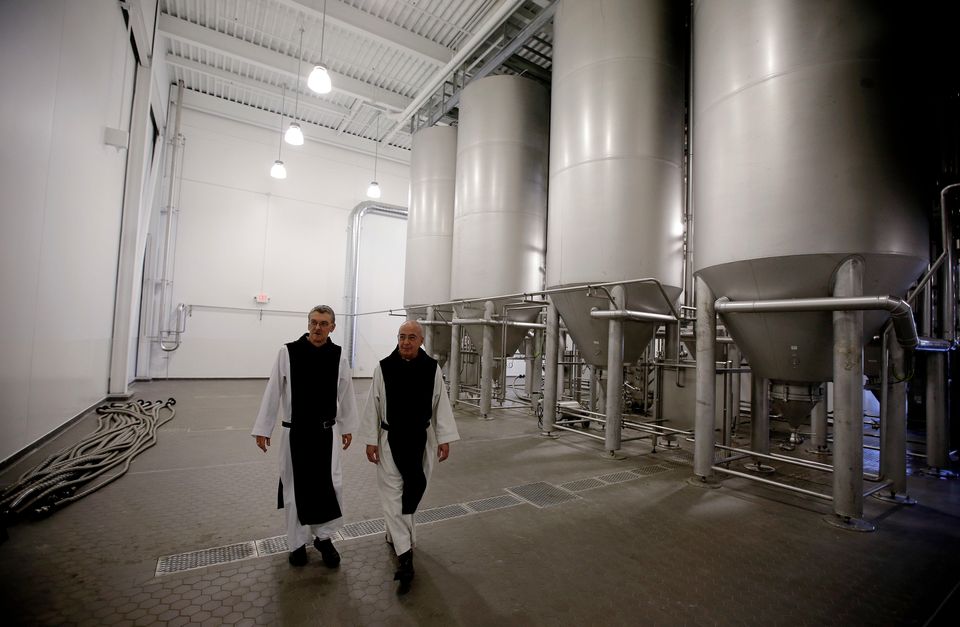