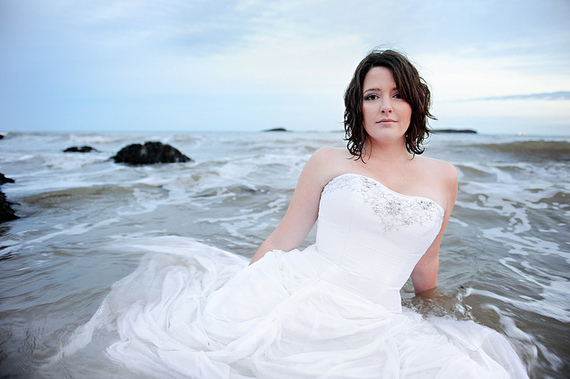 "Trash the dress" photo shoots are a popular trend in bridal photography that is gaining momentum. More and more brides are scheduling the coveted "trash the dress" photo shoot, which involves the bride posing for artistic photos that are more than likely going to destroy her wedding dress. The trashing of the wedding dress is supposed to symbolize the deep and lasting commitment of the marriage and says to the world, I won't need this dress again...ever. To me, it symbolizes an outrageous amount of waste.

A bride, Maria Pantazopoulos of Laval, Quebec, was shooting her "trash the Dress" photo shoot when she found herself in a compromising position. As she was posing for her photos, the 30-year-old didn't anticipate how heavy her waterlogged wedding dress would become in the rushing waters of the Dorwin Falls. Before she could figure out what was happening, the small 100-pound bride was pulled under the water and drowned. The photographer tried to save her but he was no match for the weight of the dress.

To me, this is senseless waste all the way around. I've heard of this trend but I never really "got" it. I mean, if you spend all that time and effort planning your wedding, finding the perfect dress not to mention thousands of dollars spent on the dress, why would you want to trash it?

I think it is wasteful and a slap in the face to the world, especially in a time when so many people are struggling financially. Not to mention how pissed I'd be had I spent a few thousand on a dress for my daughter only to have her destroy it for a photo. You better take your ass to Goodwill and get a cheap one to destroy.

Then you have something like what happened to Mrs. Pantazopoulos. Her whole life was ahead of her. She just started a new journey and like that she is dead because of an unnecessary, stupid and dangerous photography trend. Jumping in large bodies of water in the wedding dress is not the only stunt used to trash the dress. Photographers are throwing paint and even lighting brides on fire for that one of a kind, breathtaking photo. Only how far is too far?

Why put yourself in danger and waste the dress that you could pass down to your daughter and the money spent on it just for a photo? It is foolish and such a wasteful thing to do. This trend feels like the epitome of excess and waste. Have we learned nothing during the down economy? Is the perfect photo really worth sacrificing your life? Because what's the point if you won't be around to enjoy it?

Would you trash your wedding dress just to get a great photo even knowing how dangerous and wasteful it is? Why?