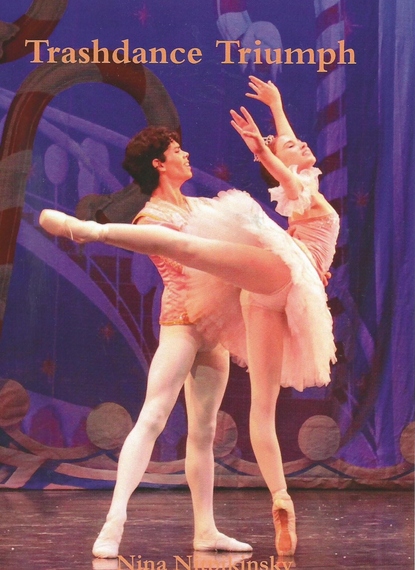 Trashdance Triumph is the sordid yet strangely exhilarating tale of a Russian émigré to America - a former star of the Mariinsky Ballet in St. Petersburg, who commandeers a ballet school in a New England backwater and struggles to adapt to peculiar American ways. Forced to flee his home country after witnessing an organized crime hit, Boris Tukachevsky falls into the arms of a wealthy bird-brained socialite, who promptly becomes pregnant. Her father reluctantly engineers the buyout of a local ballet school to give his new son-in-law something to do.

"Should be read by every parent contemplating enrolling their child in a commercial ballet school!" commands the blurb on the back cover of the book. If those parents know nothing about ballet, this book may scare them away. Which would be a shame. For underneath the mordancy, the clichés, and the outrageous subplots, lie pearls of wisdom. Even savvy parents may learn a thing or two - as Boris does - about the brutal economic imperative facing American ballet schools.

Boris was trained in the rarefied environment of the Vaganova academy, whose rigors are legendary: "Don't lift a leg high enough and you may find a lit cigarette under that leg showing you just how high you really can lift it." But Russians worship their ballet dancers; no one questions the suffering that begets great art, and the state spends lavishly to sustain this pillar of Russian culture.

In America, on the other hand, as one sage parent in the novel concludes, a ballet career is "a form of slow economic suicide." In the fictional Pittsville, Mass., ballet is just another hobby which must compete with tax-subsidized sports.

The central plot illuminates the intricacies and absurdities of casting the annual Nutcracker performances - the cash cow of "Ballet Pitt" and every other ballet school in America. Expertly mined by author Nina Nitpikinsky, it is likely to entertain Nutcracker veterans and virgins alike.

He had to juggle many factors, such as technical skill, class progress, artistic expression, friendships and enmities, car pool arrangements, attendance, sibling enrollments, and parental contributions and economic security to reach casting compromises that would have impressed a U.S. senator maneuvering to get an unpopular bill passed.

The author hides behind a nom de plume - Russian-sounding, in the grand tradition of the drag names of the men of the Ballets Trockadero - because, well, so would you if you took aim at American society with the literary equivalent of an AK-47.

Nothing and no one is spared.

Targets include the American diet (sugary breakfast cereals and barbecue fixings take a particularly rough shelling); the American housewife (who lets herself go to pot once she snags a husband and pops out a few kiddies); the American familiarity of manners (addressing teachers by their first names; oversharing personal information with strangers); the outsourcing of garment manufacturing to China; the promiscuous habits of the American "blue collar slut;" the American male's lackluster sexual prowess; evangelical Christians; the "cheapskate" American Chinese; American HVAC (homes freezing in the summer and overheated in the winter); and American mangling of history ("she lived in French Canada, where, I heard, the women all descend from sluts and trollops that some French king sent over a while back").

Boris' most eloquent putdown is leveled at American crybabies - in this case, a bunch of students and parents who run shrieking from a chipmunk that has wandered into the ballet studio:

Are these the descendants of the people who crossed oceans in small ships, deforested most of the continent, nearly exterminated the Indians and the bison, and wiped out the passenger pigeon? Are they the offspring, however distant, of pioneer mothers who nursed an infant with one hand and killed a rattlesnake with the other?

The novel skates dandily on the border between satire and realism. As Nutcracker season looms, Boris' travails resemble a journey through Dante's Inferno.

He must maneuver to avoid blackmail by a sexpot mother.

He fends off the wrath of a majestic African American woman whose granddaughter he cast as the maid in the Nutcracker ("We gots to march to Selma!" she intones.)

He must break up a catfight between the girlfriends of the Casanova who teaches the adult ballet classes.

He must convince the parents of his prize pupil not to send her to a prestigious ballet competition (where he knows she would surely be poached by a top-notch ballet academy).

And he must think on his feet when he finds a corpse mauled by dogs in a van parked in the school parking lot.

Pittsville's assortment of oddball characters could have sprung from the pages of a Carl Hiaasen novel - though their portrayal lacks the wit and zing of Hiaasen. The nearest we get to a sympathetic character is the gifted French ballet teacher, Ghazianni Morton, whose conscience is in constant spasm as she bends all the principles of good pedagogy to keep paying students and their parents from abandoning ship. The protagonist, Boris, despite his cynicism and misogyny, emerges as a beleaguered hero of sorts.

Nitpikinsky professes to have run her own ballet school in America - after having trained and danced professionally in Europe. She now coaches students privately in London, and claims to have written other, more technical books and articles about ballet. On the evidence of Trashdance Triumph, this seems eminently plausible.

If only Nitpikinsky had nitpicked her prose, Trashdance Triumph would have been an outright satirical gem. Unfortunately, clichés and typos abound, and attempts to reproduce dialect and regional drawl are malapropos. Shifts from flashbacks to the present, and between episodes, are confusing and poorly framed.

Yet the satisfying ending, surprisingly moving and poetic, makes this a worthwhile read. That, and a handful of passages like this one:

Destiny eventually caught up with Eleanor's frantic contest and competition pursuit... [Her daughter] Katje slipped on a stage at the Vermont State Fair, after workers failed to clean off all of the cow manure from the dairy cattle exhibition that had preceded her performance.