Anyone interested in the health of New York City (and the planet) should watch Trashed, a fantastic documentary directed by Candida Brady and produced, presented and narrated by Jeremy Irons.

It's about how trash is poisoning our oceans, our air, our land, our cities, and, of course, us.

It explores the whole trash process from before something is trash all the way through to how we try to get rid of it. It then explains the health consequences of each method. It finishes by looking at how it should be done, using San Francisco as an example.

San Francisco recycles close to 75 percent of its waste and is aiming for 100 percent. In New York City we recycle somewhere between 11 percent to 18 percent depending on the borough. Manhattan does best, Brooklyn and the Bronx do worst. Staten Island falls in the middle, but I guess they've done enough recycling already...

Interviewing top scientists and experts, Irons shows how landfills and waste-to-energy sites (incinerators) can damage the environment and harm people. There's a particularly harrowing section about Dioxin, a by-product of incineration.

Dioxin builds up in the fat of the body. Men have a hard time getting rid of it and it takes many years, perhaps a lifetime. Women are "luckier." When they get pregnant, the fetus leeches out some of the Dioxin along with other "nutrients." The resulting deformities have to be seen to be believed.

The documentary was produced in England, but travels all over the world. When it gets to America, one waste disposal company is featured as having a particularly bad record. Covanta.

Covanta, according to the documentary, has been fined and/or forced to settle for large sums of money with Massachusetts and Connecticut for violations involving excessive Dioxin releases. These are only a few of the many environmental problems Covanta has had over the years.

Within the last few weeks, New York signed a 20-year contract with Covanta to handle a large proportion of New York City trash. Covanta CEO Anthony Orlando values the contract at about 2.8 billion dollars over its 20-year life.

City Hall not only signed this absurdly long contract (views on garbage disposal are changing rapidly), but also decided it was okay for Covanta to pick up many tons of garbage a day from a site located 50 feet from an athletic field used by 31,000 New York city kids from all boroughs.

A scientist in Trashed explains that harm done to a child when she is young is irreversible and continues to affect development all the way through to adulthood, triggering new and different problems or abnormalities along the way. Some of these may be passed on to the victim's children. In the case of Dioxin, for example, it's thought it could take six generations to "breed out" genetic damage.

Dioxin will not be a big factor at the garbage transfer site near the athletic field, but other toxic material will, including radioactive material. The 91st Street Marine Transfer Station is in an area (Yorkville/East Harlem) where there are many hospitals. (It's also in the worst kind of flood zone, in the most polluted district in the city, and less than two hundred feet from a thousand public housing units.) The city acknowledges radioactive waste will end up here and a radiation monitor is to be installed at the site -- but too late for it to help the kids.

Several hundred trucks a day will converge on the athletic field, and then drive alongside it exactly eleven feet from where the children play. The photo below shows the ramp running alongside the field. Where the ramp ends will be the entrance to the garbage site. It will extend two acres into the river and be ten stories high. 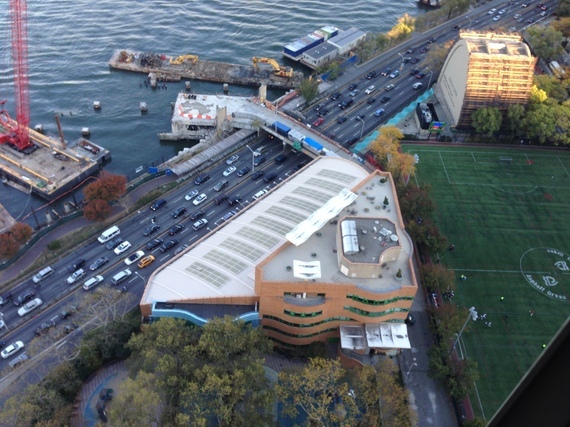 No garbage site in New York has ever been this close to a children's play area or to public housing.

When I was a child I used to play with asbestos in my father's factory. He made temperature control devices for laboratories and asbestos was a great insulator. Nobody knew it was bad for you.

It is impossible to know what will be found to be toxic in the future, what new toxic materials we'll generate, what size the particles will be if they get broken down, nor how easily they'll blow off the trucks.

It is not impossible to know -- in fact every person with a heart knows -- that children are the most vulnerable members of our society and the last ones whose lives should be put at risk, gambled with, least of all when it's all just for political gain. See my article, "Bloomberg's Last Dump."

Many years ago in England I worked on a documentary about the drug thalidomide and met the children born with truncated flippers instead of limbs. I also met some of the executives of the drug company that continued selling it long after it should have. I hope the city changes its mind and decides not to risk similar results, similar suffering, similar shame.

This garbage site is part of a plan that has largely failed and is already out of date. It is both arrogant and timid. In the particular case of the 91st Street Marine Transfer Station, it's an arrogant Bloomberg imposition on a residential neighborhood. In a wider sense it encourages exactly the kind of profligacy we're too timid to fight through serious recycling.

If in ten years time we're still shuttling garbage around in barges and trains then burning or burying it instead of recycling it, we won't be a "progressive" city, we'll be an international embarrassment. If you live in New York, ask your representative if he or she really supports squandering city money on 20 year contracts for 20th century solutions when far better solutions exist in far cleaner cities. (Cleaner in all senses.)

But don't listen to me -- watch Trashed. I challenge any decent human being to see it from start to finish and still think that garbage should be fooled around with in such close proximity to children.