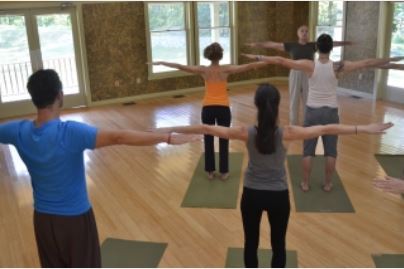 Omega: How do you define trauma?

Hala: Trauma is anything that overwhelms our capacity to cope and respond, and leaves us feeling helpless, hopeless, and out of control. Trauma is a continuum, and this general definition includes what we call "big T" traumas and "little t" traumas.

Big T traumas are the things we typically think are traumatic, like abuse, violence, a car accident, natural disasters, war, or witnessing violence. Trauma can also be divorce, immigration, and even other overwhelming things we don't typically think about. A little t event might not seem traumatic from the outside but can overwhelm someone, especially a child.

I often joke that I have hair trauma because I grew up with really curly, frizzy hair in Miami, Florida. When you're 13, a bad hair day is overwhelming because for adolescents, social acceptance is an important part of that developmental stage. Even though I would never compare that to someone who was abused, it's an experience that shaped my identity and, at the time, was intolerable--it made me feel isolated and depressed. To an adult, a bad hair day may not be a big deal, but for an adolescent looking for acceptance from her peers, it's a lot.

Omega: What makes yoga such a powerful practice for working with trauma?

Hala: The yogic practice of finding presence with our sensations is the key to learning to self-regulate, which is the goal of dealing with trauma. We define self-regulation as being able to be grounded, centered, and in present time. Our body is our GPS system, and in order to let it guide us in the proper way, we have to be willing to feel it and not just try to manage it. We have to be able to tolerate uncomfortable sensations and know that we can move through them.

Omega: How did you start working with trauma, and how has it changed your teaching?

Hala: I had been teaching yoga for a long time when I got a master's degree in counseling psychology. Right out of graduate school I did a training in a technique called Somatic Experiencing®, which is a body-based therapy that addresses how trauma lives in the body, and it changed everything for me. The trauma framework gave me a language for why the yoga works. Before that I knew yoga worked, but I couldn't explain why, other than in esoteric terms.

When I realized most of us have some sort of trauma or stress, I wanted to make sure I was teaching in a trauma-informed way. So whether I'm working with somebody with PTSD, or somebody with regular anxiety, the language of connecting to sensation in a compassionate and safe way is important in order to self-regulate. All my yoga became trauma-informed after training in Somatic Experiencing.

Omega: Are different trauma-informed approaches needed for different traumas, ages, or genders, or are there principles that can be applied across trauma-affected populations?

Hala: I often say that what's medicine to one person can be poison to another. There is not one way to deal with trauma symptoms. One person might become anxious and hypervigilant. That person is ready to fight and can get stuck on "on." And then there are people who get stuck on "off." They tend to get depressed, dissociated, tired, or act spacey.

These two physiologies look really different--one person who has so much energy in their body they can't manage it, and one who's not in their body, and is off floating on cloud nine. But beneath both of those physiologies is a nervous system that can't handle all the energy it has to manage. Some people look like they're full of energy, and some people disassociate.

I liken it to electric wires in a building--if there's a surge, either there's a big explosion or the surge protectors shut everything off. A trauma-informed approach does its best to include these two very different ways people relate to their traumas.

Omega: Can you share a story that particularly moved you where you saw trauma-informed yoga change someone's life?

Hala: I gave a short talk once as part of a prison program, and a year later I got a letter from someone who had been at that talk. He was a Vietnam vet who had been incarcerated for many years and felt a lot of shame that his body trembled and he would rage and feel out of control. He had supposedly been in trauma therapy and was heavily medicated.

He told me that he never realized or understood that what he had was trauma. He connected his behavior to his childhood experience of his father taking him out in the woods where he would beat him if he didn't kill animals. He started meditating and doing mindfulness practice after my talk, and a year later was off his meds. It's not like my session healed him, but it gave him a framework and opened him up to what he needed to do to heal.

There is also a story from when I was doing this work with a group of gang interventionists. This was a group of former gang members who worked in their community, in the places of their original traumas. One man had been shot on a particular street corner, and whenever he would near that corner he would start to tremble and he couldn't breathe. When I explained to him what was happening, he was so relieved. He said, "Oh my God, Hala, I thought I was crazy."

Explore more in the category of Body, Mind & Spirit.

More:
anxietyresilienceinterviewGPS For The Soulyoga-therapy
Newsletter Sign Up
An essential daily guide to achieving the good life
Subscribe to our lifestyle email.
Successfully Subscribed!
Realness delivered to your inbox