Years ago, while in Bosnia, I asked a refugee how the war had changed him. The young man answered immediately: "I will never see a war film again. The lies! A war film is all lies. A war is nothing like what you see on screen. In the movies, it's all exciting and manly, honorable. War is nothing like that!"

Laurent Bécue-Renard's documentary "Of Men and War," which screened this past weekend at the Istanbul Film Festival, testifies to the grislier "truth" of war. It showcases the lasting horrific effect of combat on both those who serve and their families. Bécue-Renard, a French filmmaker, devoted five years to filming American vets who have returned from combat in Iraq: he spent one year living side-by-side with these soldiers in the California psychiatric residence (Pathway Home) where these men, in anguish, went to receive treatment for their post traumatic stress disorder; then four years filming the men in their family homes as they try to reintegrate with their families. All fourteen vets show astonishingly similar symptoms of trauma. They twitch, scratch tables, explode with anger, periodically lay their head on the table, and press their hands over their ears. When surrounded by loved ones--wives, girlfriends, children--they seem alienated and angry. The wives look over helpless. Several threaten divorce. "Thanks for putting up with me" is a constant refrain.

The director is invisible in this documentary. There are no interviews, no overt narrative structure. Basically, the film is 2 hours and 20 minutes of footage taken from the vets' group therapy sessions, interspersed with clips of the men with their families, in no particular chronological order. The only sense of time comes from institutional celebrations of standard American holidays: Christmas and Thanksgiving, with frosted cake.

What results is that we are completely intimate with these men, in their tortured heads as they recount their war stories to the therapy group. One man tells what it feels like to put his friend in a body bag, crack out the "rigor mortis", and realize his friend is "gone forever." Another chokes with vomit as he describes the corpses of fellow soldiers he had to disentangle like a "pile of rope", pulling the arms from the legs. All the men vouch agreement--"yeah that's right man!'-- with one vet's angry statement that the "closing eye" trick is a myth. "In truth, it is really difficult to shut a dead man's eyes!" The man explains how the brain of a man he had shot ("his target") "spilled out on his boot" and how he then tried to shut the dead man's eyes. "I mean, the one eye that remained," he qualifies. "But that eye would not shut! It kept staring at me! It would not stop staring!"

It continues to stare at him in his sleep.

What is remarkable in this film is that we learn that no death is anonymous, whether of a fellow soldier or an enemy. Each and every person killed remains embedded in the men's unconscious.

Challenging another myth of war: we learn how absurdly messy and inexact war is, full of blunders. One man inadvertently shot his buddy in the head while idling with his gun in the living room. "He gave me a 'what the fuck' look and died." Another tells of the "collateral damage" of a little girl he killed, by inadvertently swinging a door against her and cracking her spine.

The men--telling these stories--contradict yet another myth: the myth of the stiff upper lip and masculine self-control. They weep and often have to leave the room.

"Are all soldiers this traumatized by war?" I asked the director after the screening. "Or are these men in your film particularly sensitive?" I explained to him that I had once conversed with a US Air Force pilot stationed in Afghanistan, who smiled as she told me how she listened to the screams on her walkie-talkie coming from the ground, of terrified people fleeing: the result of the bombs she just dropped. "Isn't that difficult to listen to?" I had asked the young woman. "No," she said beaming. She was proud of her actions "against the bad guy." She was not traumatized.

"Yes she was," the director said, absolutely sure of himself. "She will realize the trauma later. Anyone who serves in war is traumatized. It is impossible not to be."

The therapy given to the vets does help to some extent, even though the meditation/relaxation sessions we see throughout the film seem almost ludicrous given the enormity of the experiences recounted. "Close your eyes and rid yourself of all thoughts," a woman's voice says soothingly. "Do not attach to the emotion." But these men are permanently attached to the emotion of war: the panic for survival, the constant death. They cannot get rid of the thoughts. As the director opined to me after the screening: "The trauma of war will always be with them. The battle continues inside." 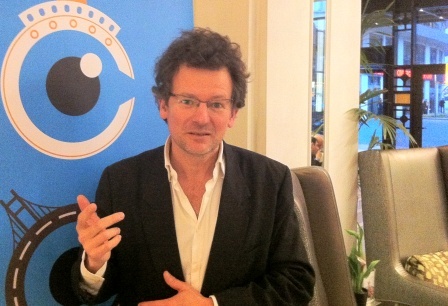 Particularly impressive in this film is the modest director's tremendous investment. Before Laurent started shooting, he spent three years doing research on war veterans, so he could "gain legitimacy" with the men. Then, before he even picked up a camera, he spent five months accompanying the men in their daily therapy sessions, to gain their trust. His obsession to record the veterans' stories is motivated by a personal reason. Both of Laurent's grandfathers were veterans of World War I. "These are the stories my grandfathers would have told me, if they could," he said. "These are the stories every vet would tell, if he or she could express it."

As the grandson of veterans, Bécue-Renard's view is wider than just looking at PTSD symptoms in individual men. He is interested in societal trauma: how war has a trickle down effect on the children of veterans, and indirectly, on the children's children and so on. "We are all damaged by war," the director said. "Everywhere. Even where there is no war at the moment. The world is a traumatized place. We all have ancestors who experienced war and passed their experience down to us."

The film exposes this generational transmission of trauma in the making. We observe the small children of these vets playing in their homes. One little girl, apparently beaten by her angry father (who cannot control his PTSD rages) begins to swat other children in school. Another tiny blonde elfin girl cannot understand why her uptight father is so distant, glaring into the horizon, his eyes glazing. The camera focuses on these innocent children, who are unaware that they are getting the brunt of combat and carnage.

Indeed, the last image of the film is a shot of a little girl on her father's shoulders as he strolls in a forest. "Are there werewolves here?" the childish voice pipes up. "Will you protect me?" The "werewolf", the director explained to me, as we taxied together in Istanbul, is the father himself: the darkness that lurks--and the girl now fears.

Yet the documentary gives hope: and this hope consists in the film itself. The reason the men (and wives) were so willing to be filmed, the director explained, is because the camera acts as a witness: a third eye. And as many trauma scholars have shown, witnessing is a central component to healing. The trauma victim needs his or her pain to be acknowledged, to be heard and seen, in order to reintegrate into the community.

"A documentary is a guarantee that there will be a story," the director continued. "The men need a story because their own lives are chaotic. When the completed film screened to them, they were able to see their own journey, how far they had come, and saw that their story can have a meaning for someone else. Hence they feel more grounded."

Ironically, it is the very fact that these stories are so difficult for people to listen to--to acknowledge the existence of --that makes war trauma so indelibly haunting, unable to be exorcised. Most people probably do not want to hear war veterans speak about the horrors they have seen, let alone go spend an evening watching Of Men and War: Which is why it is all the more important to see it.

"The film is a way to validate these soldiers' trauma," the director stated. "Today Of Men and War is being shown in Istanbul; next week in Los Angeles. Viewers from all over the world will see it. In this way, these men--who are so cut-off--are building new bonds and new community with mankind."