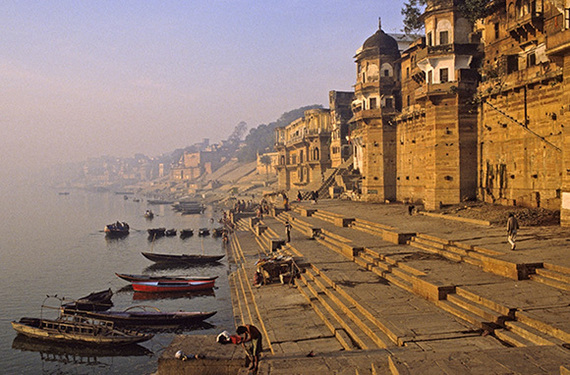 The world's oldest cities are once-in-a-lifetime destinations, places that effortlessly inspire awe and put you in the shoes of a time traveler. To walk labyrinthine streets, marvel at crumbling fortress walls, or see kings' tombs that have endured thousands of years is to experience a fleeting moment of what life was like for the first civilizations on Earth. Read on to be transported to 10 ancient cities (without travel advisories) where you can take part in age-old rituals and learn about the legends that have been passed down for more generations than you can ever fathom.

Hundreds of prehistoric burial grounds are scattered in and around Amesbury, and Stonehenge, just two miles away, sits in the middle of them. Archaeological evidence suggests that Amesbury's first inhabitants--who settled in England's River Avon valley at the site of what has historically been an important river crossing--predate even Stonehenge. Amesbury, the home of Stonehenge, is also linked with the legend of King Arthur. As the story goes, Guinevere came to the convent here after leaving Arthur, and she is buried on the grounds of the former abbey.

What to See: At Stonehenge's new visitor center, check out artifacts unearthed from burial sites and tour an outdoor cluster of recreated Neolithic houses from the period. Walk around the Stonehenge circle, listening to the audio tour on headphones to learn about the site's mysteries and why it may have been located here. The Amesbury Museum and Heritage Centre displays huge quantities of handcrafted flint tools that predate Stonehenge by more than 5,000 years.

Think of ancient Athens and likely the first image that comes to mind is the Parthenon, the 5th century BCE temple dedicated to the goddess Athena. But archaeologists say this Acropolis site on the rocky bluff was inhabited thousands of years before the Parthenon existed and thousands of years before Plato, Socrates, and Aristotle walked the city streets. The ancient home of philosophy and birthplace of Western civilization, Athens also has bragging rights as the first host city of the modern Olympic Games.

What to See: Climb up to the Acropolis on a walking tour. See displays of striking classical sculptures and watch curators restore similar marble statues with laser technology at the Acropolis Museum. Along the historic Plaka neighborhood's narrow, labyrinthine streets, you'll find neoclassical mansions, ancient monuments, and scores of churches. Run on the Olympic track and get your photo taken on the winner's podium at the Panathenaic Stadium.

About 60 miles southwest of Cairo, Fayoum is part of Egypt's largest oasis, where the pharaohs built pleasure palaces and the Greeks built temples paying homage to the Lake Moeris (Lake Qaroun) crocodiles they believed were sacred. Fayoum, called Crocodilopolis by the Greeks, became the most significant center for the cult of Sobek, the crocodile god. Ruins of two temples dedicated to Sobek still stand today. The modern city is home to large bazaars, mosques, and baths.

What to See: Don't miss Madinat Madi, the largest surviving temple of the intermediate period of the Pharaonic era. At the three-floor Qaroun Palace, you'll see a king's throne, wall drawings, and inscriptions that date to 323 BCE. The Hawwara and Al-Lahun pyramids are nearby. Other interesting archaeological sites include the Whale Valley fossil area, an open museum with whale skeletons, shark teeth, and petrified shells and corals.

In south-central Bulgaria, near the border of both Greece and Turkey, is the beautiful "City of Seven Hills," originally a Thracian city before it changed hands under the rule of the Greeks, Romans, and Russians. Today, you can still see the influences those cultures left behind in Plovdiv's cobblestone streets, fortress walls, Roman amphitheater and aqueduct, and Ottoman baths. High on the naturally fortified northern hill of the three-hill massif Nebet Tepe is the site of the original prehistoric settlement.

What to See: Walk through the archaeological complex at Nebet Tepe and Old Town's museums and galleries. Go to a performance in the Ancient Theatre, a restored first-century open-air venue made of marble that was originally used for theatrical performances and gladiators' and hunting games. Nearby in the Roman Stadium, athletic contests were held in 2 CE. The city was named the European Capital of Culture 2019.

Previously known as Antioch and as Antep, the city of Gaziantep lies where the Mediterranean meets Mesopotamia, an area considered the center of the first civilizations. In 300 BCE, Alexander the Great's generals founded Zeugma (now part of Gaziantep) before it was conquered and ruled by the Roman Empire as an important outpost on the Silk Road to China. Several ancient sites remain in Gaziantep and 13 different museums house impressive collections of artifacts.

What to See: Check out the remains of baths and cisterns in the Ravanda citadel, restored by the Byzantines in the sixth century. Nearby are several 15th-century mosques and caravanserais, which once provided lodging, food and refuge to passing caravans. The Zeugma Mosaic Museum, one of the world's largest mosaic museums, displays massive pieces dating from the first century BCE. Shop for baklava and yemeni (shoes made from local leather) at the city's two well-known bazaars.

What to See: Visit the Valley of the Kings and the Valley of the Queens, the West Bank's grand-scale tombs. Find hundreds of relics in the Luxor Museum, overlooking the Nile River. The Avenue of Sphinxes connecting the Karnak Temple and Luxor Temple is lined with 1,350 sphinx statues. Visit the temples at night for a completely different experience.

This beloved city and holy place of the three monotheistic religions was long considered the center of the world. Ancient maps show Jerusalem at the middle of the three continents known at the time: Europe, Asia, and Africa. Set high in the Jerusalem Hills, this is the place where the Jews built the temple, where Jesus was crucified, and where Muhammad rose to heaven. The Old City's narrow streets lead you past towering stone walls and ancient buildings that have survived centuries of destruction and resurrection.

What to See: At the base of the massive Western Wall, Judaism's holiest site, write a prayer or wish and wedge it into the cracks. Follow the Via Dolorosa, the road Jesus walked that leads from the courthouse site where he was sentenced to Golgotha Hill where he was killed. Other must-see sites are the Church of the Holy Sepulcher, the Temple Mount, Mount of Olives, Garden of Gethsemane, and Yad Vashem.

Asia's oldest continuously inhabited city, Luoyang was considered to be the geographical center and one of the four great ancient capitals of China. It lies on the north or sunny (yang) side of the Luo River where it converges with the Yi River. Stunning mountains surround the city, where Chinese Buddhist temples and monuments are carved into the sides of hills. As a capital of several dynasties, Luoyang has become a city renowned for its culture and recognized by UNESCO for its heritage sites.

What to See: At the Longmen Grottoes, there are 2,345 niches for Buddha, 100,000 statues, and 2,800 calligraphic inscriptions. Be prepared to climb several hillside steps to see the most majestic of statues. Take a bus just outside of town for a visit to the first Buddhist temple in China: White Horse Temple, a small and uncommercialized temple with many monks.

Inhabited Since: Around 2000 BCE

Just north of Turkey, at the crossroads where Europe meets Asia, is Kutaisi, Georgia, the former capital of the country and the land of the Golden Fleece. While this city, originally part of the Colchis kingdom, dates to ancient times, it is perhaps best known for its place in Greek mythology. According to the epic Greek poem, Jason and his Argonauts were said to have traveled to Kutaisi to find the Golden Fleece. The city's magnificent Renaissance heritage sites from the 10th to 12th centuries are well preserved and offer terrific views overlooking the city, the surrounding mountain ranges, and the Rioni River.

What to See: The Bagrati Cathedral and Gelati Monastery are both UNESCO World Heritage sites. The monastery, where the most celebrated king of Georgia is buried, is known for its mosaics and frescoes. Not far from the city are two caves, one with dinosaur footprints and the other offering boat trips on an underground river.

India's oldest city, Varanasi is also one of the holiest city in the world. The god Shiva is believed to have lived in the area and a major shrine here honors this lord of the universe. Pilgrims travel from as far away as 1,250 miles to visit the shrine and bathe in the city's sacred Ganges River. Every day, thousands of locals and pilgrims immerse themselves or come to die in these waters that are said to have absolved the sins of many generations. Along the water's edge, ghats (riverfront steps) associated with Hindu mythology are sacred sites for yoga, cremation, or meditation and worship with prayer and fire.

What to See: Don't miss Varanasi's various temples and ghats. The Vishwanath Temple, dedicated to Shiva, is closed to non-Hindus but others can recognize it by its golden spire. Visit an excavated site in the Sarnath area of town and see a large collection of Buddhist sculptures in the Sarnath Museum.

Read the original story: Travel Back in Time to These Amazing Ancient Cities by Jamie Moore, who is a regular contributor to SmarterTravel.