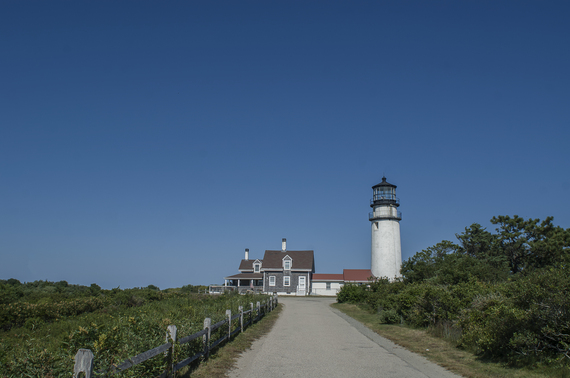 I have brought my eight-year-old daughter to Cape Cod in the hope of introducing her to a place I loved as a child. While the sea continues to eat away at its beaches and locals bemoan development pressures, the soul of Cape Cod remains very much the same as it has for hundreds of years.

There is one main road that traverses the whole of the Cape, Route 6, which, for much of the journey to Provincetown, whittles down to two lanes and provides a scenic drive past classic shingled cottages and boxy 18th century meeting houses.

A great place to start exploring is in Hyannis, home of the famed "Kennedy Compound." The John F. Kennedy Museum, just steps from the port, which ferries boats from the harbor to Martha's Vineyard and Nantucket, celebrates the best of the Kennedys through photographs and ephemera.

Many visitors base themselves in Hyannis at the locally owned Cape Codder, a large hotel that has a mini indoor water park and sprawling apartment-style suites outfitted with marble baths and designer kitchens that makes it an attractive base for young families.

Cape Cod, since the earliest native people settled here, has been focused on fishing. Today, many trawlers still push off from the ports. Until the early 20th century, whalers were plentiful. In fact, many of the towns that anchor the Cape were in large part built around whale wealth. Whaling, of course, has long been banned, but whale-watching boat tours run from April through November.

To fully understand the beauty and culture of Cape Cod, you must understand the National Seashore, since its scope includes beaches and dunes, forests and pastures, historic homes and lighthouses, ponds and marshes and six thriving towns: Provincetown, Truro, Wellfleet, Eastham, Orleans and Chatham.

My daughter and I start our exploration of the National Seashore at the Salt Pond Visitor's Center, where there are exhibits on geography, topography and anthropology of the area, and which also happens to provide one of the best views in all the Cape. The lobby offers wide windows that frame a picture perfect view of a quintessential New England cove.

The Cape's beaches with white sand, sea grass-tufted dunes, steep cliffs and the dramatic ocean surf are home to plovers and sandpipers, who bounce along the waterline. The beaches are not for the faint-hearted. Blustery winds bear down on the Cape, even in the mildest of months.

Temperamental waves dance at shore. There's a forceful undertow. And sharks -- Great Whites and others -- cruise the coastline.

Beyond the beach, the oceanfront is also home to some of the country's most historic buildings -- and I'm not only talking about the iconic lighthouses.

On a wind-swept stretch of beach tucked amid the swelling dunes near Provincetown, there is a cluster of 19 structures without running water or electricity known as the Dune Shacks. Originally, simple family beach huts and artists refuges, they've grown to symbolize the independent spirit of Cape Cod-ers. Today, families, artists and arts foundations occupy these austere shingle-clad dwellings.

Iconic New England lighthouses stud the coastline, along with historic Coast Guard stations. And one structure visitors can only find here is the Marconi Wireless Station, the remains of which are located on a bluff overlooking the Atlantic Ocean. It was here in 1903 the very first transatlantic message was transmitted between President Teddy Roosevelt and King Edward VII of England.

Although the ocean has absconded with most of the original station, we climbed to a new platform for a 360-degree vista of the Cape. Although we visited in daylight, a local told us that there is no better place for viewing night sky because there is no light pollution.

The National Seashore also includes inland turf. There are 12 self-guided trails that will put you in contact with a landscape unique to this skinny stretch of land that is bounded on one side by the ferocious Atlantic and on the other, the calmer, but still violent temperament of Cape Cod Bay.

Rough gales from the sea batter plants, stunting their growth, and salt-laced winds tame foliage. The few survivors are hardy, durable plants that are all the more appreciated for their fortitude.

Forests here are low and crouching, subdued by the pounding of the briny wind and sandy soil. As my daughter and I hiked along one of the rustic trails, we marveled at the diversity. Trees, like maples and white cedar that thrive in wet soil, were plentiful. The forests are laced with the inevitable fingers of water that tickle the interior spine of the Cape. Snapping turtles, coyotes, foxes prowl the wilds.

The charming town of Chatham is located about halfway up Cape Cod and makes an ideal base for exploring. My daughter and I holed up at one of the East Coast's most perfectly executed perches: Wequassett Resort. An intimate and elegant resort that hugs a pristine cove, it delivers the essence of understated Yankee good taste. And, unlike many upscale hotels, this one is truly family friendly with a little beach, outdoor pools and even a Cape Cod-centric kids club that offers sailing lessons.

Wequassett is also home to what's widely considered the best restaurant on Cape Cod, Twenty Eight Atlantic. Locally-inspired dishes like risotto flecked with littleneck clams, oysters plucked from the bay paired with a cucumber granita, and local cod served with white bean puree are served in a handsome waterfront dining room and, in good weather, outside on a sweeping deck overlooking the waterfront.

The Cape concludes in a fist that thrusts into the bay where the lively, funky town of Provincetown draws visitors looking for good food, candy shops, galleries, theater, music and history. Contrary to popular belief, Plymouth was not the Mayflower's first landing spot. This was. Gear up for a 252-foot climb up Pilgrim Tower, the 100-year-old granite monument, that stands like a beacon at the very top of Provincetown. It offers a panorama of the city, the ocean and the scorpion-tailed tip of Cape Cod. Here, the land peters out to the faintest dusting of sand, reminding you of the Cape's fragility.