What happens when you travel to your Labor Day adventure destination, and you discover that it's no longer there? How does something like that even happen?

I stumbled upon this story entirely by accident, on my day off (even typing those words as a travel writer makes me feel like an oxymoron). Driving from a shoot at Mt. Whitney to the opposite side of Sequoia National Park, I chose the scenic route which passes adjacent to Lake Isabella, one of California's largest recreational reservoirs.

This is Lake Isabella:

Lake Isabella wasn't my destination, it was simply a California landmark I'd never seen. Thinking it would be a picturesque Labor Day weekend destination, I decided to drive around it on my way to the National Park. Without knowing anything about the lake, seeing it only from Google's directions, I was anxious to take some photos. 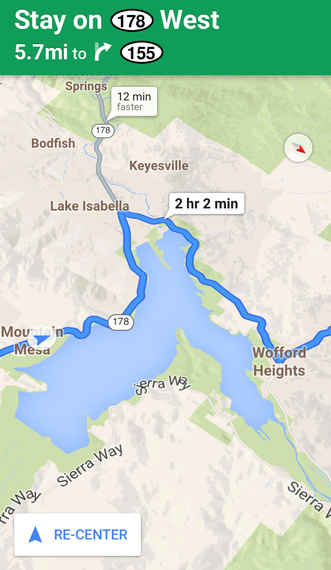 My first stop, just ahead of the arrow in the above map, was Paradise Cove:

I drove up to the end of the boat launch for the lake.

The answer isn't as cut and dry as a person might hope for. Locals and visitors can easily blame the California mega-drought, water over-usage, faults in the dam, the deity of your choice, and/or climate change. An over-simplistic, but oddly encompassing, explanation that I'll use to serve as the basis for this discussion of our changing world, and it's effects on how we travel, goes like this: 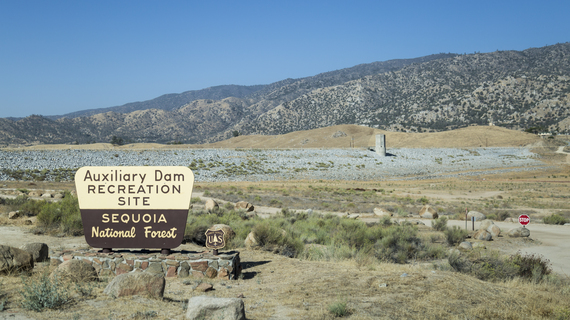 When I say Mother Nature (for the geekier among us), I'm referring to the biology, chemistry, and physics which govern our planet's natural state. Mother Nature doesn't care if you planned a Labor Day vacation to Lake Isabella, but thousands of other people (mostly locals) very much do.

The arguments for or against actions to, at the very least, adjust our society, to the ramifications of the changing climate often revolve within a universe of economics. Think about the financial impact of the image above. A completely deserted, unkept recreation area on the last great vacation weekend of the summer, doesn't inspire economic excitement. 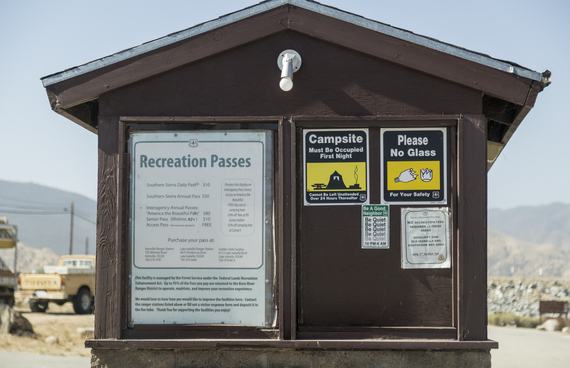 It's not simply a far away government agency that suffers when a lake dries up. Think about the tours, rental agencies, and recreational sporting facilities -- boat docks, restaurants, and hotels -- transportation, real estate, and social services -- all the local towns -- basically everyone. 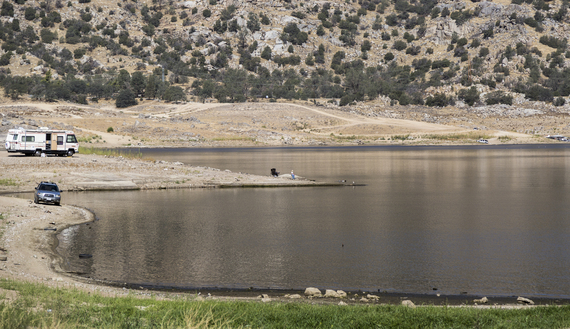 Folks who want to go fishing have a shrinking set of opportunities. This image was taken standing inside where the lake used to be. 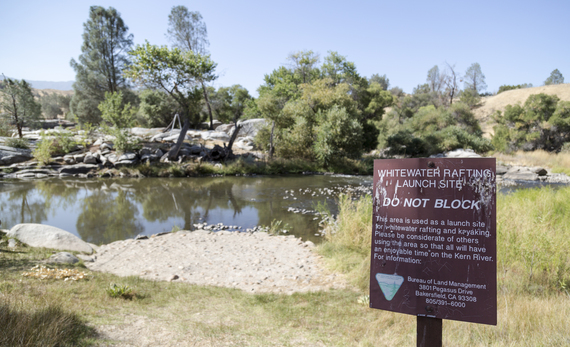 The 2015 Kern River rafting season was canceled this year. There were no rapids. 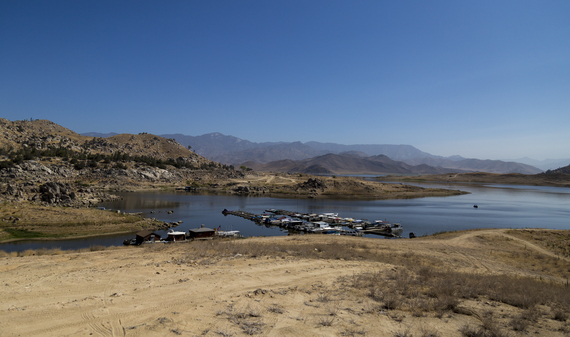 The boat dock (for the boats that are left) continuously has to move its position to keep the remaining boats from being unintentionally dry-docked. 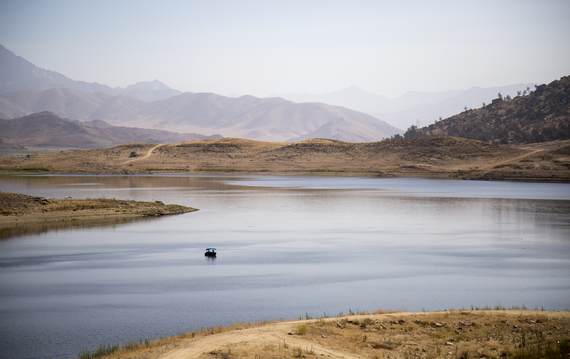 A single boat sits in the last remaining navigable portion of the lake.

Lake Isabella was created by the Army Corps of Engineers in 1953 through the damming of the Kern River to create a reservoir of 11,000 acres. The local businesses that thrived from the lake's potential set up shop under the rules of a 20th century climate. Manmade lakes have been created from careful calculations based on years of study; the predictable nature of Mother Nature. If the local enviornment isn't conducive to a large infrastructure project, the project doesn't happen (imagine damming the creek in your backyard to make your own reservoir). It seems simple enough, but it's all based on an underlying supposition: the cycles of the natural world won't change. The world won't change.

If the same dam project were to be commissioned today, it may very well have been rejected as non-viable. 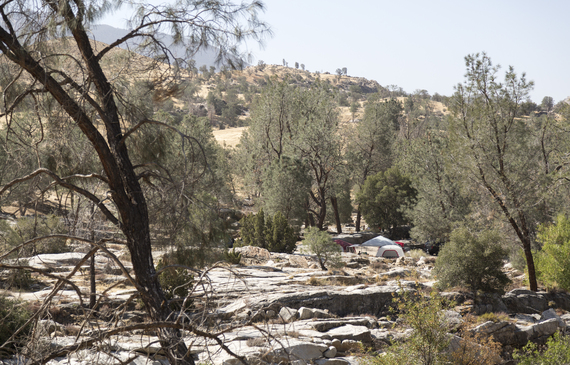 So what happens if the natural world does start changing? How can someone plan a vacation based on information of the past if that information is no longer accurate? 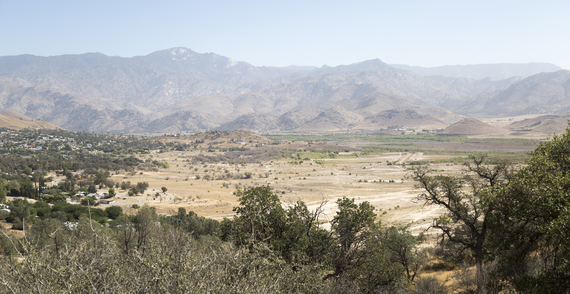 As with all things the first step to solving a problem is admitting that we have one. Societally, we need to begin the adjustment process to what the world is going to become as Mother Nature redistributes solar energy around the entire planet. We, as a species, dug up gigatons of carbon (that had been physically separated from the planet's carbon cycle for millions of years), and burned it into the atmosphere. The Earth is now readjusting itself, and the flow of solar energy absorbed each day, to compensate for this change -- to reach a new equilibrium. Everything will be affected, because everything is connected. 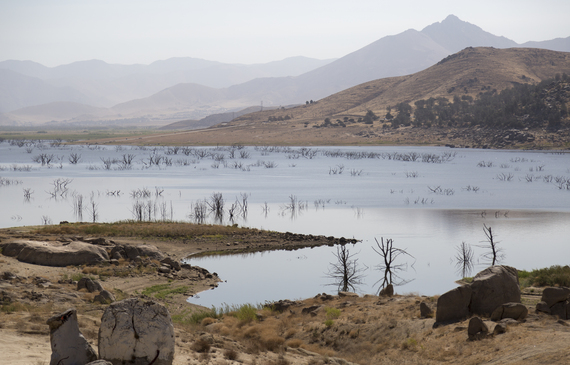 Once you admit that the world isn't the same place it used to be, you can plan your future trips with more accurate forethought (including having a realistic empathy for the businesses that have suffered through these changes). Think about how weather patterns may have changed, and how travel "seasons" may not be the specific months they used to be. Don't assume the charts and graphs in older travel books will be accurate. Always e-mail outdoor activity businesses to ask pertinent questions about the local conditions, and how they may have changed. The more you learn about your destination before you set out, the more likely you'll be to understand how changes in their local climate may have affected the experiences there. Try to find a fun excuse to patronize a business that may be suffering; be creative.

Don't be afraid to adapt!

We are all going to be forced to do so. Let's try to enjoy it the best we can.

Photographs were taken by Kevin Richberg on the shores of Lake Isabella, California, on Friday September 4th, the start of Labor Day Weekend, 2015.