After nine days in Morocco, it's been interesting seeing a different part of the world, especially after three weeks meeting with producers in familiar spots in Europe. I adore Paris and spending time in Germany, but I looked forward to my research trip in Casablanca and Marrakech, and popping in on my French cousin Daniel in the coastal city of Agadir.

Morocco is a helluva lot different from what I'm used to seeing, not having been in a Muslim country since Istanbul in 1998. It was intriguing to note the hawkers and their myriad selection of goods spread on blankets all over the sidewalks. Plus, the parade of locals in a variety of attire, from western jeans to women in burkas, which covered everything but their eyes. 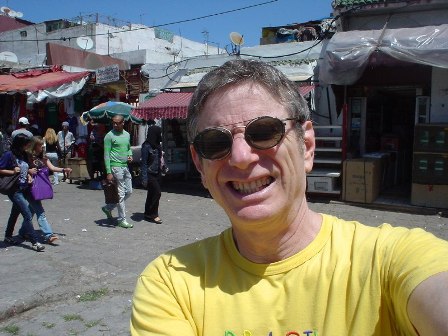 I visited as many places as I could, but what I couldn't appreciate or ever get used to was the ubiquitous presence and acceptance of beggars as a part of everyday life.

I understand begging isn't exclusive to Morocco, and please understand I realize that misfortune makes people do the unthinkable. I've witnessed the practice in India, Brazil, Egypt, Thailand and even Los Angeles. When I'm in Paris, considering the number of subway lines in their Metro system, it seems that there's just about always someone in the car I'm riding in, though most purport to be entertaining us as a captive audience before accosting us with pleas for financial support.

None of this makes it right, nor should we have to stand for it, or in some way consider it a fascinating part of travel, as in the comment of one person, who said "That's Morocco."

I don't care if it's Morocco or India or someone with their hand out in Beverly Hills. If I'm walking around or sitting in a café or lying on the beach I don't want to tense up as I see someone approach in my peripheral vision. I don't think it's someone's right to continually try to get my attention, whether with a pseudo hello and, when you don't respond, ten or twenty follow-ups to force me to deal with them.

I had a man following me in Casablanca, and I zigzagged around cars trying to get rid of him, only to be saved by a cab driver who stepped in and told the guy to stop bothering me. There were many decent and kind people I met in Morocco, giving me directions or chatting at various tourist stops. While I'm not thrilled at aggressive salesmanship, I understand it's part of the game, especially if I step into a commercial venue such as a souk.

But when I'm eating I draw the line. Why should any of us have to worry while eating al fresco? Isn't it our right? What gives a person, no matter their state of poverty, the right to bug us to the extent that they exploit their young children?

This happened to me a number of times, after which I had to retreat to indoor dining to escape what had become more than annoying. In the Marrakech Medina, where many makeshift restaurants open up at night and where diners sit at long tables, schmoozing with the staff and other tourists over roasted lamb, beef and chicken dinners, a procession of beggars continued their offensive. Some thrust packages of Kleenex at you; others cookies; still others offer nothing and just want your money.

It wouldn't be so bad if they took no for an answer, as was my experience in Bangkok, but the same people keep coming back, making them, and I'm sorry to have to say this, more akin to flies and other nuisances. And where are the child welfare organizations to prevent parents from sending them out to make a living? In Marrakech, there was almost a fist fight between a man, presumably one of the stall owners, and an elderly lady, who was somewhat of a Fagin character with young charges under her wing. He was ordering her out of the area and she was defending her right to be there.

There is a middle ground between such an intrusion in our lives and our desires to be compassionate. However, to put up with this sort of behaviour simply encourages its perpetuation. If more people boycotted such countries and strongly affected the billions of dollars that tourism brings in, perhaps the governments would do something to eradicate the misery that has caused so many of its citizens to behave no better than animals.

It's not as if Morocco is such a poor country; many of its people are at the very least lower middle class and there are a lot of professionals who live well. But what bothered me almost as much as the annoyances I've described was the eagerness of the tour guide at the Hassan II mosque in Casablanca, who told us that it cost 800 million dollars. It was her belief that it really cost four times that amount, and she said the money came from the king and the rest of the population.

To this I'd ask, why are they spending so much money on huge, gorgeous mosques and mausoleums to dead kings such as Mohammed V in Rabat when that money could be going to social programs which might elevate young people from the blight that surrounds their lives and gives them a ticket to nowhere while turning them into horrible human beings.

It's too simple to say, hey, if you don't like that sort of thing stay in the relative comfort of the USA or just visit countries in the First World. Why should any of us have to? Why shouldn't we be able to visit different cultures without this sort of abuse? Why don't CNN's Anderson Cooper and journalists at MSNBC, Fox News, NBC, CBS and ABC do reports about this to bring another dimension to what has become for many travelers not only an ordeal but in some instances a nightmare?

After a woman tried to get my attention without success, she actually waved her hand several times in front of me, eventually getting a couple of inches from my face, at which time her little boy started eating ice cream in my bowl. You think that's cute? Well, I don't, and my reaction was to angrily stand up and shout, at which time the waiters finally shooed her away.

Begging is not necessary and it's an abomination. But it will never go away until we become the aggressors instead of passive accomplices, as well as providing some constructive end to this human stain.