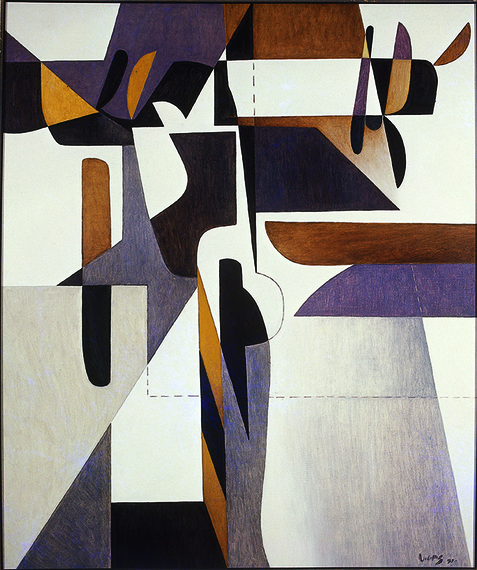 An international traveling museum retrospective of the late Venezuelan artist, Oswaldo Vigas' prolific life's work provides a rare opportunity to view the legacy of a modernist artist who shunned self-promotion. Yet, as his filmmaker son Lorenzo Vigas says, " he had a conviction in his own greatness." To shun promotion for the freedom to make the art that engrossed him, for sixty years, with an unshakeable conviction of gaining a place in history later, might seem like a contradiction in today's era of self-promotion. However, it really demonstrates the difference between internal and external motivation - a major topic in psychology today - which art critic Robert C. Morgan applies to art. When artists are too preoccupied with extrinsic rewards of fame and fortune in today's market-driven art world, they are in danger of losing touch with the intrinsic value of making art. But as history demonstrates, great talents are - and always will be - internally driven rather than externally driven by the demands of the art market. This makes Vigas' historic legacy interesting within contemporary discourse, because he is a reminder of the value of uncompromising internal motivation.

I had the opportunity of viewing this remarkable touring retrospective Oswaldo Vigas: Antologica 1943-2013 at MAC, the Museu de Arte Contemporanea da Universidade de Sao Paulo (on view April 2 to July 3) and spending time with the organizers in Sao Paulo, Brazil. This exhibition also toured museums in Lima, Peru, Santiago, Chile and Bogota, Columbia and will tour institutions in the USA (although dates have yet to be finalized). The organizers' enthusiasm over paying homage to Vigas is infectious, making me reflect on the dangers of commodification of art - particularly after a fascinating discussion with Robert C. Morgan in Sao Paulo about his thesis (for a paper he was presenting) on the difference between inner-driven and outer-driven artists.

The traveling retrospective includes more than 60 paintings and many sculptures. It was organized by the Vigas Foundation, led by his son Lorenzo - an acclaimed filmmaker who recently won the Golden Lion for From Afar, a film about a father and son relationship - which shows the unconscious influence his father had on his own creativity. Currently, Lorenzo Vigas is completing a long-awaited film on his father's work.

The exhibition organizers shared the ways in which they were personally touched by their relationship with the late artist in a museum panel discussion and informal discussions over lunches. Clearly, Vigas was larger than life and his largesse not only comes through his artwork but in the extraordinary lengths the Vigas Foundation and curators have taken to present his work in a way that invites a very personal response. 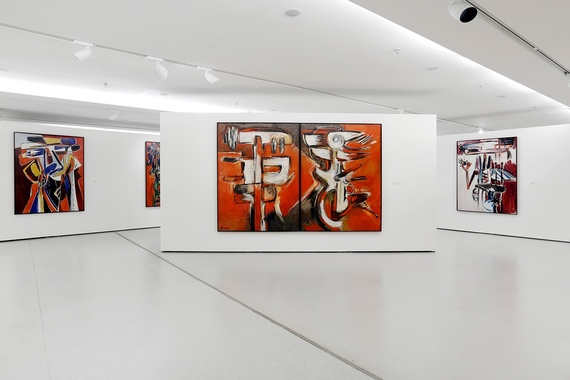 Vigas' work poses interesting challenges to a curator because Vigas transitions back and forth, from one period to another, and the curator must find a key to solve this puzzle which cannot be understood chronologically, since it is "lateral" as art critic Marek Bartelik says, because lines of interest cross over. Guest curator Katja Weitering, Artistic Director of the CoBrA Museum of Modern Art in Amsterdam, found the key by viewing his work as "chapters" which she says are "integrated in a very personal way" by the recurring motifs. She defines these chapters as: the human form, the use of mythology, the architectural approach and the free use of matter. She collaborated with Amsterdam interior architect Jowa Kis-Jovak who visualized her idea of five chapters as five cabinets. They have collaborated for several years at CoBrA Museum, because they both understand how much exhibition design supports curatorial vision. Exhibition design is usually either neglected or overwhelming, but Kis-Jovak's innovative design broke new ground. He uses diagonal dividing walls inside each cabinet to create two triangle spaces for works that need to be isolated. The design allows viewers to tour and detour, by walking down the exhibition one way and returning another way, viewing art works from different angles and re-visiting subjects, much as the artist himself worked. Vigas' collection of pre-Columbian and Japanese art, books and memorabilia - including photos with Picasso and other luminaries - are the heart of this exhibition design which tells the highly personal story of a great artist's life's work.

Vigas' trajectory is unique: as a mainly self-taught artist who began drawing at 16 years old and continued to make art while studying medicine. Right when he graduated as a doctor from the Central University of Venezuela in 1952, he won the prestigious Venezuelan National Fine Arts Prize and moved to Paris. He worked in Paris as a cultural attache for twelve years, making art and taking classes at Ecole Des Beaux Arts and the Sorbonne. Vigas was accepted into the heady mix of great artists who lived in Paris in the 1950s: Pablo Picasso, Max Ernst, Fernando Leger and Latin American artists Wilfredo Lam and Roberto Matta. Living and working around this explosion of artistic innovation, Vigas absorbed the dynamics in a non- academic way - as if through his pores - to find his own "visceral and irrational" language. 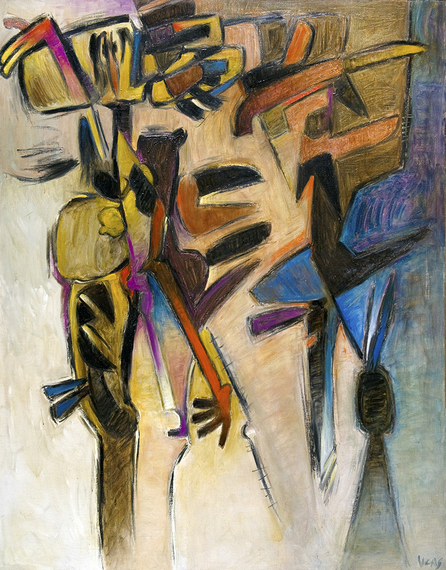 His characteristic mix of figuration and abstraction shows the clear influence of cubism, expressionism and constructivism, yet he always retained a distinctive flair for using fragments almost like fractals - which sets his work apart from his contemporaries. This use of fragments is also the crucial device of Vigas' oeuvre, that allows him to re-invent recurring themes throughout his long artistic career. Shapes are sometimes fragmented into geometric shapes and his images are often made of recomposed fragments.

After living as a foreigner in Paris for over a decade, he returned to Venezuela in the 1960s and began to dig into his heritage to explore local pre-Hispanic art in Guajira Peninsula of northwest Venezuela, where native peoples still live. Vigas' son, Lorenzo Vigas, insists that " he was always sure of his identity, and "did not want to be comfortable, so he changed and did something different." The elder Vigas began studying the iconography and mythological beliefs behind the artifacts he found and collected as he searched for his roots. 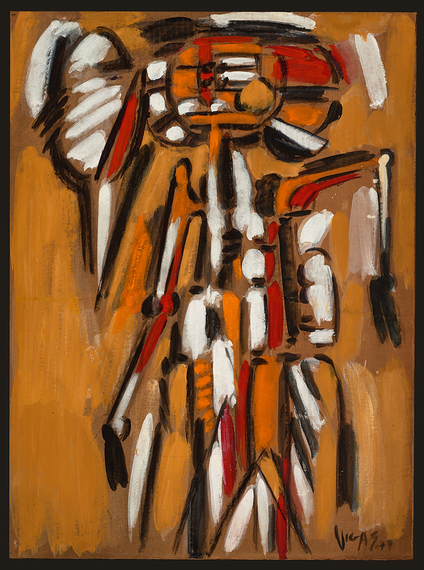 Figurative work was not appreciated in Paris at that time, but Vigas looked for non-European inspiration to reinvigorate figuration. He found a pre-Columbian female fertility figure that he could flatten, morphing her limbs into vegetation and covering her in minerals to create a new figuration. This atavistic rendition bridges what he absorbed in Paris with his own cultural heritage. Vigas transforms the Venus de Tacarigua fertility figures into archetypal "witches" or "brujas" which became his trademark. Using strong Caribbean reds, yellows and blues to symbolize the land, forest, fruit, flowers and minerals, he re-establishes a natural order which brings his paintings to life.

Venezuelan art critic/historian Belgica Rodriguez, who was a leading force in the organization of the traveling exhibition, says " the soul of Vigas' work is the figure of a woman." Vigas' female figures are deformed, recalling both pre-Columbian Venus figures and the deformed female figures created by Picasso, de Kooning and Lam. In the 1960s he made his Personagrestes series, in which his witch figures dominate compositions with lines and color planes moving in multiple directions. The witch figure changes every decade, but it is always the emotional force of maternal power that obsessed him.

Although Vigas is acclaimed as the most important Venezuelan artist and left his mark in Paris in the fifties, he is only recently gaining the international attention he deserves. He chose the thoughtful life of a working artist surrounded by a supportive family and many artist friends who regularly visited his atelier rather than the world of galleries - which he shunned until late in his life because he did not want market dictates to hinder his artistic freedom. He pursued the "irrational side" in his work, and was vocal in art debates criticizing the kinetic art movement in Venezuela for political correctness. By contrast, the confidence and skillfulness of Vigas' brushwork and his emphatic use of dramatic black are a testimony to his freedom of spirit.

Vigas' conviction that he would find his place in art history late in life might be old school but is certainly happening now through the efforts of the Vigas Foundation and acclaimed devotees. Miami 's Ascaso Gallery began representing Vigas late in his life and will exhibit his work in December during Art Basel in Miami Beach Fair. International visitors to SP- Arte 2016 had the opportunity to view this traveling retrospective currently at MAC, in Sao Paulo, located across the road from the fair, in an Oscar Niemeyer building - ideally suited to Latin American modernist art which was influenced by Brazilian architects.

Vigas might have chosen the introspective life of an artist over self-promotion, but he was still very conscious of his own history and the legacy he would leave. His tactic of immersion (working in Paris) and distance (returning to work in Venezuela) makes him an exemplary romantic figure who epitomizes the life of an uncompromising artist.