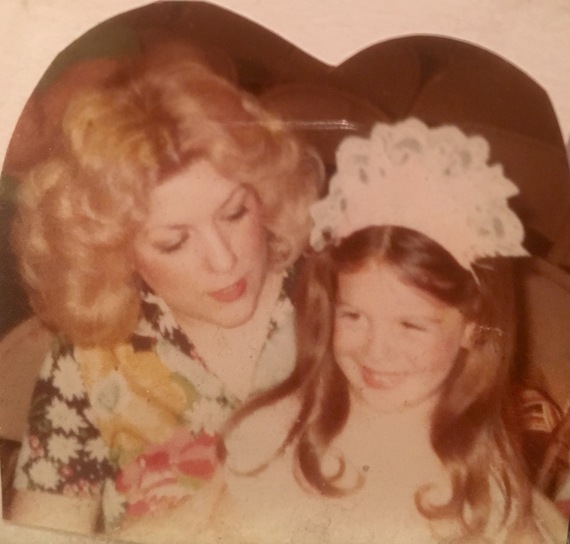 Like a car showing its age from driving thousands of miles on rough terrain, I have had many starts and stops, fits and sputters, and, yes, breakdowns on my road of grief. I lost the person who always rode shotgun three years ago today.

Our last drive to the hospital is forever etched in my mind. When I arrived at my mom's that morning, she was almost unrecognizable--even though I saw her the day before. She was in her living room, sitting uncomfortably on the edge of her burnt orange couch-- the hue of a magnificent sunset. The zipper wasn't closed all the way on the suitcase by her feet. She was disoriented, saying random, bizarre things, yet still coherent enough to worry about who would care for her beloved dachshund in her absence.

When we set off on that drive, one we had taken hundreds of times before, I instinctively knew it was going to be the last time. She was weak from her unrelenting fight with ovarian cancer, relying on a feeding tube to nourish her frail frame. A rogue tumor strangled her intestine, making it deadly to eat. To satisfy her craving to chew, she was allowed to suck on hard candies. I traveled to the most obscure candy stores in a quest for variety, desperate to make a diet of suckers more palatable. My center console was stuffed with wrappers.

She was admitted right away. New scans didn't show any progression of disease, but I had an ominous feeling. My fear was confirmed that next morning when 30 doctors and nurses--seemingly the whole cast of ER and Doogie Howser, M.D.-- descended on her hospital room. Monitors beeped loudly, relentlessly as her blood pressure dropped dangerously low. High-dose antibiotics were administered to fight a raging infection--her body was septic--and she was transferred to the Intensive Care Unit.

True to form, my mom surprised the doctors. When she was diagnosed with end-stage ovarian cancer in 2002, she was given a 20 percent chance of surviving five years. There we were, 11 years later, and she was still defying expectations on antibiotics. Still, her doctor remained guarded. He gently told us that he didn't know if she would make it through the night. My mom's response is one I often replay in my mind.

"I know how hard it was for you to tell me I may die," she said, her doe-shaped eyes full of compassion. "Thank you for your kindness. You did a good job delivering bad news. I know exactly where I am. Don't worry about me. It's okay."

My mother's remarkable resilience, her bravery, her empathy, her selflessness, her mind-numbingly stunning spirit made a tear spring to the corner of her doctor's eye. When he turned to leave the room, she consoled me, her only daughter, her very best friend. I didn't have the strength to remain as composed as my mom. As sick as she was, she held me up...like she always did.

She survived that night, and it turned into one I will forever cherish. She wasn't a lifeless vegetable relying on the kindness of machines. She was present, aware, engaged. When I think about it, all of the qualities I long for today, the 1,095th day since her death, were on display that night, her last night of consciousness.

Today and every day, I miss her heart. Her doctor told me that never in all his years of practice did someone try to console him after he delivered bad news. No one had a heart bigger than my mom's, and I owned prime real estate in all four chambers.

Today and every day, I miss her watchful eye. She was dying in the ICU, but worried about her daughter being uncomfortable sleeping in a chair next to her hospital bed. She asked the nurse to bring me extra blankets, knowing I am part reptilian. She advocated for her child, always, until she could no longer speak.

Today and every day, I miss our conversations. That night, I asked her everything. I wanted to make sure I could answer any question about her life...from favorite flower (lilac) to favorite song (Africa by Toto) to favorite fruit (watermelon). We traded stories, told jokes, giggled, reminisced, played music. At one point, I laid next to her to breathe in her scent one last time. It was a night that provided the grief soundtrack for the rest my life.

Today and every day, I miss her wishful lipsticking. My mom was puffy from all of the medication, donning a johnny, and attached to an IV...but she still had her lipstick. She reapplied often that night, as she always did, abiding by the "If you're sad, add more lipstick and attack" mantra.

Today and every day, I miss my co-pilot. After that night we shared together, my mom slipped away. She laid there, with her eyes half open for hours on end. Lifeless, vacant, gone. I had to make the gut-wrenching decision to pull the plug the following morning. She would never leave me willingly...not my mom.

I had to drive home from the hospital with my mother's half zippered suitcase. I was ill equipped to stare at the candy wrappers in the center console, to drive alone, to navigate my way back. I looked at my passenger's seat in disbelief. Three years later, I still look at it in disbelief.