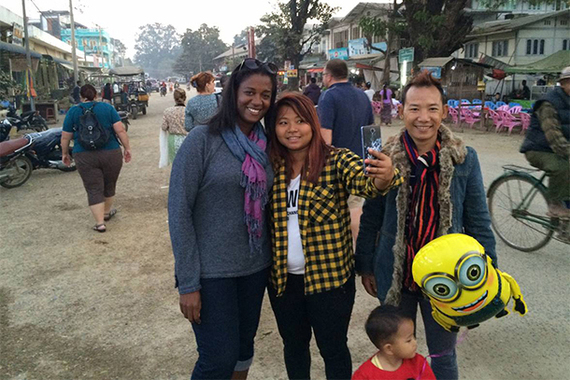 We didn't turn around when the name was called the first time because, why would we? My husband's name is Ish, mine is Heather; neither of us is an internationally recognized rapper.

When it came a second time, we couldn't resist.

The local youth smiling and waving from across a dusty road in this tiny village in Myanmar was so visibly pleased to catch our attention that we couldn't help but smile back.

It wasn't the first time my husband has been mistaken for a celebrity. He has been Michael Jordan and Will Smith too.

Men who look nothing alike … except for their race.

And for every "Jay Z" there is also a "Michelle Obama" (often), "Oprah Winfrey" ( a few times), and "Beyonce." (Just kidding. Not even once. But you get the point.)

It never happens in North America. It always happens when we are traveling in places where those famous Black people may be the only Black people the locals have seen. Places where people who look like me aren't a dime a dozen; places like this Myanmar village we are in now.

It has also happened in China, India, and Cambodia. But sometimes it happens in places like West Africa, where the name is called out not to highlight skin color, but to suggest that we are American. They're wrong there too: I was born and raised in Canada, a suggestion often met with disbelief. "There are no Black people there," they'll tell me despite the fact that I am standing right in front of them telling them the opposite. I laugh then too.

Neither of these situations has ever really bothered me. I get that people who live in places where what they're going to eat the next day and whether their children will survive are real concerns, may not understand the politically correct nuances around race. Or the offense that might be taken when they assume that any Black person who crosses their path must be one of the six they've seen on TV.

RELATED: Rude Behaviors You Can Totally Get Away With Abroad

I also don't think it's born out of racism. In fact, in my experience, it has almost always come from a different place.

People see me—someone who looks different—and search for a way to communicate and connect. As a traveler, I want that. I too have visited places and seen people with tribal scarring or cultural differences and been curious. And so when people approach me, I engage.

I have yet to encounter malice. Instead, I usually find a genuine curiosity, one that often leads to memorable experiences. Engaging has helped more than it has harmed. And, I find, it has also often given me an intimate interaction with locals in a way I might not have had if I looked like the tourists they're used to.

The key for me is respect.


Further down that same street in Myanmar, as Ish and I walked with our group of mostly White colleagues, a couple and their child zipped by on a motorbike. I heard the bike screech to a halt and then turn and head back towards our group.

Moments later I was being asked in broken English and hand gestures if the family could take a picture with me. I agreed and the four of us crowded in for the shot. Had they asked to take a photo of me, I'd have refused. That's objectification, not curiosity.
When we're done we shake hands, introduce ourselves and smile.

No one calls out for Jay Z when we turn to go. By the time we're done they know our names.

Read the original story: Traveling While Black: Becoming Beyonce by Heather Greenwood Davis, who is a contributor to SmarterTravel.