Debra Zeit, Oromia, Ethiopia -- I just met a group of young women who save lives for a living. They are not nurses. They don't even have a high school education. Yet, they are professional lifesavers. How? These young women are community liaisons between the Godina Health Clinic and the rural community of Debra Zeit. In doing so, they are critical players in a new trend in global health. 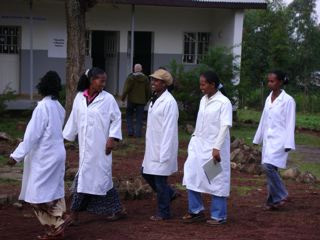 In developing countries like Ethiopia, the global health community's focus is starting to turn from initiatives to take on specific diseases like HIV/AIDS, Malaria and Tuberculosis to programs that strengthen public health infrastructures as a whole. The so-called "Health Extension Workers" that I met are at the cutting edge of this trend.

As I travel throughout Africa and Mexico with President Clinton this week I'll document how the donor community (including the Clinton Foundation and the United Nations Foundation, which is sponsoring my trip and sponsors my blogging UN Dispatch, respectively), UN agencies like UNICEF and the World Health Organization, and governments are shifting from disease-specific initiatives to strengthening public health systems.

The story of the young Health Extension Workers helps explain why this shift is so important--and why tackling the scourge of HIV/AIDS, Malaria and other public health emergencies in the developing world depends on recruiting more women like these.

First, some background that helps explain why targeting the disease--and only the disease--is not always effective. In the developing world about 30% of children born to mothers with HIV contract the virus. A drug that helps prevent transmission at birth is relatively inexpensive so around the millennium, the attention of the global health community turned to prevention of mother to child transmission of HIV/AIDS. Donors, NGOs and national governments invested great money and effort to programs that distribute this drug to HIV infected women.

But they hit a snag. The single pill, while helpful, did not have the dramatic affects that donors had expected. Not enough pregnant women were tested for HIV. And those that did know their HIV status did not always have access to health clinics. Even women that did take the pill did not always have the means or wherewithal to maintain the 18 months follow-up regimen. Programs to prevent mother to child transmission were, simply put, not comprehensive enough to put as large a dent into the statistics as donors had hoped.

Enter Health Extension Workers. Young women, who generally lack secondary education, are recruited as community liaisons for local clinics. They are trained not in medicine, but in social work. They are rural health clinics' eyes and ears in their local community. If their neighbor is pregnant, the health worker will let her neighbor know of available HIV testing and prevention programs. The worker is the go-between for the clinic and rural populations.

In Rwanda, use of community health liaisons is more commonplace than in Ethiopia--and have results to show for it. Rural Rwandans generally have quicker access to malaria medicines and higher adherence rates to treatment programs. In some Rwandan villages, women are even elected to the post in open caucuses.

This was one critical missing link in previous efforts to combat mother to child transmissions. This week, President Clinton's visit to Godina Health Center in rural Ethiopia marked the launch of a new partnership between the Clinton Foundation and the government of Ethiopia to, among other things, train 30,000 Health Extension Workers in rural communities throughout the country.

Clearly, this is an ambitious target. Nevertheless, is a goal upon which many thousands of lives will depend.

Mark Leon Goldberg writes for UN Dispatch, a blog about the UN and global affairs. He is traveling with President Clinton this week through Africa and to the Global AIDS Summit in Mexico City.