A funny thing happened on my way to Denver this morning. I shared an American Eagle commuter flight from Chicago O-Hare to Denver with former Illinois Governor Rod Blagojevich. Politics isn't my usual beat, but traveling is -- and there we were.

I was going home to my wife and daughters. Blagojevich had just said goodbye to his. He was on his way to Colorado to serve 14 years in a minimum-security federal penitentiary in Littleton after being found guilty last year of 18 counts of corruption. He begins his sentence today. 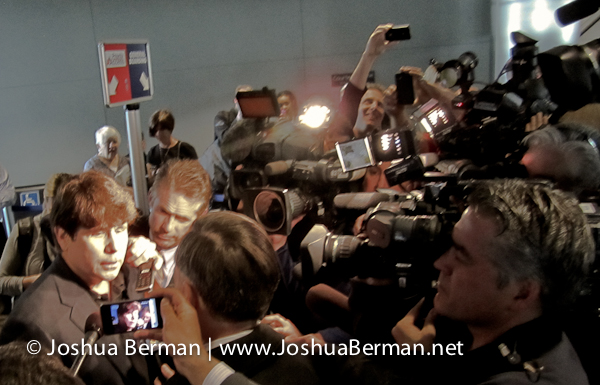 Inside Chicago's O-Hare Airport, Blagojevich caused a stir when he emerged from security and sat down to put his shoes back on. He stood up, wearing a sport jacket and smile, his signature coif bobbing slowly through a growing crowd of local media and fellow travelers, all with upraised cameras in hand. 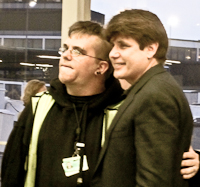 The ex-governor interrupted his cross-country perp walk to pose with anyone who wanted a photo. Most Chicagoans fondly wished him well and he smiled warmly and thanked them.

He did not wear handcuffs or any other restraints and was accompanied by a couple of Chicago police officers and a couple of plainclothes "companions." Then he got on board and the rest of us followed.

It was a small plane without business class, and I took my assigned seat two rows in front of him, right in the middle of the Chicago press corps.

The captain had announced earlier that filming on board was prohibited without American Airlines corporate approval, but 15 minutes into the flight, there were four cameras out, shooting inflight B-roll of the governor. I snapped a few shots as well.

Suddenly, the flight attendant, a small wiry woman, came rushing down the aisle and laid into us about the no-filming rule.

"Don't make me come back here again!" she said, treating us like middle school students. "Do we understand each other?"

I could see the Channel 2 guys biting their cheeks to keep from laughing.

"Yes, ma'am," they answered and then snickered and ribbed each other when she turned her back.

Blagojevich turned to the reporters. I thought he was also going to read them the riot act, but instead he said good-naturedly, "So you guys staying with me all day or what?" 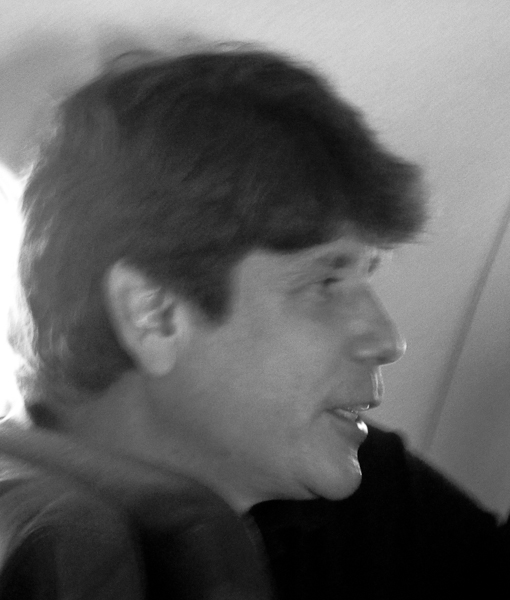 They laughed and told him they had teams waiting in Denver and they had no idea what was kind of circus it was going to be. Every step of Blagojevich's journey from his Chicago doorstep to his new home in Littleton, he was scrutinized and recorded on all the major networks.

"My heart goes out to you," said the Fox News cameraman. "I have two kids also and can't even imagine."

They chitchatted about families and Chicago neighborhoods, as if they were just two random travelers.

As we began our descent, Blago turned away and watched the approaching mountains through the airplane window.

Joshua Berman is an Out West columnist for the Denver Post. An earlier version of this story first appeared in The Denver Post: "With Rod Blagojevich on the plane from Chicago to Denver -- and a federal prison"