If you want to get really, really away from it all, try the western segment of the Alaska Marine Highway System (AMHS).

AMHS is best known for its ferries that ply the waters from Prince Rupert in British Columbia, Canada, all the way along the Inside Passage in eastern Alaska. But it also has a route, every month or so, from the little town of Homer to Kodiak Island, and points west along the Alaska Peninsula right out into the Aleutian chain to Dutch Harbor on Unalaska Island. 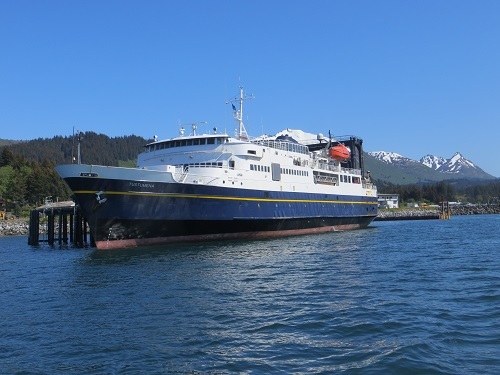 Now, on the northern side of the Alaska Peninsula and the Aleutian Islands is the Bering Sea, reputedly one of the harshest and roughest, if not the harshest and roughest, on Earth, a state of grace that can overflow onto the Pacific side, right into the passage of AMHS - which explains why Yours Truly is struggling aboard in Homer at 10 P.M. in early June with two tons of Dramamine in hand.

The ladies and gentlemen at AMHS say the seas should be tranquil at this time of year. But what the hell do they know! 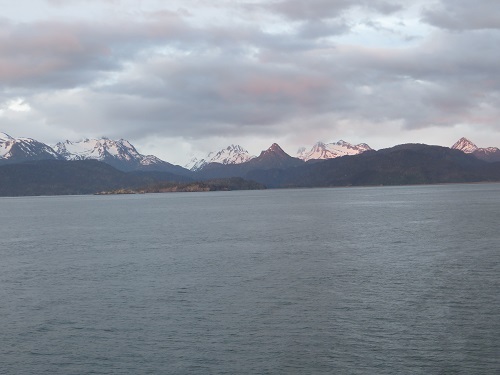 Our good ship, the M/V Tustumena, which does the return trip every three to four weeks in season, looks a right old crate, even if she uses high-falutin terms like foyer for the grotty entrance on the promenade deck and solarium for a just as grotty windowed-in space on the upper deck.

I splurge out $563 for a cabin with shower and puke-necessary toilet bowl, over and above the $263 passenger fare, for the four nights aboard. The supplement is for the whole four-bunk not-enough-space-to-swing-a-cat cell, but I can use a different bunk for each night. It has a window looking out onto a deck that is a main thoroughfare and smokers' rendez-vous.

The vessel must be making all of three miles per hour leaving Homer. 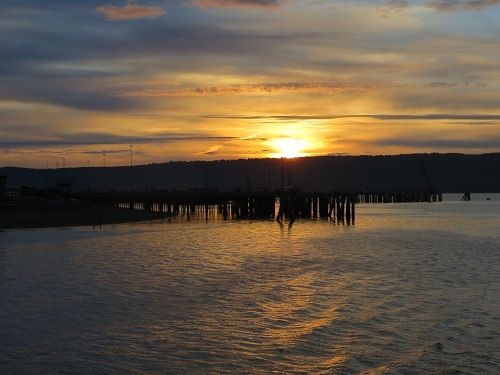 My fellow passengers are an interesting brew. There's an ancient gent who spends most of the time with his mouth half-agape, yellow rabbit's teeth protruding like the Rock of Gibraltar. Another bald old guy looks just like Yoda on a very bad ear day.

Another unhinged ancient kneels down every now and then in the front of the solarium and smashes his hollowed palms together to produce reverberating thunderclaps. 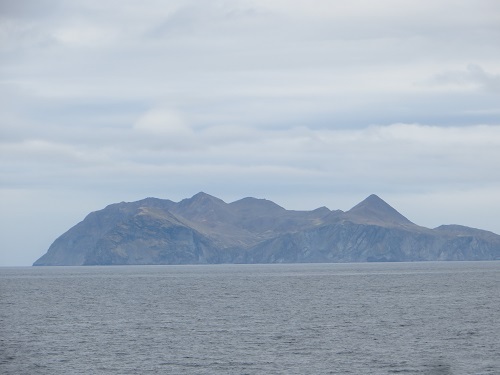 This and following pictures show views along the Tustumena's path

There's a beak-nosed birder who's taken up permanent residence at one of the few tables in the aft lounge, with something looking very much like the Hubble telescope affixed to his camera lens. 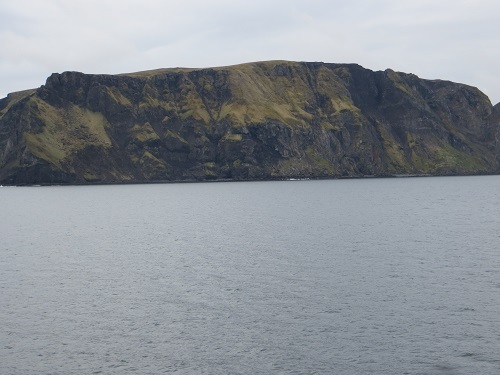 Then there's the serial killer sitting at another table, endlessly and noisily shuffling a deck of cards, slapping them down ferociously all night as he plays solitaire, jerking his head and hands psychotically, drumming out a maniacal tattoo of death on the table top - and staring at me.

And here comes my Deep Throat for the trip. Wally's an ancient fisherman who knows a bit about the Bering Sea, having served on a boat there in 1961, the year he left Washington University after majoring as a German teacher but deciding he preferred fishing instead. 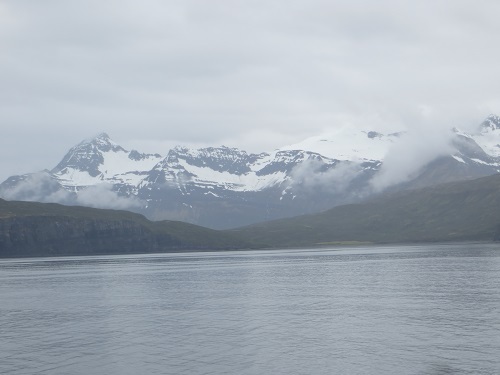 The Discovery Channel has made the Bering Sea the star of its reality show, Deadliest Catch - with Dutch Harbor on Unalaska, the main Aleutian island, serving as base for the fishermen risking life and limb to catch crab in its treacherous waters, and Kodiak hosting the U.S. Coast Guard station that tries to save them in and ex extremis.

'As for being the roughest sea on Earth,' quoths Deep-Throat Wally, 'it's like the Vietnam War - it can be truly terrible, but then there are the lulls. The Discovery Channel only focusses on the bad.' 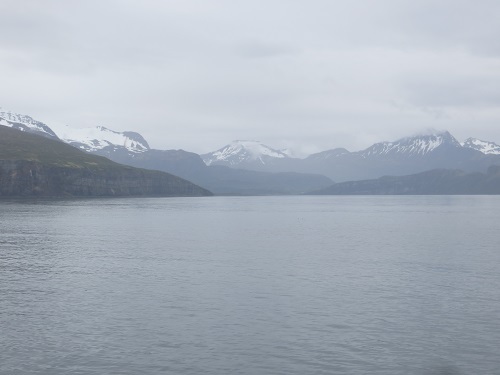 The worst part, requoths he, is the enormous amount of work on board, with barely time to sleep. Some crews drug themselves up on adrenaline pills, gallons of red bull, caffeine and the like just to be able to cope.

After his year in the Bering, Wally decided that a gentler, kinder fishing experience was more up his marine highway alley. Now, 54 years later, he is more or less retired in Chignik, a little port on the Alaska Peninsula, 18 hours' ferry time from Kodiak, where he owns a vessel he rents out for sports fishing. 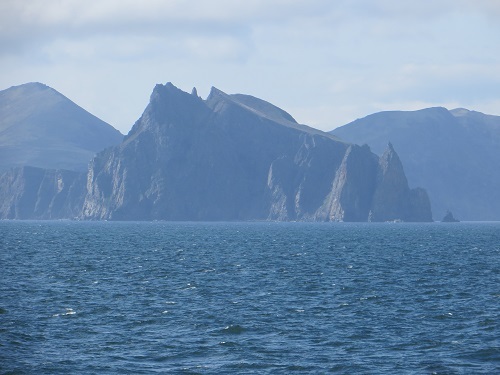 The good ship Tustumena's backdrop, the vast range of mountains and volcanoes that stretch down from Mt. Denali through the Alaska Range, the Alaska Peninsula, and the Aleutian Islands, covers one of the most active regions of Mother Earth's dyspepsia, finally submerging in the Western Pacific in a vain effort to shake hands with Russia's Kamchatka Peninsula.

Smoking and erupting cones abound, the archipelago's 60-odd volcanoes form the longest straight line of fire-belchers anywhere, and the area accounts for 10 percent of all earthquakes. 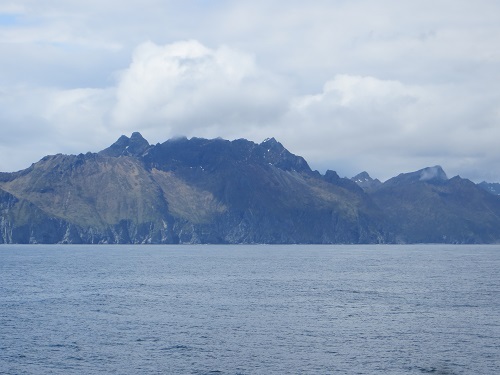 Island after island, and rugged peak after rugged peak succeed each other as Madam Tustumena plies her passage along this gorgeous landscape.

On the mainland side the mountain spine humps along endlessly, its vertebrae tearing upwards like saw teeth, some bleak, barren, and brownish grey, others sage green with lichen, yet others, aspiring higher, streaked with snow. I don't know whether it's auto-suggestion, but you certainly get the idea of utter remoteness. 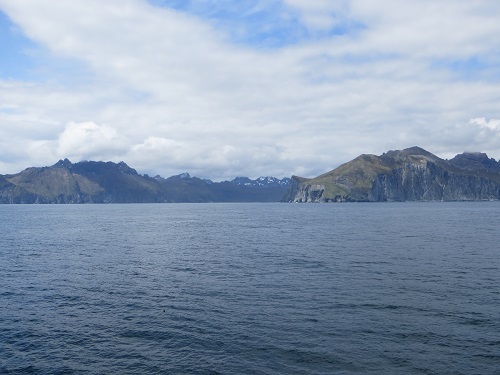 Whoozie with Dramamine, I repair to my quarters on this first night aboard, and arrive in Kodiak on tranquil seas, exactly as forecast by my 'know-nothing' ladies and gentlemen of AMHS. Here we have an eight-hour stopover to view the sites, including the largest Coast Guard station in the U.S. of A, as featured in Deadliest Catch. 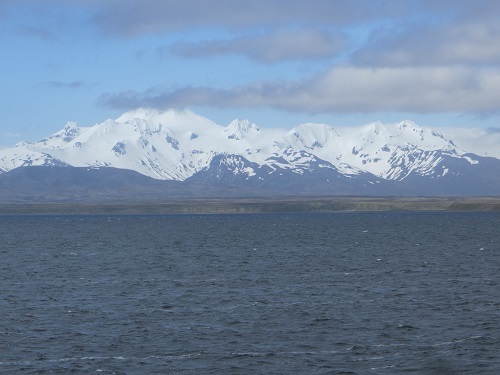 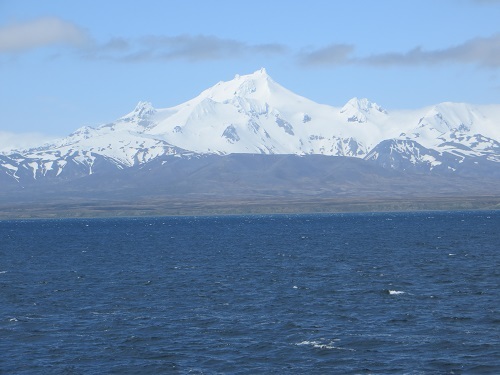 As for the other deadliest catch, I can only hope the maniacally card-snapping, head-jerking, hand-jumping psycho serial killer doesn't re-board.

[Upcoming blog on Sunday: Kodiak Island at its finest] 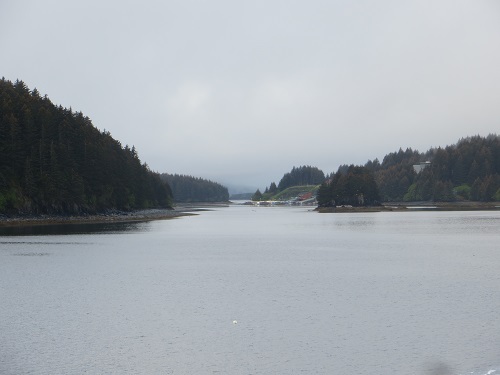 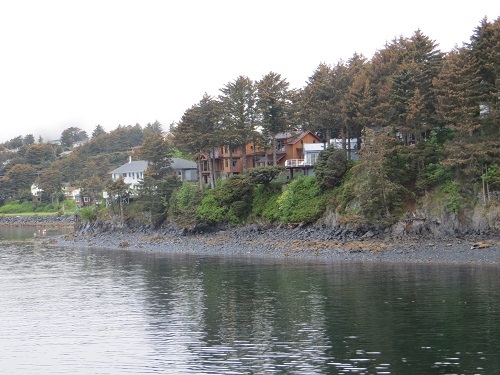