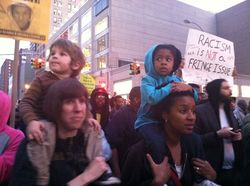 In Psalm 139, the psalmist thanks God for being awesomely and wonderfully made. This Psalm began to speak to me when I was 5 years old.

We were the only black family on the Air Force base in New Hampshire. I had great friends, little blond and red headed girls and boys, and life was just fine. Then, Lisa moved into our community. She was from Mississippi and she called me a "nasty nigger." In her gaze, I had my first experience of otherness, and it really hurt me. My father went to the base commander to make these racist words stop in his daughter's classroom. And my mother had one of those talks with me that black parents have with their children.

Sometimes the talk goes like this, "Can you believe how silly this is: some people will not like you because you are black. Isn't that crazy? You just ignore them and keep on doing your thing, child. You are my child, you are black and beautiful and fabulous. And I love you!"

My mother gave me a version of that one. She read the Psalm to me, told me that God made me just as I am, awesomely and wonderfully, and then we prayed and I went to sleep.

Sometimes the talk goes like this: "Baby, you will have to work harder, be more superior in school and at your job in order to get ahead. That is just the way it is."

And then there is this one: "You better smile, nod, and be quiet. Don't look those people in the eye; they will think you are sassing them, and they might kill you. Just because you are black."

Mamie Till gave that talk to her 14-year-old son, Emmett Till, right before she sent him to the Mississippi Delta to stay with relatives for the summer. After an encounter with a white shopkeeper named Carolyn Bryant, Emmett was hunted down by her husband, Roy, and his half-brother J.W. Milam. They took him to a shed, pistol whipped him, gouged out one of his eyes, shot him in the head, and threw Emmett's 14-year-old body in the Tallahatchie River.
It was dangerous to be a black boy in those days.

Interviewed in Look magazine in 1956, Milam said, "I stood there in that shed and listened to that nigger throw that poison at me, and I just made up my mind. 'Chicago boy,' I said, 'I'm tired of 'em sending your kind down here to stir up trouble. Goddam you, I'm going to make an example of you -- just so everybody can know how me and my folks stand.'"

It is dangerous still, it seems, to be a black boy.

You can be walking down the street, wearing a hoodie, look "dangerous," and someone will chase you and kill you dead.

On Wednesday night, hundreds of people ⎯- women, men and children -⎯ took to the streets of New York and marched from Union Square in reaction to the senseless killing of an unarmed black teenager, Trayvon Martin. In their hoodies, with their children hoisted on their shoulders, they marched and chanted, full of lament: race clearly still matters in these United States of America. Black teenagers scare some people; therefore, walking while black is a dangerous thing to do in some places, some times.

How dangerous is a black boy, armed with Skittles and a soft drink? How frightening is some mother's baby, some father's son, just because he is black, wearing his jeans down low, hoodie-adorned as a fashion statement?

I walked by some black young men last night, on the way home from the church meeting that kept me from marching. I saw them in my singular march to the subway; they were standing close together, just across from Grand Central Terminal. They were beautiful these young men, strong black bodies, awesomely and wonderfully made. As I approached, my maternal instincts kicked in, along with my desire to hug and protect them from harm.

Those young men were about the age my own son would be right now, if I had one. So was Trayvon Martin.

These are our children: Trayvon Martin, those young men I passed last night, the two little girls in this photo taken by my colleague. And they are in danger. We have to fix this; we have to address the ways racism in these United States is like a virus that mutates and continues to infect us. Our children are not born to hate, nor are they born with fear. But adults who have the virus can harm them, and children can catch the virus, too.

It can feel overwhelming to address racism, but we have to do it. You can join our multiracial/multicultural community, Middle Church, on Sunday in person or live stream our celebration at 11:15 a.m. EST; wear your hoodie and plan to pray for healing. Hear special music written just for Trayvon by Bil Wright and Dionne McClain-Freeney. Hear my sermon, a call to action. Wherever you are, sign this petition. Send a bag of Skittles to the Sanford Florida police department. And post a photo of yourself or your friends on Facebook or Twitter in a hoodie, with the caption: "Warning: We are NOT dangerous, racism is."