According to CBS Los Angeles, about 200 protesters stood on the southbound 10 Freeway in Crenshaw to block traffic. Protesters told NBC LA that the police fired rubber bullets in order to disperse the crowd and ended up arresting at least one person on suspicion of throwing rocks and bottles at an officer.

Ruth Fowler, an LA-based author and HuffPost blogger, was among one of the protestors on the freeway. In an email to The Huffington Post, Fowler described the scene as peaceful and happy.

"We were supported by cars who beeped their support, as did the local community who waved, gave us water, shielded us from the police with their cars, and were in complete solidarity with us," Fowler said.

The demonstration on the 10 freeway lasted from 6:20 p.m. to 6:44 p.m., officials told the Los Angeles Times, and the freeway has since reopened.

But when the Fowler continued on to Crenshaw Blvd. with the other protestors, things got violent. According to Fowler, police officers split the large march into smaller groups, and she was one of about 100 that headed down a side street. Despite the fact that they were peaceful and on the sidewalk, said Fowler, police still shot rubber bullets into the crowd.

"We stood there, about 100 of us, unarmed, peaceful, face to face with riot police, when the police suddenly started shooting," wrote Fowler. "My friend dragged me out of the way and the girl in front of me -- Liz -- and her boyfriend Jeff were shot in the face by rubber bullets." Fowler said in a tweet that she is 18 weeks pregnant, and that the rubber bullets narrowly missed her.

LOOK: Photo of the 10 freeway protest. Story continues below.

The 10 freeway protest was just one of multiple demonstrations that occurred in Los Angeles that day.

In East LA, a coalition of activist, artist and student groups gathered in a peaceful protest that lasted from about 6 p.m. to 9 p.m. Héctor Flores, one of the protest organizers, told HuffPost Voces that the group was demonstrating for a number of causes, including racial justice, immigration and gay rights.

Protestors on Crenshaw Blvd. also reportedly marched into traffic at around 8:15 p.m., according to CBS Los Angeles. Footage from CBS Los Angeles' helicopter on La Brea Ave. showed protestors in the streets and on top of moving cars.

"Nonviolence is a powerful&just weapon..It is a sword that heals-MLK." Exercise 1st Amendment and practice peace in City of Angels tonight.

By about 9:24 p.m., protestors had reached the corner of Hollywood Blvd. and Highland Ave., an area known for heavy pedestrian traffic from tourists and residents. Twitter user Hollywood_WOF, an unofficial community page that tweets about premieres, deals and events on and around Hollywood Blvd., tweeted a photo of a large crowd, said to be a mix of protestors and tourists. At around the same time, LA Times reporter Andrew Blankstein tweeted that nearby concert venue Hollywood Bowl was also letting out, which was a "recipe for gridlock."

About 80 protesters chanting "No justice, no peace" gathered in front of the CNN building on Sunset Boulevard in Hollywood shortly after midnight Monday, the Los Angeles Times reports. Police declared an unlawful assembly and began telling people to disperse, making arrests and a few officers fired non-lethal rounds.

At that protest and the others in LA Sunday and early Monday, police arrested a total of six people, mostly for failure to disperse and one person for battery on a police officer, the Associated Press reports. A handful of people also were given citations, mostly for blocking a street or jaywalking.

A citywide tactical alert was called off Monday. 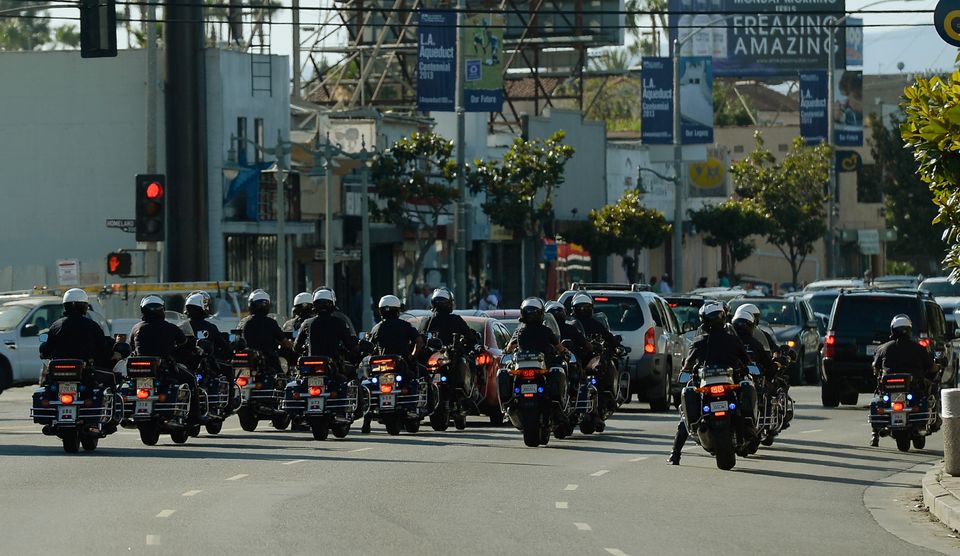