Protesters marched south on Broadway from Union Square, many carrying signs in support of the slain teenager. At times, the crowd could be heard chanting "No Justice. No Peace."

The march eventually turned onto E. 9th Street toward 4th Avenue. HuffPost's proximity to the demonstration allowed us to capture photos and video of the event.

BuzzFeed captured images from the rally while it was still in Union Square:

Photo by BuzzFeed’s @maceyjforonda of the Union Square rally for Trayvon Martin in New York pic.twitter.com/5shRlsVzDk

The march for Trayvon Martin out of Union Square has started in New York https://t.co/s0MWCycPYs

They also tweeted a photo of police waiting at W. 34th Street and 6th Avenue for the march to arrive:

The demonstrators were able to march past this barrier. BuzzFeed's Macey J. Foronda later tweeted a picture of marchers after they made their way to Times Square for a sit-in.

Beneath the glowing neon lights, hundreds chanted: "Trayvon is dead. Zimmerman is free. That's what we call democracy."

The protests come a day after George Zimmerman was found not guilty of second-degree murder in the shooting death of Martin.

The verdict has elicited passionate responses from around the country. President Obama reacted to the verdict with a call for "compassion and understanding in our own communities." Describing Martin's death as a "tragedy," he stated, "we should ask ourselves if we're doing all we can to stem the tide of gun violence that claims too many lives across this country on a daily basis."

In addition, the Justice Department announced that it is going to review the Zimmerman case.

View Photos Of The Demonstration In The Below Slideshow 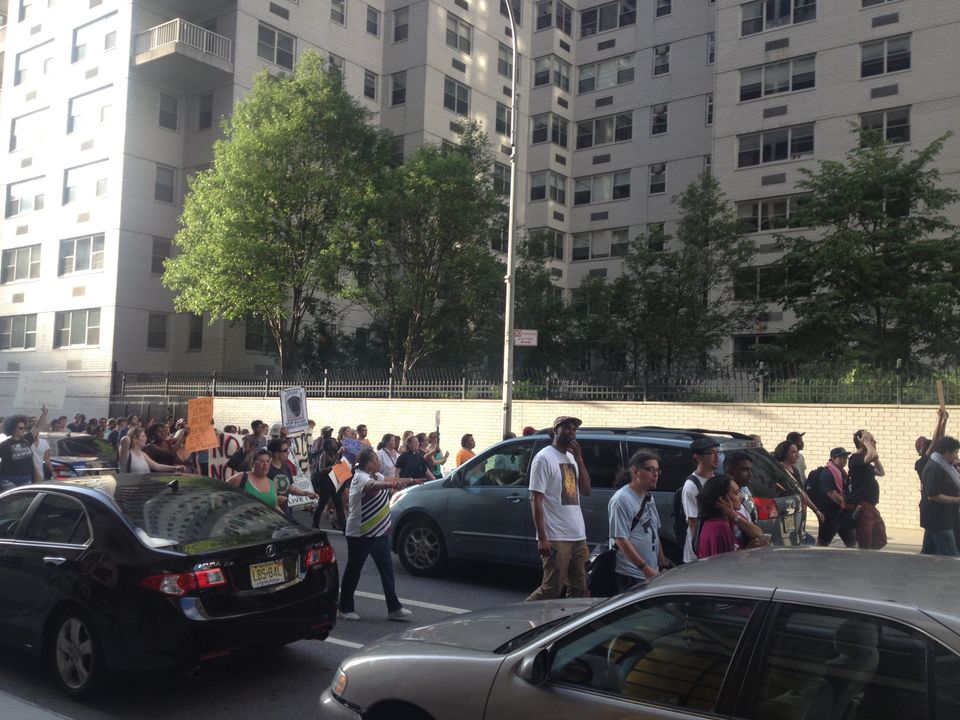