As news spread of the jury’s acquittal of George Zimmerman for the killing of Florida teenager Trayvon Martin on Saturday evening, social networks and cable channels buzzed with heated reactions. But Tweeting only goes so far, and people who wanted a stronger, more public way to express their displeasure with the verdict and support for Trayvon flocked to the streets for spontaneous protests in cities around the country.

From San Francisco to Sanford, Florida; Atlanta to Washington, late Saturday night and Sunday saw people flooding into the streets. Several cities had braced for riots in the event of an acquittal, but most of the marches were peaceful demonstrations of the verdict.

Here, a look at some of the images and words from impromptu protests, marches, vigils, and gatherings from across the country.

Inklings of a #Trayvon protest in #Harlem at ACP plaza pic.twitter.com/YOeBIwOr2g

We are all Trayvon. Manif New York Union Square. pic.twitter.com/P8eK9rB6AU

I left, but looks like Trayvon Martin march made it up to Times Square. pic from Brian Brooks pic.twitter.com/xbSqqFgAgL

Outside Dept. of Justice: a quiet protest for #trayvon. @ABC7News pic.twitter.com/1IEIkKpeQZ

Young boy holds up "We Are All Trayvon Martin" sign up at the #Chicago #JusticeForTrayvon march pic.twitter.com/WIWuRDKbdb

Tonite in Chicago: a rally & march for Trayvon Martin. Another planned for noon Sunday at Daley Plaza, pic.twitter.com/jINgnHQB1r

100's of fists in the air in a moment of silence for #Trayvon #justicefortrayvon #Chicago pic.twitter.com/63CehX0J6t

#JusticeForTrayvon march in Chicago stretching over a city block chanting "No justice, no peace, no racist police" pic.twitter.com/HwsXDVqPdL

@blackvoices Rally in St. Louis at the Justice Center pic.twitter.com/3nDl82FAHZ 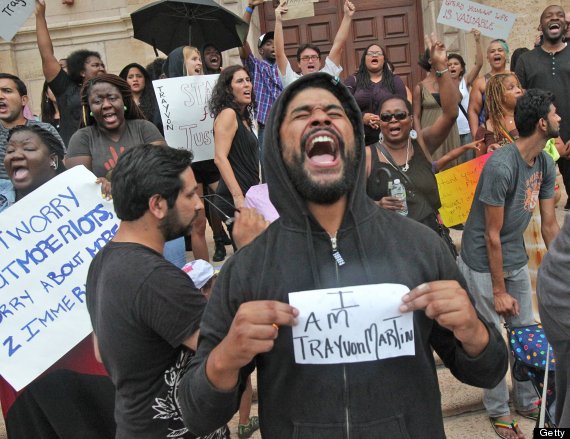 In Oakland, however, the protests were more violent, as HuffPost's Carly Schwartz reported. Some demonstrators broke windows on area businesses, started small fires and vandalized a police car.