When a white Hispanic neighborhood-watch volunteer admitted to police that he had shot and killed an unarmed black teenager -- and police accepted his assertion that he did so in self-defense -- it was "taking off the scab of the wound" in Sanford, Fla.

“It’s not the officers who are out and about. It’s the leadership,” Lowman Oliver, pastor of the Sanford St. Paul Missionary Baptist Church, told The Huffington Post. “When you are the recipient of a different kind of treatment, it’s taking off the scab of the wound. Going all the way back ... you’re even going into the history of when blacks were treated as property.”

The tension that the killing of 17-year-old Trayvon Martin has exposed, residents and community leaders say, is not between blacks and Latinos, or blacks and whites. It’s a fresh gash in the festering rancor between the community’s blacks and its police.

Last month, though, what residents describe as a fragile peace between the city's police and the black community was shattered when, according to authorities, George Zimmerman shot and killed Martin.

So now, the city has added a link amid the idyllic images on its website -- to information about the Martin investigation. It includes an open letter from the city manager, and links to the recordings of the 911 calls that have been their own source of friction and, after their release, a source of further contention over the handling of the case.

This much is known: Zimmerman, 28, who neighbors said was “fixated on crime and focused on young, black males,” was out patrolling his gated community on the lookout for crime. He called 911 to report a “real suspicious” person “just walking around.” Zimmerman followed the person -- Martin -- despite the dispatcher’s admonition not to.

Zimmerman had a 9mm handgun. Martin had a bag of Skittles, a can of iced tea and a cellphone.

A state grand jury is being convened. The U.S. Justice Department has also stepped in to conduct its own investigation.

Police have inadvertently helped fuel the case’s racial overtones by initially describing Zimmerman simply as white. His father, however, stepped in to say that his son is, in fact, Hispanic, and not in any way a racist.

“George is a Spanish speaking minority with many black family members and friends,” Robert Zimmerman wrote in a one-page statement delivered to the Orlando Sentinel. “He would be the last to discriminate for any reason whatsoever.”

But the statement did little to quell the unrest in Sanford, where blacks account for 30 percent of the residents, Hispanics 20 percent and non-Hispanic whites 57 percent.

Members of the black community there say they see the treatment of Zimmerman as the latest in a historic string of incidents where they believe blacks have not received the same measure of justice. They recall the case of Travares McGill, shot by white security guards in 2005 -- one the son of a longtime Sanford police officer, the other a department volunteer. The guards were acquitted.

And, more recently, the 2010 beating of a black homeless man by a white teen. The beating was caught on videotape. Police waited seven weeks to arrest a suspect -- the son of a Sanford Police lieutenant.

“It’s not the first time the judgment of the police department has been put in question,” the Rev. L. Ronald Durham of Greater Friendship Baptist Church in Daytona Beach, Fla., who also has Sanford residents in his congregation, told The Huffington Post, "which indicates to me that there is, at least in the recent past there has been, a history of things not being addressed when it came to the perpetrator being Caucasian and the victim being African-American.”

Many are protesting, demanding that Zimmerman be arrested and that Police Chief Bill Lee Jr. step down. On Wednesday, the city commission gave a vote of "no confidence" to Lee.

The case has drawn national attention. Durham is working with Rev. Al Sharpton to host a rally in Sanford on Thursday in support of Martin’s family.

But community members say that the ire over Martin's death has not been directed at Latinos.

“No way. No way,” Oliver, the pastor, told The Huffington Post. Racial tension is not a problem among Sanford’s minorities, he said. “Not between blacks and Hispanics. That doesn’t even exist, I believe, to a great multitude between blacks and whites in Sanford. No.”

On that, several blacks and Hispanics in Sanford agree.

“I see it as an isolated case,” Sanford real estate agent Jose Rodriguez told The Huffington Post. “I don’t have any knowledge that there is any kind of friction between the races. No. I don’t see it.”

“We’re seeing the faith-based community come together, civic leaders come together, so I’m trying to fit in with that to let them know our support,” Vivaldi told The Huffington Post.

But the tension with the police, Sanford residents say, is very real. And the killing of Trayvon Martin has become a rallying point for the black community to insist on change.

Said Oliver, “We will not be treated as less than human beings." 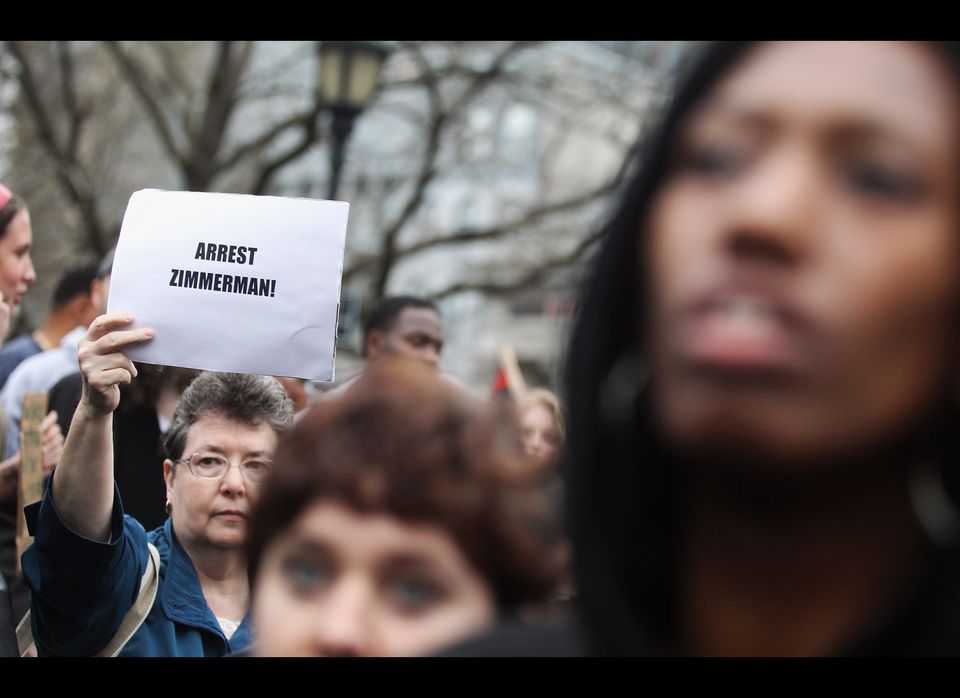 1 / 16
A Million Hoodies March Protests Death Of Trayvon Martin
NEW YORK, NY - MARCH 21: Supporters of Trayvon Martin rally in Union Square during a 'Million Hoodie March' in Manhattan on March 21, 2012 in New York City. Thousands of protesters turned out to demonstrate against the killing of the black unarmed teenager by a white neighborhood watch captain. The protesters marched through the streets after holding a large rally in Union Square. (Photo by Mario Tama/Getty Images)
Getty