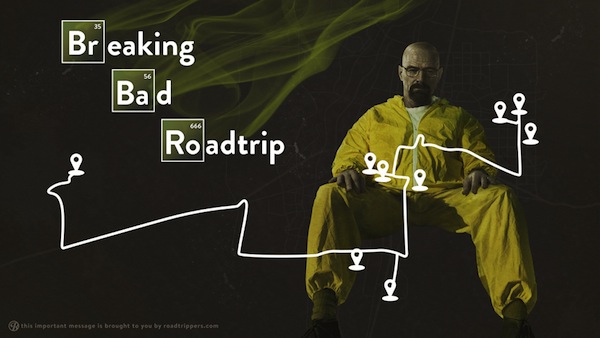 With the series finale of Breaking Bad just one heart-pounding week away, fans of the show (i.e. everyone) have been emotionally preparing for the long-awaited conclusion to Heisenberg's story. What better way to reminisce about Walter White's journey from Mr. Chips to Scarface than to follow in the steps of Heisenberg on this Breaking Bad Road Trip? Here's our guide to the most iconic Breaking Bad locations.

Generally speaking, standing outside Walter White's house and snapping pictures is probably a bad idea. In Heisenberg's Albuquerque, you would most likely find yourself dissolving in a plastic barrel, but lucky for us, it's not such a big deal in real life.

Frances Padilla had no idea what she was getting herself into when she agreed to let her home of 40 years become the fictional residence of the turbulent White family. On a monthly basis well over 400 cars, filled to the brim with BB fans, pull up to her curb and pile out just to take pictures of themselves wearing dad-sunglasses and black pork-pie hats.

The manager of this South Valley burrito joint counts between 30 to 40 fans a day who pull up in cars and cabs, sometimes straight from the airport, all of them curious to meet the real-life Gus Fring.

The popularity of Breaking Bad has been great for manager Jose La Rivera, as the fan interest in the restaurant has brought an estimated 10 percent extra profit to the joint, and loads of new customers excited to sit in the most coveted seat in the place: "Walt's Booth."

When you visit, be sure to have Jose snap your picture next to the huge Los Pollos Hermanos mural.

Because no Breaking Bad pilgrimage would be complete without a nod to Saul Goodman, we made sure to include a location where you can grab a beer and pay homage to the sleaziest lawyer in the Southwest.

Hooligans is one of the only Breaking Bad exterior locations that will be celebrating with a public finale party, so if you have no place to go on Sunday night and you're in the Albuquerque area, you've got the rare opportunity to swing by and watch it all end in a place it all began.

Nicknamed "The Crystal Palace," this location was featured pretty prominently in a musical montage that had everyone humming "Everyone Knows it's Windy" at work the next day.

If you're thinking about staying at the family-owned Crossroads Motel you might want to check some of the customer reviews.

Though the "Palace" hasn't made an appearance in recent seasons, it's such an iconic part of Breaking Bad's imagery there was no way we could leave it off our list of places to visit... just think twice about spending the night.

Breaking Bad has single-handedly turned a perfectly harmless car wash into one of the seediest places in America. While Walt and Skyler might have been using their A1A car wash to clean a whole lot of dirty cash, the real life counterpart focuses primarily on cars.

You can pull in for a wash, or just snap some photos, as it's open to the general public. Tell 'em Walt sent you.

There have been a handful of separate locations used to make up Joe's Salvage throughout the series, but only one bore witness to end of the RV: Ace Metals.

Stop by to pay your respects to the rolling meth lab and yell, "yeah, bitch! Magnets!"


Hydrofluoric acid, a dissolving body in the bathtub, and a heap of fleshy bits all over the hallway. Welcome to Jesse Pinkman's (first) home.

The location for Jesse Pinkman's fictional home changed sometime during production of the second season when the original homeowners sold the property, but if you pop over to 16th street, you can see both in one easy trip.

There might not be a superlab located deep in the basement of this laundry facility, but you can still visit the location that set the stage for so many tense moments between Heisenberg and Fring in season 4.

To'hajiilee Reservation is the perfect starting point and ending point for a Breaking Bad road trip, playing an important role in both the beginning of Walt's journey, and now the end. It was the first place he and Jesse parked the rolling meth lab, and to spare any spoilers for those not caught up, was prominently featured at the climax of the series.

Formerly known as the Canoncito Reservation, To'hajiilee is a section of the Navajo Nation between three of New Mexico's southwestern counties. The dry, rocky terrain of the reservation invokes feelings of ruin and isolation, and yet at the very same time there is a kind of beauty to it.

It's also worth noting that there are very few "cow houses" in this area.

Though production of the series has long been complete, the effect of Breaking Bad's success on Albuquerque is obvious everywhere you look. Bakeries selling blue meth donuts, packets of crystal-blue rock sugar, and even a beauty salon selling a "Bathing Bad" line of bath salts are just a few of the local Heisenberg-themed attractions you can find while exploring the city.

For a place that was mostly known for it's annual Balloon Fiesta, the dark and violent nature of the series hasn't stopped Albuquerque, or it's residents, from embracing all the attention Breaking Bad has brought to the city whole-heartedly.

With just one week to go until Heisenberg meets his inevitable end, no matter how unpredictable it may be, it's safe to say that Walter White's legacy will live on in Albuquerque for years to come. Not in the crystal blue meth made popular in Breaking Bad, but in the pilgrimages taken by fans to see the sights and sounds that helped make Vince Gilligan's series the best television show in history.