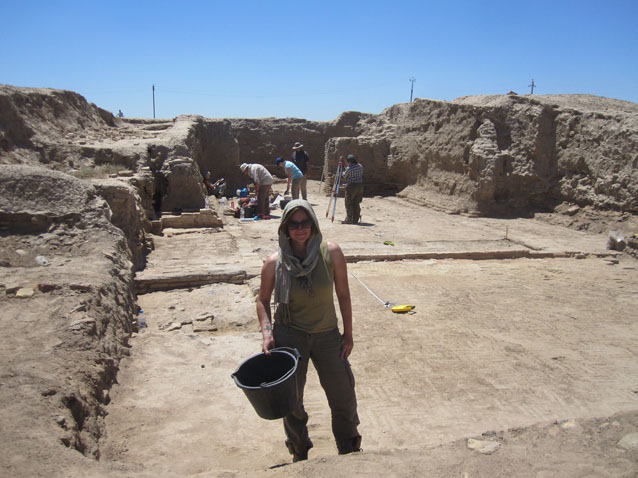 J-Lo isn't the only one who went to Turkmenistan this summer. I was there too -- but unlike J-Lo, I didn't walk away a million dollars richer. But I did uncover something in the desert far more valuable -- and priceless -- than any sum of money.

While much has been written about J-Lo's recent decision to perform for the President of Turkmenistan's birthday, I'd like to present a different side of Turkmenistan -- by highlighting my work there this summer, and focusing on what Turkmenistan is doing right in preserving its Islamic heritage.

Over the past several years, as Sufi shrines have come under widespread attack in Mali, Egypt, Libya, Tunisia, Pakistan, and Kashmir, Turkmenistan has been actively embracing, preserving, and promoting its Sufi heritage. To help with this commendable effort, I joined up with colleagues from around the world -- braving snakes and sunstroke -- to excavate Islamic archaeology and preserve Sufi shrines in Merv -- a remote jewel on the Silk Road.

In the 12th century, the oasis of Merv, along with Baghdad, Cairo and Damascus, was one of the most important centers of Islam -- when it served as the eastern capital of the great Seljuk Empire, and was referred to in Persian as "Shah-i jan" -- "the soul of the king."

Today, Merv is a treasure trove of religious history -- as I was reminded each day, while tripping over the remains of a Buddhist stupa (where a Zoroastrian vase was found), photographing early Christian crosses, and documenting prayer ribbons at Sufi shrines -- a ritual carried over from the country's shamanistic past. 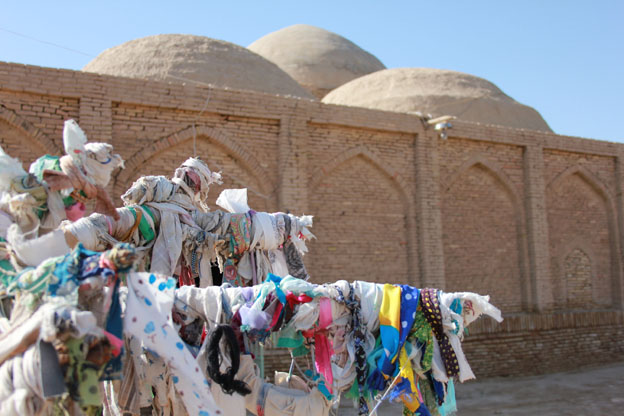 Each morning, as I evaluated the state of each shrine, I was surrounded by hundreds of pairs of wishing stones, leaning up against one another -- like hands, praying. Walking through those tangible wishes, I wondered how many of them had come true. 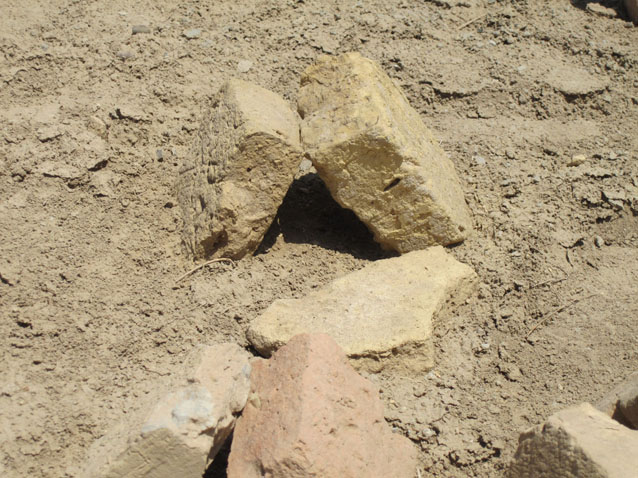 Each time a religious pilgrim made a wish and set some stones, the anthropologist in me delighted in witnessing this ritual remnant of the country's shamanistic past -- but the archaeologist in me had to lament, since these prayer stones were being pulled from the very Sufi shrines we were trying to conserve.

My treasure seeking began not in the shrines but in the trench, where I was excavating a corner of the medieval Islamic bazaar -- next to the shrine of Sultan Sanjar. But what started out as a simple square cut filled with sand and stones -- including one in the shape of a heart -- quickly became what seemed like an endless pit. 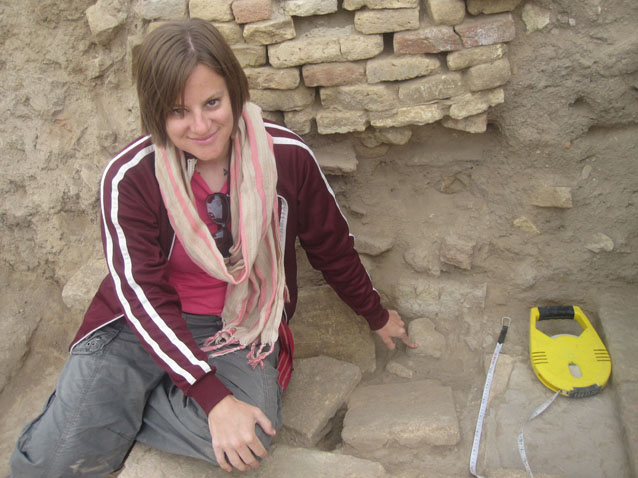 "Don't fall in head first," our director said each day, as I hacked away.

Though I started out tentative in my troweling (wary of destroying walls), I gradually became as ruthless as the Mongols -- who, when they destroyed Merv's walls in 1221, slaughtered the whole population, burned the books and destroyed the dam.

While I was digging, I remembered a verse written by Rumi, when he himself was on the Silk Road: "Where there is ruin, there is hope for a treasure." Sadly, treasure was eluding me -- but not my colleagues. One of them had uncovered an upside-down turquoise bowl hidden under the debris of the Mongol mayhem.

"Why wasn't I finding a turquoise treasure like that?" I wondered each day.

Though I was feeling as empty and dark as my ancient abyss, my self-pity gradually transformed into a resigned acceptance -- and I relinquished all hopes of finding something shiny.

"I guess I'm just not meant to find treasure," I said to my yurt buddy each night.

And each day, as I excavated smalls finds -- an iron knife, chunks of pottery, bits of bone -- my mind wandered far from the Islamic bazaar, far from my former dreams of treasure. I started planning a poetry festival for my yurt -- and even spent time thinking fondly of Freud, whose theories of the subconscious were formed by his own archaeological obsession and Egyptian collection. 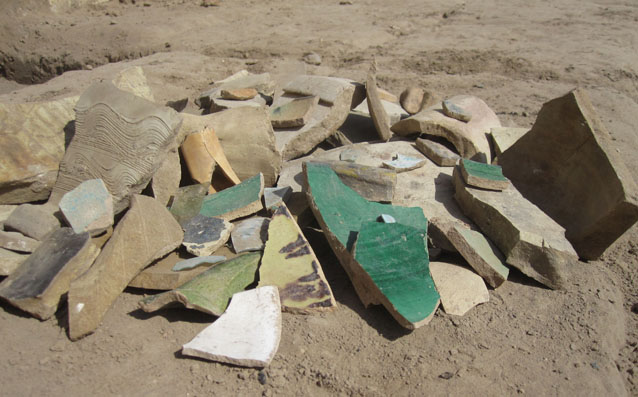 "Oh my God," I said, when my trowel finally hit upon a floor.

It turned out my pit wasn't bottomless after all. And, as I would soon discover, I hadn't hit upon a floor -- but a series of floors -- one stacked upon the other. I was finally back to standing on solid ground.

It wasn't until the penultimate day of our excavation that my trowel hit upon something shiny. While I was carefully brushing its edge, the color of turquoise glaze began to emerge from the sand -- and from history. Wedged in the wall, was a medieval turquoise Islamic lamp. But I didn't bother conjuring up any wishes for the genie inside, since my wish had just come true.

"Alright, day's over -- cover up your finds," our director said, seconds later.

But wait -- I needed more time to take it out of the wall. How could I leave such a treasure behind -- with only a thin layer of sand protecting it? How could I trust that no one would steal it? 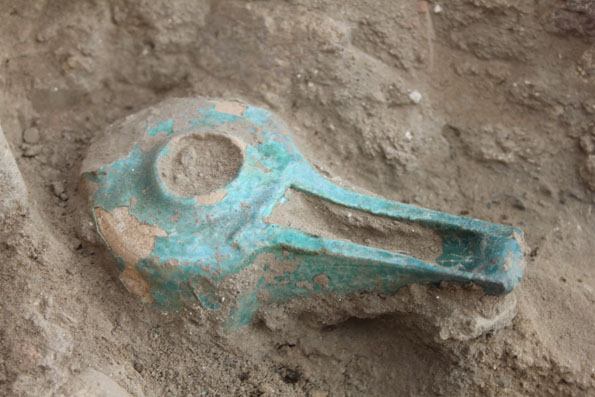 "Don't worry -- you can excavate it tomorrow," the director said, as I begrudgingly began to bury it. Though my wish of finding turquoise treasure had come true, I was going to have wait another day to hold it in my hands.

That night, while trying to fall asleep in my yurt, I couldn't stop thinking about the lamp. Who had held it centuries ago in their hands? What rooms had it lit? What stories could it tell?

When the time came the next day to pull it from the wall, I was praying the latern wouldn't break into pieces -- like my colleague's bowl had the week before. But since the lantern was balanced on another piece of pottery beneath it, I was able to smoothly slide it out of the wall intact.

Though tempted to scream with excitement, I bit my lip and stayed silent, as I cupped it in my hands. I was all too aware of the danger in showing off one's treasure -- no matter how happy or proud one might be. 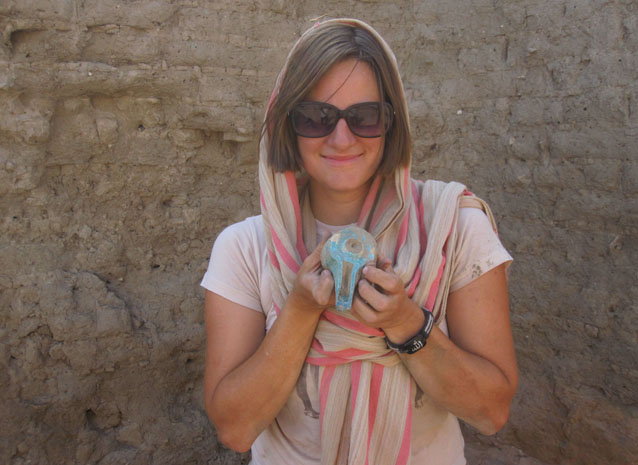 "That's quite a find," the British ambassador said, admiring the lamp when he visited the trench later that day.

As the conservators moved in to clean and conserve the lamp, I said my good-byes. Watching the lamp be packed up and brought to the museum, I realized that the greatest reward for me this summer in Turkmenistan wasn't the lamp at all. I had been foolish to seek treasure with such strong desire. And I had been wrong to covet the treasure of a friend. Worst of all, I had forgotten that all treasures which come must eventually go -- just like our desires.

In the end, though, I did leave Turkmenistan with some priceless treasure -- just of a different kind. In the words of Rumi: "You are searching the world for treasure, but the real treasure is yourself."