Most financial markets are only slowly getting worried about the possibility of a U.S. debt default, but in one tiny corner of the bond market things are starting to look a little panicky.

Investors on Tuesday dumped one-month Treasury bills due for payment after October 17, the date the Treasury Department has warned it will no longer have the cash to pay all of its obligations unless Congress raises its borrowing limit, known as the debt ceiling. Every day that passes after that date raises the risk the government will default on some of its debt. These short-term bills will probably be the first to go unpaid.

As you can see in the following chart from bond-market tracker Tradeweb, Tuesday's selloff drove interest rates on these 1-month bills to higher levels even than during the August 2011 debt-ceiling crisis, which resulted in the U.S. government losing its "AAA" credit rating. T-bill rates are the highest since the Lehman Brothers collapse in the fall of 2008. (Story continues after chart.) 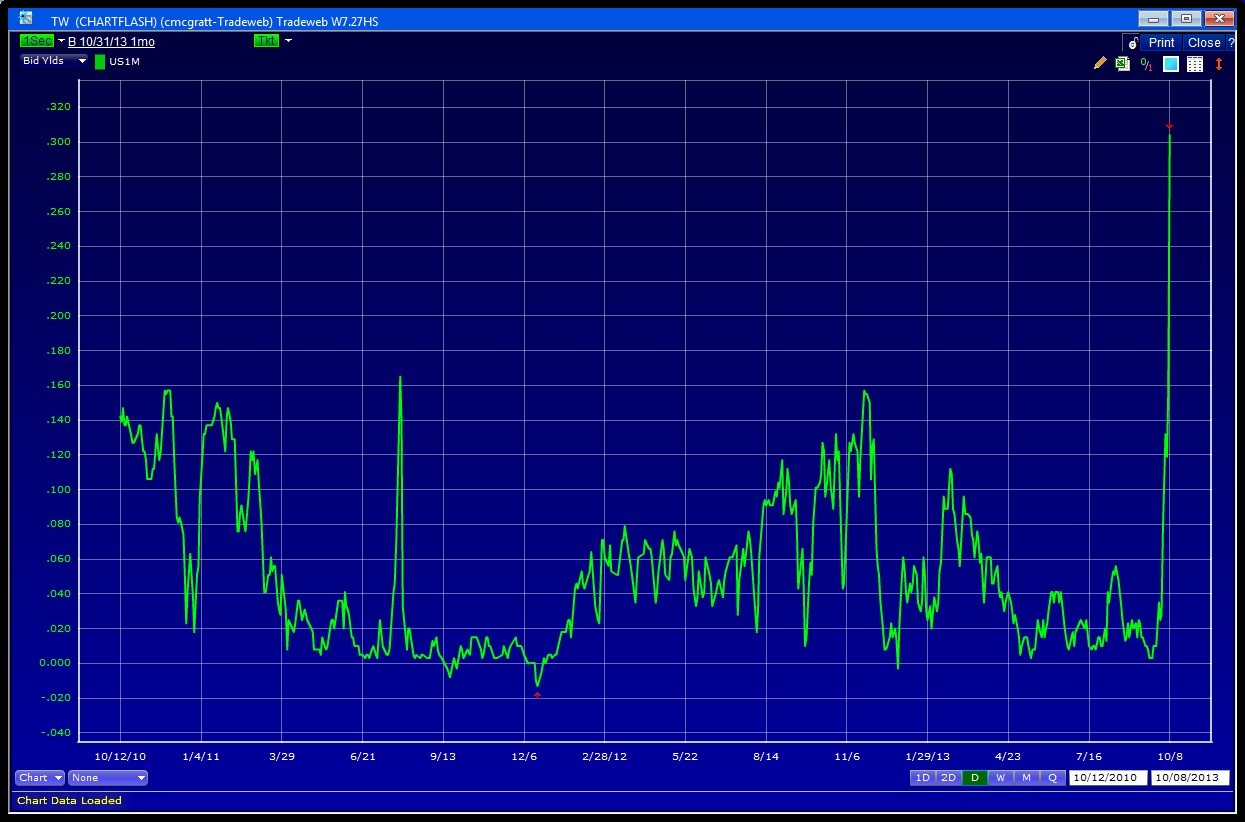 Interest rates and bond prices move in opposite directions. When investors have less of an appetite for Treasury debt, the U.S. government has to pay higher interest to attract them. Already money-market funds, which traffic in short-term debt and took a beating during the Lehman crisis, are avoiding some U.S. Treasury debt, Reuters reports. That means U.S. borrowing costs go up.

Let's repeat that: As a result of House Republicans holding the U.S. debt ceiling hostage because of "spending" or "Obamacare" or "disrespect" or whatever their reason du jour, the U.S. government's debt situation will get worse. As a result of this spike in rates, the government is paying more to borrow for one month than it does to pay for one year, a freak occurrence.

We need to keep this scary chart in perspective. This selloff is mainly affecting T-bills that mature in the next month or so. Bills that come due later in November are behaving normally: Markets, in other words, are expecting Congress to come to its senses fairly soon.

Rates on bills are still nowhere near where they were before the Lehman crisis -- even with Tuesday's spike, the government was paying a little more than 0.3 percent to borrow for a month, compared with about 1.6 percent at the time of Lehman's bankruptcy. The markets obviously do not yet see this as a Lehman-like event. Give them time!