If you're a frequent borrower of money, for stuff like education and cars and lip implants, you might think that low interest rates are good. But be warned: Sometimes they're not all that good.

Take right now, for instance. Interest rates are low, and they keep getting lower. Rock on, you might be thinking, more lip implants.

But falling interest rates are bad if they mean that you are about to lose your job. And occasionally that is what they mean.

That's what they meant during the financial crisis and Great Recession, when rates fell to record lows and everybody lost their jobs. That's probably not what falling rates mean right now. But they do give us reason to worry a little bit.

Here's what happens: Investors see the end of the world coming, so they frantically dump all their risky investments like stocks and barrels of oil and Russian bonds, and instead scramble for "safe" investments like bonds issued by the U.S. government.

When investors buy those U.S. Treasury bonds, that makes the interest rate on those bonds fall. Because bond-market math, that's why. And then that interest rate drags down other rates throughout the economy, such as mortgage rates.

Low interest rates don't themselves kill jobs, of course. But sometimes the stuff that investors are freaking out about -- a looming recession, for example -- does kill jobs. So low rates are sometimes a harbinger of bad times.

Here is a chart, from Yahoo Finance, showing what has been happening to U.S. Treasury interest rates lately: 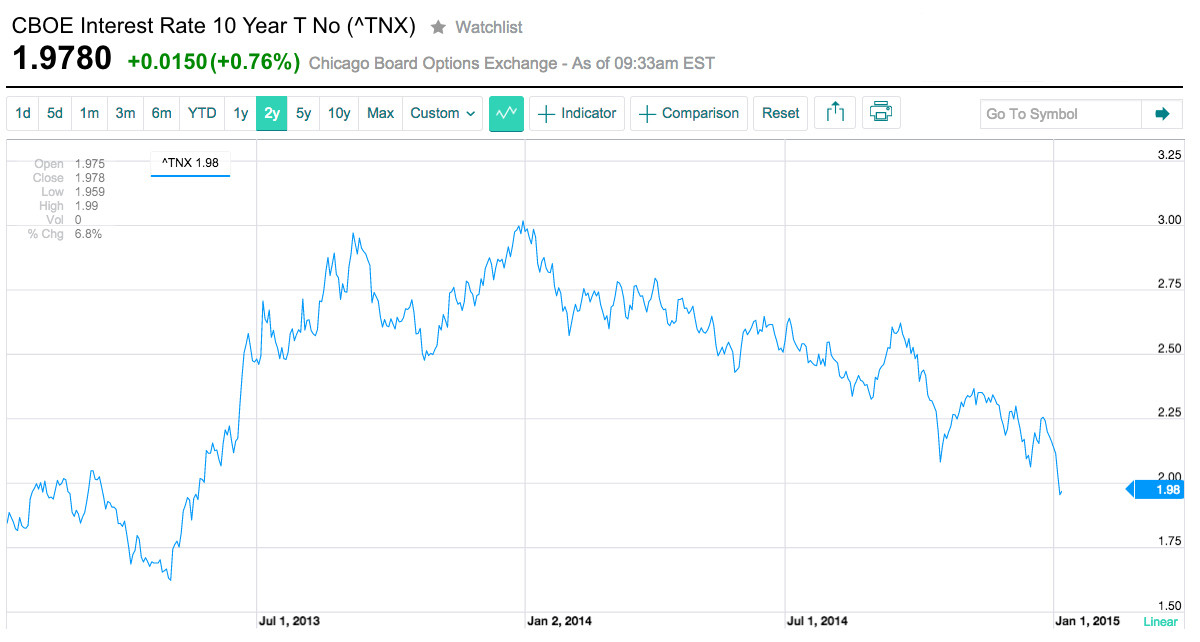 This is the interest rate the U.S. government pays to borrow money for 10 years, to pay for things like wars and battleships and lip implants. As you can see, that rate has been getting lower for a while, and recently took a little swan dive below 2 percent. Rock on, you might be thinking, more wars. And more houses -- mortgage rates are tumbling, too, along with government bond rates, The Wall Street Journal noted on Wednesday.

But these rates are falling because investors are freaking out again, as Peter Eavis pointed out in The New York Times on Tuesday. Investors see the European economy in the dumper and worry. They see Greece getting ready to leave the euro and worry. They see China maybe on the edge of a financial crisis and worry. They see oil prices collapsing -- good news for consumers, but bad news for oil companies, and maybe a bad sign for global economic growth -- and worry.

So how much should you personally be worried about this? For now, not much. As you can also see from the chart, interest rates do tend to swoon from time to time without the world ending. And the U.S. economy finally seems to be up and running, with strong growth and a lot of new jobs. Low rates and cheap oil will help consumers.

Yet perpetually low rates are a sign that demand is still not all that strong. They suggest the economy can't stand on its own feet. They mean the economy could be vulnerable to a shock.

The Federal Reserve, for one, really, really, really wants to raise its own key short-term interest rate from zero, where it has been sitting for about the past six years. The Fed has been gearing up to raise rates this year, but might have to hold off given all the agita in markets right now.

The persistently low rate means the Fed won't be able to use its key policy medicine -- cutting interest rates -- in the next recession.

While low interest rates may not be cause for major concern yet, it would be better in the long run to see rates rising, because that would signify a strong economy and healthy demand for borrowing for cars and houses and wars.