The Treasury Department may be in the midst of one of the greatest challenges in its history but it won't be canceling its annual holiday party.

The Department has sent out invitations to the December 11, 2008 gala, which will feature Secretary Hank Paulson and his deputy Robert Kimmitt. 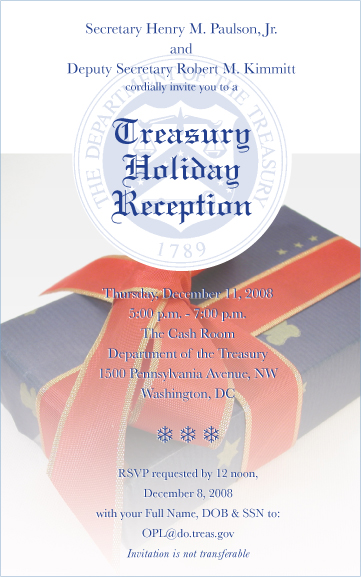 It would be soulless to criticize Treasury for indulging in a bit of Holiday cheer. And the fact that they are hosting the event at the department's D.C. headquarters suggests this won't be a blowout affair.

But the fact that they chose to host the party in the "Cash Room" is either an overt attempt at contemporary humor or a subconscious-influenced coincidence. Either way, it's ironic. The Treasury may end up spending over a trillion taxpayer dollars in an effort to save the financial markets from massive chaos. Right now, word is getting out that Paulson wants the second ($350 billion) half of the Troubled Assets Relief Program money. Congress, however, isn't exactly keen about forking over the cash.