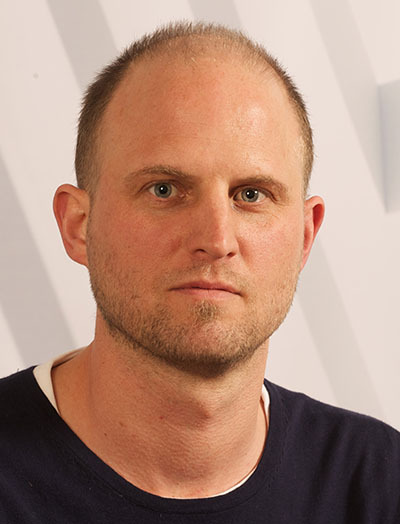 Jonathan Delafield-Butt is a neurobiologist and developmental psychologist at the University of Strathclyde in Scotland who thinks the current theory of evolution needs to be far more nuanced to include, in particular, how biological form and function are transmitted across generations, as well as psychological aspects like feelings. One of Delafield-Butt's interests is "development of children's agency and its origins evident in intentional movements before birth."

Jonathan Delafield-Butt is a Lecturer in Early Years at Strathclyde. His BSc (with honors) is in medical chemistry from the University of Leeds, his MSc in neuroscience and PhD in developmental neurobiology are both from the University of Edinburgh. We spoke recently by phone about the causes of autism and the possibilities for intervening prenatally. Excerpts of our conversation follow.

Suzan Mazur: You co-authored an excellent paper called "Autism as a developmental disorder in intentional movement and affective engagement." You've noted that the abnormalities have been found in brain stem systems and the cerebellum in the early fetal stage -- before the cerebral neocortex is functional. How many weeks would you say that is?

Jonathan Delafield-Butt: To pinpoint it is difficult because we can only see the results of the developmental process at birth or in childhood, when in very rare cases you get early child death. If we have the histology, that can give very fine neural sections. You can look at the aberrations and differences. But all the data certainly seems to point to the fetal stages and possibly embryogenesis -- possibly. It's speculative. We don't know.

Suzan Mazur: You describe brilliantly how the fetus is actively moving around in the uterus, feeling itself and its environment, tasting, drinking amniotic fluid, etc., showing emotion. Is the motor disorder noticeable in this fetal stage?

Jonathan Delafield-Butt: It ought to be but we don't know yet. It's noticeable at birth, therefore, it stands to reason that you ought to be able to detect it in the months or the weeks leading up to birth.

Suzan Mazur: So it's not visible in the sonograms or advanced sonograms. Is there any kind of equipment, any kind of technology that's in the pipeline that will enable you to see more closely what the motor development is like?

Jonathan Delafield-Butt: This would be great. You'd need very high resolution, spatiotemporal resolution of the sonography in order to detect the differences in motor behavior and to get that is quite difficult. You can have 2D, which is very fast, and could get a refresh rate of 40 frames per second. That's good, but you miss a lot of the organism because you're just slicing through it. One way of doing this is to use robotics to hold the ultrasound wand and track the fetal movements. This is being developed, but not specifically for autism research, though it could potentially be of benefit.

There's a little bit of work with 4D ultrasound. With that you can get refresh rates of about 10 frames per second, so the movement resolution is very clunky. And there are people working on this but I don't think they're looking at autism specifically.

Most of the studies are after birth. You look at the at-risk children -- you find the brother or sister of the autistic child -- and then you can perform fairly detailed observations during early infancy. But it's still after birth.

Suzan Mazur: The siblings may also have some signs of autism?

Jonathan Delafield-Butt: Siblings of children with autism have a higher chance of having autism themselves.

Suzan Mazur: If you had the technology enabling you to take a very high resolution look at the fetus during development, is it conceivable that you could give the fetus a kind of physical therapy? Could such intervention at this more plastic stage be helpful?

Jonathan Delafield-Butt: Possibly, yes. This is looking pretty far into the future. But if we could get the behavior data by improving ultrasonogram techniques, using whatever technology, and we're able to detect the differences -- then motor therapy might be possible. But it would take some serious work as to how to do that. At the moment we're thinking about doing this with children, children maybe as young as 2½. But theoretically, yes, it's possible.

Suzan Mazur: Would that prenatal physical therapy have any effect on the developing brain itself? Or would it just be muscle memory the fetus would have as a result of the intervention?

For the kinds of movement that adults produce, physical therapy can have quite a dramatic effect on brain structure, certainly within the cortex. One of the important pieces of data in this area is, for example, a wonderful study of adults balancing on a balancing board. It demonstrates that even balancing on a balancing board for 20 minutes can affect the brain structure of certain cortical areas. So the point is that even very, very simple motor activity can affect the brain structure. Over a period of weeks that becomes more exaggerated. So the idea that motor behavior or movement translates into a particular neurological structure I think is very clear.

The question is, well does that principle translate to someone as young as a developing fetus? On top of that is, will the structural changes be felt, will they be active in the brain stem tissue -- where we think the earliest differences arise -- as they are in adult cortical tissue?

Suzan Mazur: What is your best guess as to how autism occurs?

Jonathan Delafield-Butt: Going back to the paper I wrote with Colwyn Trevarthen that you cited, we do think it's a sensory-motor and affective disorder. . .

[T]he brain stem nuclei that control the timing of movement and also sensory information needed to guide movement are closely associated, in physical proximity with the area responsible for social regulation. So if there was a growth error, a disturbance in the developmental network within the brain stem during embryogenesis or through fetal life, then it's likely that not only will the sensory motor nucleus be disturbed but also the social engagement nuclei and that could produce a compounded effect.

Suzan Mazur: It's hereditary and environmental.

Jonathan Delafield-Butt: It often can come from a combination of factors. For healthy development, the system requires a healthy genotype, first of all. It also requires a healthy environment. It requires a healthy maintenance of that environment. Disturbances in any of these areas -- maternal stress produces certain hormones which alter the physical or chemical environment of the embryo, or if you have a genetic precondition . . . then you're altering the system again. If there's a viral infection, then again you're introducing more risk factors.

Each risk contributes to stress on the developmental system. If you have a weak point, speculatively in these brain stem nuclei, then you're going to create a heightened possibility that the development is disturbed either in anatomical arrangement or in the cell composition.

You can have a healthy germline and the environmental effects can still create these abnormalities. In development, even given the best conditions, you can produce abnormalities. There are certain weak spots in embryogenesis, for example, fusion of the anterior midline is a common one. . . .

Suzan Mazur: About 1% of the population has now been swept into the autism spectrum--

Suzan Mazur: --including Asperger's. Are we placing too much value on social interaction, the need to fit in? James Simons whose Simons Foundation has given $100 million to autism research, commented to me:

"It takes a certain talent to wall oneself off for a while, to mentally isolate."

Are we discouraging "genius" in our efforts to give everyone that sort of kumbaya experience?