I love political cartoons. The good ones depend on the reader being intelligent and well read. The more you know and the harder you look at the details, the funnier the cartoon gets. It's wonderful to have art with humor that doesn't talk down to its audience. Whether you agree or disagree, your reaction helps you define your stance on current events. I've always thought it'd be fun to create a film in the style of a political cartoon.

In January 2012, my friend America Young e-mailed me some very basic dialogue for what would become Electoral Emissions, the short film embedded in this blog, which I encourage you to watch before reading the rest of this post.

America wanted to know what I thought of her developing script, which started with a conversation she had had with her mother.

America: One common theme I hear from people attacking Obama is how much money he's spending and that we aren't out of debt yet. True, he did promise to fix us up in four years, which was not realistic, but he was handed something that was broken. It takes money to fix something that is broken. I was talking with my mom about this and she pointed out, if you wreck a car, you have to pay to get it back to working condition. Which then got my mind going. I came up with the scenario of a woman getting her car back from the valet and it being wrecked but the mechanic is the one who gets yelled at, by the valet, for charging money to fix his mistake. It was amazing how easily the metaphor worked for this particular defense of Obama.

What I loved about America's idea of the Valet vs. the Mechanic was that it was like one gigantic moving political cartoon. As we layered in visual details and incorporated the thoughts of our brilliant and opinionated actors, Justin Welborn and Joe Holt, the funnier and more interesting it got.

America's premise also provided a chance to not talk down to an audience. I'm not a huge fan of impersonators showing off how good they are or having actors pause to wink at the audience to make sure they got the joke. I liked that the script was flexible enough for us to layer in the humor and commentary for the audience to find on their own.

As a viewer, you may agree or disagree with our stance, you might interpret this short film differently than we intended, or you might decide it's just the same old political rhetoric and start calling us a bunch of idiots. Honestly, I'm okay with all of those responses. As with a good political cartoon, America and I simply want Electoral Emissions to provoke a reaction, to make you think about your personal political stance, and ideally inspire you to dig into your choices a little more deeply. 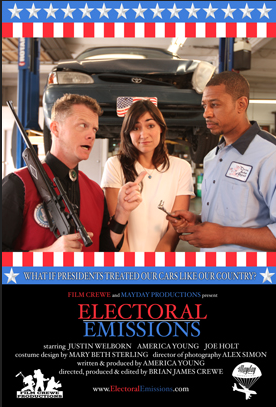