As I sat in the spa sipping a pisco sour, I looked down the valley to the huge, snow covered monolith at the end. Mt. Salkantay, the highest peak in the region, would loom over us for the next two days as we worked our way up and over the pass that bears its name. I could barely make out the trail as it snaked down the valley. It didn't look so tough, I thought, then reminded myself that was only the beginning. 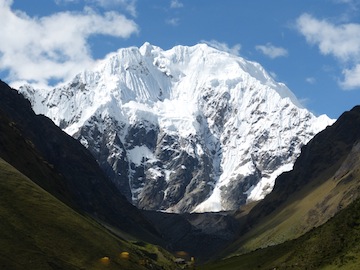 At 15,213 feet, Salkantay Pass would be the highest I had ever been without the aid of an airplane or mind-altering substances. That we would start from an elevation of 12,690 feet and head steadily up from there didn't make me feel any better. But that was tomorrow. Right now I had a hot, churning spa to melt into and a pisco sour to drink.

I was in the Andes for the six day Mountain Lodges of Peru lodge-to-lodge trek. The first day had been comparatively easy -- a two mile hike to the first lodge. On the second day we hiked four miles round trip up 1,100 feet to Humantay Lake nestled above the lodge in a cirque surrounded by serrated peaks. The guides called it an acclimatization hike, but it was soon clear that the real purpose was to identify those who would be better off riding a horse through the pass. Two people out of our group of 10 wisely chose this option. 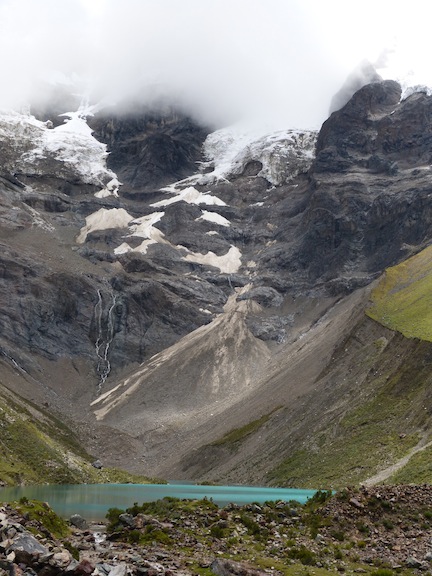 The third day was the big day -- a butt-searing, heart-pounding, lung-screaming five hour, 2500 feet plus high altitude climb to Salkantay Pass. As I got close to the pass my heart beat so fast I was afraid my chest would explode. The last 600 feet of elevation gain took about an hour and may have been the most physically demanding hour of my adult life. All I could think about was a helicopter rescue. But I made it, to the accompaniment of cheers from those in our group who had beaten me to the top. 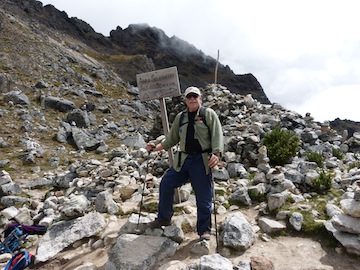 From there it was downhill (2,400 feet in four miles) on a muddy trail littered with rocks and stones to the next lodge. My knees burned on the descent. But when we got to the lodge we were greeted with cold towels, hot tea and an even hotter spa. And of course there were pisco sours and cold beer.

That was our routine for the next couple of days, a long challenging hike ending at a simple but attractive lodge with comfortable beds and private baths. The meals were excellent, prepared by a chef who preceded us from lodge to lodge with fresh ingredients picked up from local farmers along the way.

The last day of the trip was almost as challenging as "the big day." First we climbed almost 2000 feet in 3 miles on a segment of the Inca Trail. Then we descended over 3000' in 4 miles on a steep, narrow, rocky trail to a railroad station for the train to Aguas Calientes, the closest town to Machu Picchu.

From there on it was easy. After spending the night at the award-winning Inkaterra Machu Picchu Pueblo Hotel a bus took us up the mountain to Machu Picchu -- in my opinion one of the most impressive of the seven man-made Wonders of the World. But that is the subject for another story.

Besides Machu Picchu and the physical challenge of the hike, it's the spectacular scenery that makes this trip so special. Huge domed massifs and sheer, jagged peaks loom over lush forests and broad valleys. The air is so clear you can almost make out every crease and crevice in the snow and ice that cover them. 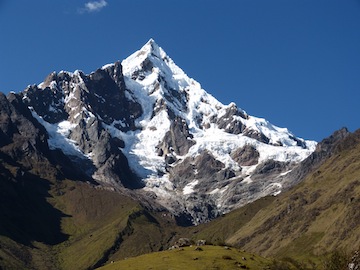 But what transforms the scenery from merely beautiful to stunning are the clouds and mist. Clouds settle over mountains and hide them from view, then lift for a few minutes to reveal peaks turned gold in the sun. Fingers of mist creep into valleys, then melt into sunshine. The clouds and mist change the character of the place from moment to moment, transforming a breathtaking landscape into something even more dynamic, mysterious and dramatic. 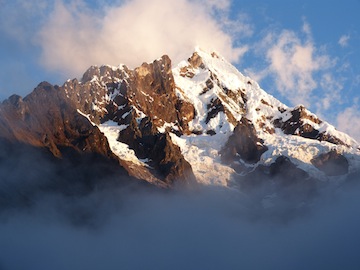 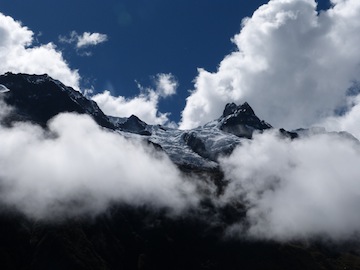 For more photos and information, check out Don's blog, the Adventure Geezer, on his website.