Will a Trump Party and a Sanders Party emerge after the elections?

The ever-widening gap between the Trump campaign and traditional Republican leadership point to the strong possibility that the Republican Party will be split into at least two parties following the 2016 election in November.

According to an October 9 Politico/Morning Consult poll, 74 percent said the party should continue to support Donald Trump despite the video that emerged over the weekend showing his abhorrent behavior toward woman. However, Republican party leaders continue to distance themselves from Trump, including House Speaker Paul Ryan who will no longer defend or campaign for his party's candidate. While Ryan stopped short of pulling his endorsement, his position points to the widening gap between Trump and many Republican leaders. Of note, Trump would appear to have more support than traditional Republicans.

On the Democratic side, it appears that the Clinton campaign is largely being supported by followers of Bernie Sanders, although this is likely more of an anti-Trump response rather than an endorsement for Clinton. Sanders' formation of a progressive non-profit points to the obvious continuation of his efforts to push for a progressive agenda in Washington that could lead to a new progressive party. Hillary Clinton's trust issues also underline the possibility of a Democratic breakup if she remains the party leader.

"This would give the presidential choice to a multi-party House of Representatives, requiring the selection of a coalition president."

However, taking these poll numbers, splitting the two major parties in two, and doing some back-of-the-napkin math provides some thought-provoking results.

Assuming the Democrats would split into a Clinton party and a Sanders party, and using the vote split at the Democratic National Convention as a way to divide Clinton's recent 46 percent poll numbers with Sanders (Clinton received 60 percent and Sanders 39 percent at the convention) would give Clinton support from 28 percent of the electorate and Sanders 18 percent).

Likewise, assuming that Trump's 35 percent total in the October 9 poll represented most Republicans and that Trump would retain 74 percent support of the electorate (according to the Politico/Morning Consult Poll), then a Trump-led party would have support from 26 percent of the electorate and a traditional Republican party led by someone like Paul Ryan would have nine percent. The following table would reflect, in rough form, the six-party representation that might emerge in the new year. 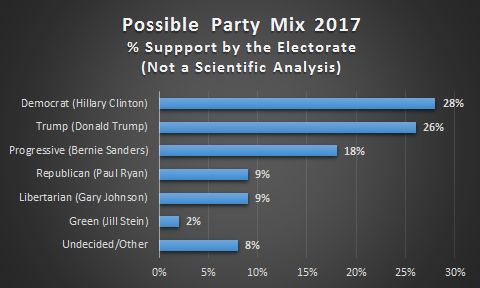 One could imagine that, as a practical matter, Trump's support would likely fall closer to the Sanders numbers (18%) and the traditional Republican percentages to take up that slack and be closer to the Democratic numbers (28%). In any case, the stage has been set for a dramatic change that might emerge to satisfy the country's political factions.

If Congressional representation after the 2018 election mirrored the numbers above, then a secondary outcome would be the creation of a multi-party Congress. This would make the 2018 election one of the most important mid-term contests in recent history as multiple parties jockeyed for seats. If these new parties emerged, it is unlikely any presidential candidate would receive the 270 votes necessary to win in the 2020 election. This would send the presidential choice to a multi-party House of Representatives, requiring the selection of a coalition president.

While some pundits will say this breakup and reconfiguration of the political system is unlikely, one cannot underestimate the anti-establishment mood of both the Trump and Sanders supporters. Each of those will have to be satisfied, and it is unlikely the traditional parties will be able to satisfy these new factions and their respective traditional bases as we move into the new year.