Sara Blakely, founder & CEO of Spanx, proclaimed in her Giving Pledge letter, "I am committed to the belief that we would all be in a much better place if half the human race (women) were empowered to prosper, invent, be educated, start their own businesses, run for office-essentially be given the chance to soar! I pledge to invest in women because I believe it offers one of the greatest returns on investment."

With these powerful words, Blakley galvanized a top spot on the list of global leaders in philanthropy. Not only did she give us shapewear for every season, but she also declared as truth what so many women across the globe know intuitively but don't have a megaphone to champion: When we donate to nonprofit organizations that lift up women, we can be assured that our philanthropic investments will generate dividends for entire communities.

And now, as a result of new research from the Women's Philanthropy Institute at the Indiana University Lilly Family School of Philanthropy, we have empirical evidence to better understand why women invest in women. This research also offers inspiration for emerging and seasoned philanthropists alike with examples of compelling projects that are moving the meter for women and girls, both in the United States and around the world.

The research, Giving to Women and Girls: Who Gives and Why, is the first empirical study to systematically analyze this trend among individual donors. The findings show that nearly 50 percent of female donors support causes for women and girls and -- noteworthy -- 40 percent of male donors also support these causes. Increasing age and income levels are the most likely determinants of giving to women's and girls' causes; other control variables do not affect giving to a similar extent. 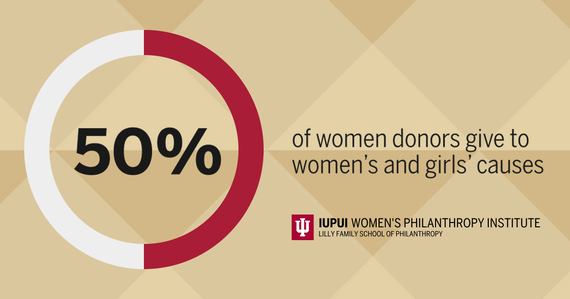 It is as important to understand who gives to various philanthropic causes as it is to understand what motivates and discourages these donors. To this end, three research findings from Giving to Women and Girls: Who Gives and Why are key:

Advertisement
One need not look far to see these research findings come to life in game-changing grants in support of women and girls. The Bill & Melinda Gates Foundation
announced that they will invest $80 million to close the gender gap
and help accelerate progress for women and girls globally. Also this spring, Jennifer and Peter Buffett of the NoVo Foundation
launched a seven-year, $90 million initiative to address structural inequalities facing girls and young women of color
in the United States. Last November, 28 women's funds from across the nation collaborated to launch
Prosperity Together,
a $100 million effort that focuses on economic security for low-income women and their families.

Women now control 30 percent of global wealth, around $39.6 trillion -- up from 25 percent held five years ago. Female entrepreneurs in the United States accounted for 36 percent of all businesses in 2012 and those numbers continue to rise. What's more, as women's wealth and business ownership increase, as well as women's inheritance from parents and spouses, so does women's giving -- individually and collectively.

The women -- and men -- who are doubling down on their philanthropic investments in nonprofits that lift up women have high hopes that these investments will lead to healthier families, communities and nations across the globe. With stakes this high, this research suggests a path for all of us to follow -- a path toward a world in which both boys and girls may live to their fullest potential.