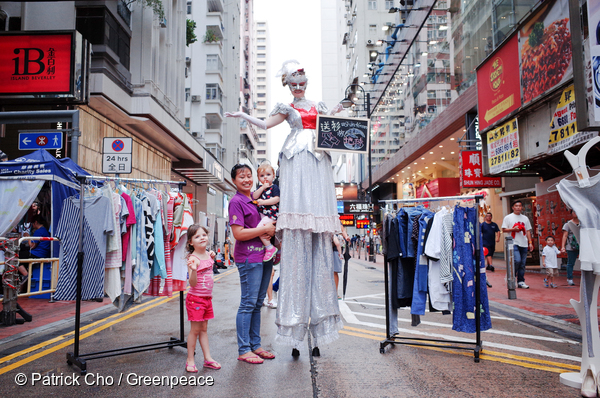 A pop up store opened by Greenpeace in Hong Kong gives away used clothes to the public for free, demonstrating shopping alternatives like swapping and second hand.

Being a fashion victim used to be cute. It's not anymore, because our textile waste is slowly killing the planet.

In a bold move to tackle the throwaway-culture in our contemporary consumer society, Sweden's ruling Socialist Democrats and Green Party coalition has announced its plans to reduce taxes on the repair of clothes and other items to promote on-going use over time.

The low cost of fast fashion has made the costs for repairing and mending comparatively too high, encouraging people to treat their clothes as disposable items and throw them away, instead of valuing and looking after them.

A 2015 survey by Greenpeace Germany showed that even though people have clothes in abundance, when seams and heels break they prefer to buy new stuff instead of getting it repaired, because it´s cheap and easy.

In Germany, half the population has never been to a tailor, while more than half of 18 to 29 year olds have never visited a shoemaker. Germans go through their clothes quickly, particularly shoes, with one in eight wearing shoes for less than a year. The picture is the same in many advanced consumer societies: in Hong Kong 1400 T-Shirts are thrown away every single minute. This has massive consequences for the environment.

Scientific research shows that advertising and the e-commerce strategies of fashion retailers are significantly contributing to this throw-away-mentality. There are a plethora of marketing and pricing tricks to encourage us to buy more new stuff - fast fashion companies are speeding up trends, shortening seasons and tempting shoppers with "bargain deals" on controversial shopping bonanza days such as Singles Day in China, Black Friday in the US and Europe, or Cyber Monday from online retailers such as the giant Amazon. And now, as people increasingly buy online, the barrier to purchasing new clothes is lowered even further: everything is just one click away. Clothes shopping has become an addictive activity, needing is replaced by wanting.

In a materialistic world dominated by messages from an impressive billion dollar ad industry, more sustainable alternatives such as eco and fair trade fashion, second hand buying, swapping, repairing or upcycling are less visible and are not popular with the public. This is something that Greenpeace's Detox my Fashion Campaign wants to change - by helping these more creative ways of dressing ourselves become more widespread and well-known.

The survey in Germany also showed that consumers are actually fed up with throwing their garments away so quickly. Nearly half of them would like to have guarantees for their clothing. It is up to the industry to facilitate this change by offering quality instead of quantity as well as free repair services. Smaller brands such as the outdoor brand Patagonia or the Swedish denim producer Nudie have already put repair and longevity at the centre of their business models.

The reality of planetary boundaries sets limits on production and consumption. It also obliges all industries to experiment, look into and develop alternatives to the throw-away model. Even the fashion industry increasingly acknowledges that it needs innovative ideas to evolve its practice beyond the growth and consumption model that dominates fashion today.

While Greenpeace and millions of supporters urge brands to re-think their resource-hungry and environmentally devastating business models, the most progressive question you can ask yourself before buying any new piece of clothing is "do I really need this product?".

This post is part of our "Reclaim" initiative, which showcases solutions to the issue of fashion waste and engages our readers to take action. You can find all the posts in this initiative, as well as feature pieces, investigative stories and video, here. Follow the initiative on Twitter at #Reclaim. And if you'd like to add your own thoughts to our series, sign up here for a HuffPost blog account.