Sen. Trent Lott's resignation announcement Monday may have woken many on Capitol Hill out of their tryptophan stupors, but speculation over his replacement is not surprising anyone. The focus is on Mississippi Rep. Chip Pickering and Roger Wicker as the most likely candidates to replace Lott. 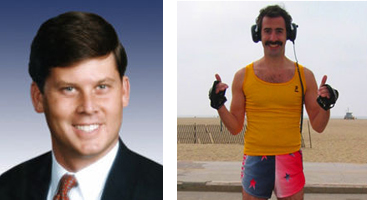 Pickering announced this summer that he would be retiring from Congress after ten plus years to spend more time with his family. If Mississippi Governor Haley Barbour appoints Pickering to Lott's Senate seat, then he'll be hitting the campaign trail instead of going home. Lott's seat will be up for grabs again in a special election occurring the same day as the November 4, 2008 general election.

And if that's the case, Pickering might find himself answering questions about his cameo in "Borat: Cultural Learnings of America for Make Benefit Glorious Nation of Kazakhstan." Pickering appeared at a Pentecostal gathering where theories against evolution were cheered and the Chief Justice of the Mississippi State Supreme Court declared that America "will always be a Christian nation until the good lord returns."