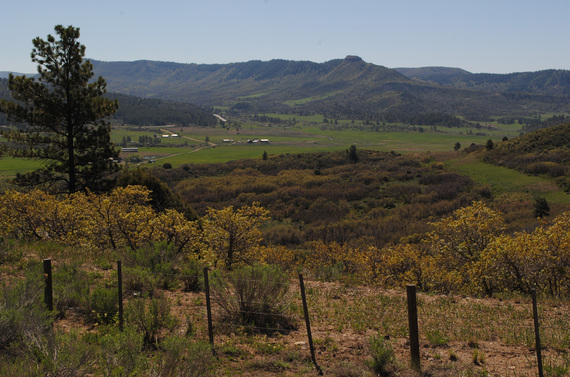 Farms, scenery and recreation may be harmed under the new Tres Rios Management Plan in soutwestern Colorado.

My grandmother Antonia was born in Durango, Colorado in 1895. Whenever I visit that southwestern corner of the state, the beauty of the landscape and the historic feeling of the local towns allows me to imagine what the area was like when Grandma Toni was a little girl.

Knowing that I have roots connects me to the place, but I really connected during high school, visiting farm families (many of them Latino) through Future Farmers of America, and again during college, working on a fire crew and living off trout from the Dolores River. I have biked many back roads in the area, and hiked trails from canyons along the Utah border to the tops of the San Juans and viewed the amazing vistas of Ancestral Pueblo dwellings at Mesa Verde National Park. Living there made me want to spend my life working in the outdoors, loving the land.

So when I get passionate about southwestern Colorado, it is for very good reason.

Tres Rios Field Manager Connie Clementson announced the U.S. Bureau of Land Management's (BLM) decision last week to open nearly the entire region to drilling and mining. This is, to say the least, tragic. It is tragic for me personally and for the thousands of families who, for generations, have hiked, camped, hunted and fished in the area.

The Record of Decision for the Tres Rios Resource Management Plan turns over more than 92 percent of the area's public lands to potential oil and gas development. To have one of the most beautiful landscapes on the continent further segmented by the oil and gas industry, its streams impacted, its air further polluted and its communities subjected to environmental risks and health impacts is a crime against the region, its long-standing communities and all Americans.

The BLM pats itself on the back for "conducting a broad, thorough, and innovative community-based public input process that far exceeded the typical efforts of a federal lands scoping process." Good for BLM - the agency invited lots of people to the forum.

Given all the work that was done by the public to provide commentary to the Bureau of Land Management in the interest of achieving a better balance between development and conservation, one would think that the agency might have refrained from handing over nearly all the land to leasing.

The sheer dismissal of public input and absolute favoring of oil and gas companies exemplifies how the agency seems to favor the desires of industry over the needs of the people. There was a concerted effort by community members and other stakeholders to propose balanced solutions - such as a Master Leasing Plan - to the proposed plan once it was released. Despite more than two dozen formal protests over various aspects of the proposed plan that were provided to the BLM, only one part of one of those protests - a fraction of the concerns - was addressed.

The value of open spaces, clean water and wild places mean a lot to the health of the ecosystem and communities. The agricultural uses of the land mean the livelihood of thousands of people employed in agriculture and to the family farmers who have worked the land for generations. The value of wildlife, cultural resources and public land access sustain traditional communities, sportsmen and women and a thriving recreational economy.

There are so many reasons to protect this land and, yet, the chorus of public voices calling for protection of agricultural lands, recreational areas and cultural and natural treasures apparently means nothing when set against the clamor of industry, and its drive for temporary gain. The idea that development should be balanced with conservation has fallen upon deaf ears.

If she could still be with us, Grandma Toni might not recognize what has become of her government and, more importantly, the land where she was born. I am afraid that I soon won't recognize it either.