In the Kentucky Senate race, current Secretary of State Trey Grayson is the preferred candidate of the GOP establishment. But Grayson has thus far been unable to overcome a primary challenge from Rand Paul who -- paced by his father Ron Paul's indefatigable fan base and Kentuckians' natural love for South African currency -- is dominating in the polls.

As the Washington Independent's Dave Weigel has been documenting for a long while, there's been a real unwillingness among party officials and local media to admit that Paul is the decided frontrunner in the race. Back in December, Weigel captured the contest thusly:

Six months out from the state's primary, there's reason to ask whether Grayson's sleepy Rose Garden campaign is failing to take Paul seriously.

Finally, Grayson's out there in earnest, working to wedge his base away from Paul. Last week, Grayson touted the endorsement of former Vice President Dick Cheney and characterized Paul's opposition to neoconservative international misadventures as Paul's "strange ideas." But it's a previous ad that you might see back in play, now that the University of Kentucky has been eliminated from the NCAA Tournament:

Yes, Rand Paul obtained his M.D. from Duke University, like his father. Had Carly Fiorina's people made this ad, they probably would have included a shot of Christian Laettner eliminating Kentucky in the 1992 tournament while flashing red demon-sheep eyes. But in a basketball-mad state, maybe Grayson can drive up Paul's negatives by associating him with the hated Blue Devils.

That said, it's worth noting that Grayson actually attended Haa-vahd University as an undergraduate. He received "a JD/MBA dual-degree" from Kentucky. Of course, Paul attended Baylor as an undergraduate, so he will have a team in the Final Four no matter what happened this weekend.

UPDATE: An eagle-eyed reader sends along a newspaper clipping that demonstrates that Trey Grayson wasn't always so hostile to Duke University: 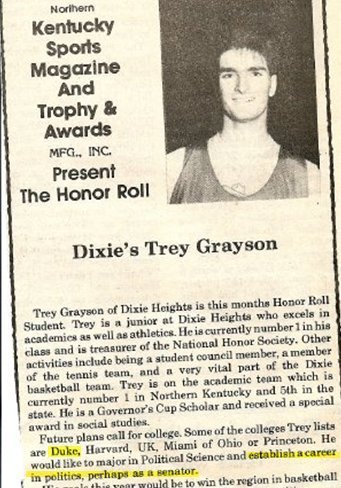