The bright proud colorful flags of Indian Tribes were evident among the buoyant spirits and ebullient smiles of those members of Tribal Nations that assembled at the Ronald Reagan International Trade Center for the 7th Annual White House Tribal Nations Conference. The Conference centered on the president and members of his cabinet that discussed issues of importance to tribal leaders, with an emphasis on ways the Administration can continue to make progress on improving the nation-to-nation relationship and ensure these gains continue in future administrations.

President Obama has been the most well traveled in history in terms of visiting the land of many tribes throughout the USA. This year, the president visited Alaska and the Choctaw Nation in Oklahoma. A slew of new initiatives and funding programs were announced for the Tribal Nations, touching on areas of import such as Reducing Systemic homelessness, collaborating to increase protections for sacred sites, providing opportunities for native youth, secondary and college education, drug rehabilitation, poverty,job growth, waster supplies, environmental concerns and many others.

In spite of some tough conference sessions on some hard subjects that are affecting some of the Tribal Nations community, the effect of poverty, and additions to prescription drugs, the mood in the auditorium was positive with an overwhelming sense of gratitude by Tribal Nations for the efforts the Obama administration has done to progress their cause. 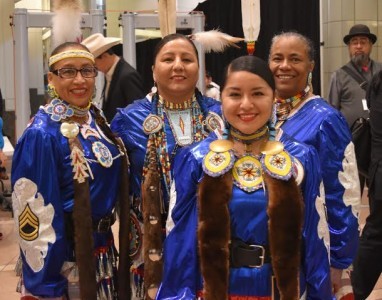 On form and relaxed to be among friends, the president quipped, "When I ran for office, I pledged to build a true nation-to-nation relationship with all of you. And back then, I was just a young adopted son of the Crow Nation. Didn't have any gray hair. Now I am President Barack Black Eagle. And what started out as a campaign promise has now become a tradition. So welcome to the 7th White House Tribal Nations Conference."

There was a sense that there was concern among the Tribal Nation community as to whether they would have the same level of federal engagement to with new incoming administration, The president said, "Well, I've gotta admit, I'm biased here, I'm really trying to make sure it's a Democrat." However, it was explained, on a teleconference call, with the current White House administration that the executive order that Obama passed in June 2013 would be hard to undo by future administrations, without going back to Congress. The health of the native American Indian population was, in essence, a bipartisan issue at this point in time, with support from the both sides of the aisle. The event hosted a lively and entertaining panel with 4-5 Indian youth who took turns asking Mr. Obama questions.

When asked about how Native youth can integrate without losing their culture, the president eagerly mentioned his wife the First Lady Michelle Obama. He spoke about Michelle Obama's experiences coming home from Harvard to a working-class neighborhood. "A lot of her friends didn't go to college, and sometimes when she came back from college, people would be like, 'Aw you, you are all that aren't you?' She's like 'no, I'm just, I'm going to college. That doesn't make me less black. I'm a black woman who went to college.'" When asked about the import of fresh fruit and vegetables, the president quipped again about his wife, "I know the answer to this as I live with Michelle Obama." he quipped. "She is all over this." Mr. Obama then went on about how fresh salmon was better than Tater Tots, and that with various initiatives, they were looking at a way for farm to table be a fact of life in the "food desert" areas of the United States. Some areas in the USA have little access to fresh food and vegetable and due to this many special interest groups and indeed the administration is looking into ways to improve fresh food supply chains in these regions in the United States.

Throughout the year, native youth remained at the forefront of the administration's effort to fulfill promises to tribal nations. The launch of the Generation Indigenous (Gen-I) initiative last December is a recognition that tribal communities thrive when their youth are safe and healthy, have access to a quality education, housing, and meaningful job opportunities, and can learn their native languages and cultures. In July, the White House hosted the first-ever Tribal Youth Gathering, bringing together over 1,000 Native youth representing 230 tribes from 42 states to engage with the Administration on these issues.