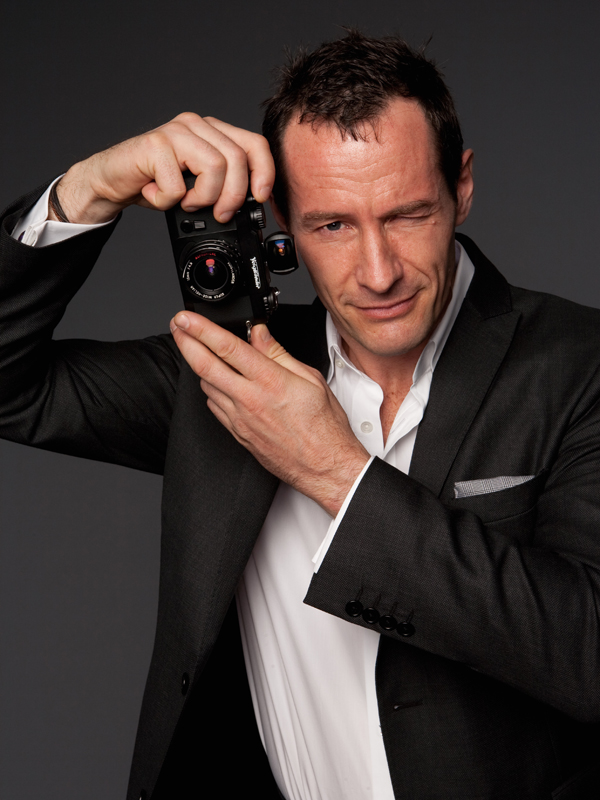 Sebastian Copeland may be the best advertisement for Environmental Advocacy going: Part James Bond, part Ansel Adams, and part Bear Grylls, he is an environmentalist, a photographer and an explorer. With English, French, and Californian influences, in real life he actually speaks like the Arctic adventure book you always wanted to read. And if you never wanted to read one, even better. For people never before interested in the ecology, he will be a revelation. Because his message isn't one of mathematical and scientific equations. Copeland simply wants to take us to the North Pole and let us look for ourselves.

Into the Cold: A Journey Into the Soul, is a documentary following Copeland's 400 mile journey on foot to the North Pole on the Centennial of Robert Peary's expedition in 1909. Fewer than 150 people have made this journey in the last hundred years. By contrast, 77 people climbed Mount Everest on May 22nd 2008 alone. Tall, impossibly dashing, and commanding, Sebastian Copeland arrived at the studio looking exactly like a man who might be able to save the planet. Twelve days after this interview he is doing a South to North crossing of Greenland. And he will endeavor to cross Antarctica on November 15th, possibly shadowed by IMAX. Copeland tells us why there won't ever be a bicentennial journey to the North Pole, that whoever walks the land will become an advocate on its behalf, and how he intends to help us fall in love with our world.

Your documentary Into the Cold: A Journey Into the Soul is part of the Festival. Very cold! A 400 mile trip to the North Pole. What is your first thought when the plane lands and you are completely alone?
Copeland: You have mixed emotions. You're excited when you land. But then the plane leaves and you're confronted in that moment with the realization that you're literally isolated within millions of square miles. You're in one of the most inhospitable environments on the planet. Rescue is uncertain. And there is nothing for you to do but put one foot in front of the other. So, the simplicity of that is what gets you going.

You say that you go on these extraordinary expeditions and experience true isolation to achieve a kind of peace. What are you escaping?
Copeland: Traveling off the beaten path, or the road less traveled, is a way to connect introspectively with yourself. To reach this communion with nature and with the environment. Our lives are so cluttered. This assault on the senses of telecommunication and email and sounds and smells and people and schedules and the clock ticking and the twenty-four hours of the day. But all this becomes an abstraction when you travel, and particularly when you travel in twenty-four hour daylight. Because everything feels like a suspended reality. Even the notion of the cyclical aspect of a twenty-four hour cycle is rendered abstract by the fact that your body clock is no longer in tune with the cycle of the sun. It's almost like a blank canvas. Sensorially, there are no colors. And then no smells because the cold kills all bacteria. Even from a purely hygienic perspective you're exerting and sweating...

You've mentioned that sweating can be deadly in that environment.
Copeland: But it does happen. But it doesn't actually produce any scent. So in many respects, you're living in a suspended reality where you can paint in that which you would like to reflect on. You can create the blueprint for your existence unencumbered by external forces. Needless to say, the cold is the predominant external force in this case. And it's unusual, because typically we don't have to deal with that when we live in an urban environment. It's very cleansing and very liberating. It's a monastic type of environment, where you live in a semi-meditative state, at least I do, because I'm a Buddhist. I'll chant a mantra up to 20,000 times a day. I mean, where else can you do that?!

Extraordinary. There is a 70% chance of failure in attempting to reach the North Pole. How did you prepare mentally and physically for this journey?
Copeland: Mental preparation is key. What I find that happens before a long trip is that progressively before you go you start to shut down some other areas of your life so that you can narrow your focus onto it. So, in many ways you could say that you're starting the trip long before you actually get to it. The physical preparation is undeniably important because there's a lot of physicality in this type of endeavor. But really, I would say that the mental is about 80% of it. All the planning is a way, little by little, to get you into that state where you're headed on a mission.

Who was your traveling companion?
Copeland: My traveling companion is named Keith Heger, and Keith is a fellow traveler and adventurer. I met him in training, and he was cross-referenced to me by a logistics team. There's a very small club of people who do this type of travel. It's not a common discipline.

That is a very intense kind of togetherness! You're in the plane, and the pilot says before landing, "Welcome to Nowhere!" There's the two of you, and nothing else. How do you negotiate a relationship that has to be that close by necessity?
Copeland: It's funny, that line by the co-pilot, "Welcome to Nowhere," almost became the title of the film. I decided against it in the end, because I thought it was a little pejorative for the environment. It's not nowhere, and in fact it's everywhere. It's as real as anything else, but I liked it.

I thought that was a wonderful moment. And as for being with Keith?
Copeland: It's a mission. It's like a soldier going into battle. You're not going with your best friend, you're going there with somebody who compliments your skills and who you know will have your back as you have his. Somebody you can depend on. That's who an ideal partner is. If a friendship develops out of it, then great. But that's really neither the objective, nor the desire. The objective is to reach your mission, and to put the best tool forward.

Is it true that the conditions were so agonizing that the only way you could get the camera batteries to work at all was to warm them in your armpits?
Copeland: One of the most harrowing aspects of this adventure was the filming. The camera that I shot the film on, which is a remarkable piece of equipment, a Canon Mark II 5D, had just come out on the market. As a result, they were low on battery supplies. The cold destroyed all power alternatives and I found myself, four days into the trip, with no possibility of photographing or filming anything.

So there you are. You've made it all the way to the North Pole, ostensibly to make a documentary or at the very least take your photographs because you're also a photographer. And now there's nothing. No way to film anything at all.
Copeland: That's absolutely right.

What do you do at an unbelievable juncture like this one?
It was truly a moment of reckoning. I had to go back to the little batteries I had. In cold weather batteries lose 50-60% of their power. So, I took the batteries and--of course this was theoretical, I had never tried it--I warmed them up and put them back in the camera. I knew I couldn't do the entire trip on four little batteries. But, I kept them under my armpits. Every time I found something to film, I knew it might be at the exclusion of something later on. Fourteen days before we reached the Pole, I had exhausted all power and capability of filming. When they fetched us at the Pole in the helicopter, they brought a package from the expedition guys. I re-filmed the arrival at the Pole. It's the resolution of the movie. Without it, I wouldn't have had a film.

That's truly amazing. There's a wonderful part of the film where you say to yourself, "What type of man are you, to think you can succeed at this?" So, what type of man are you?
Copeland: You always have to measure your desires and goals against your ego and your humility. And then the thrill-seeking adrenaline-fueled experiences. I'm an adrenaline junkie, I won't deny it. I'm not addicted to anything in life, except adrenaline.

In which case, you'll have to be our authority. So, on this trip there's a phenomenal kind of euphoria? An incredible feeling?
Copeland: Very much so. My biggest dream would be to go to outer space. I also love to mountain climb. I love to see things that no one else will see unless they get themselves there. I love the elevation and height. You get a vantage point and a perspective that is very unique to your accomplishment. In light of my environmental commitment and my desire to advocate on its behalf I skewed my travels all to the Polar region because nothing communicates climate change better than melting ice. You get a full sense of immersion into an environment that man has no real business being in. There's a sense of purpose. I get to come back and communicate what happens in terms of climate change.

You are a very passionate advocate for global education. You've witnessed something that millions talk about, think about, but will never see with their own eyes. You are seeing how the planet is changing. What would you like us to know?
Copeland: You cannot measure climate change in one trip. You can't even document climate change in one trip. Climate change is a process that typically is non-linear. Even upon examination, it lives in comparison with other moments. To examine one environment, and come back with actual proof of anything, would be misleading. And inexact. I don't purport to do that. My job is, I'm a photographer. I'm something of a filmmaker. And primarily, I'm an adventurer. My job is to help people fall in love with their world, their planet. With the understanding that you don't save what you don't love. So I have a unique perspective in bringing something back to people. My objective isn't to hit people over the head with data. The idea is to get people closer to this environment, which is in reality, their backyard. Because the world is shrinking. While the Poles can feel very distant, and foreign, and foreboding they are actually extremely near. For me to travel to this environment and come back with images is a way to communicate to people that this is part of their world, and by virtue of that, they are part of it. And if this part dies a little, so does humanity. I'm fond of saying that whoever walks the land will become an advocate on its behalf.

It is so beautiful in the film. Did you find the land staggeringly beautiful?
Copeland: Oh, yes. I felt it even more than you can see in the film. I comment that one of my great frustrations up there is that you simply can't capture the breadth and the beauty. You can be Ansel Adams, but its impossible to capture what it feels like. I go to great lengths to record the feel, but I'm not an artist in the field, I'm simply a reporter. I'm recording a reality over there. Not creating it. At the risk of sounding falsely modest, I'm just the guy who presses the button. The credit that I will take is that I find myself in front of my subjects. In this instance, that in itself is a great challenge.

And a great achievement.

See Into the Cold: A Journey Into the Soul.
http://www.tribecafilm.com/filmguide/into_the_cold-film30497.html