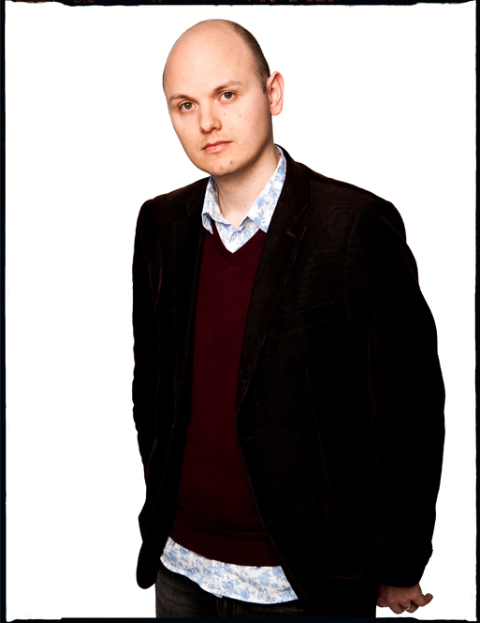 Movies today seem to consist of CGI animation, 3D, IMAX, exploding geese and possibly confetti. The more dazzling films become visually, the less plot they seem to involve. It is extremely unusual to hear about a director making a film out of what he doesn't have. So imagine a film with three characters, a room, and as much story as you could possibly squeeze into the situation. This is the setting of The Disappearance of Alice Creed. The Toronto Film Festival noted, "Not since Reservoir Dogs has a hostage standoff been handled with such intelligence."

People report leaving The Disappearance of Alice Creed and then thinking of nothing else for days afterward. Meeting the writer and director of Creed is a similar experience. J Blakeson is so engaging and articulate about film that his thoughts and ideas return to mind days after our meeting. The plot: Two ex-cons kidnap a young woman. Although, using that brief sentence to describe the plot is like detailing the finer points of War and Peace by haiku.

Blakeson is incredibly knowledgeable about what makes film work and is totally willing to share. Unlike many young directors, he knows exactly what he wants, and talking to him, it is easy to see that he's not at the Tribeca Film Festival by accident. Tall, elegant and English, Blakeson truly loves film and it is a medium in which he excels. No matter what conclusions you draw by the film's end, or even two days later, J Blakeson is a director we are going to be seeing again.

Yours is a very intricate script, and an extremely involved plot. How did you come up with the idea for this film?

Blakeson: It was born out of necessity. I knew that if someone gave me money, it would have to be achievable on a low budget and if they weren't going to give me the money, I would need it to be small enough to be able to make it myself. I started with limitations. The number of locations, the kinds of characters. They had to be locations that I could get and use for a long time. I had an apartment! I thought I could probably buy a van on Ebay, so those were the main two locations. I started off with those limitations.

So, your plot was in fact fueled by limitation?

Blakeson: Yeah. I knew what I couldn't have. It's quite liberating to get rid of things you can't do. I've got no money, but I can do this and this, so lets make this the best version that we can. And so with three characters I felt like I could make a very intense thriller, I knew I wanted to make a thriller.

Blakeson: Single situation movies are often about someone wanting to get something from the situation, and other people not wanting to give them that thing. With a film like Panic Room, which is a similar sort of movie, it takes one situation, and spins it and spins it and spins it. And at the other end of the spectrum, Reservoir Dogs takes one situation and spins it. You need high stakes. If you haven't got lots of CGI action sequences to dazzle the viewer with, you need to keep the story moving and interesting. I love genre film-making, but I like using genre as a way into character stories. It's a way to get people focused and involved in the film before anything has really happened. Because they recognize the genre and are comfortable in it. And they understand the rules. And then you can play with those rules and that set of expectations.

How did you play with the rules here?

Blakeson: I think I throw you in at the deep end. I've been reading a lot of Hollywood scripts and they give you everything, tell you everything in the first five minutes. If you don't know everything by page ten, you've failed. In this film, I don't give you anything. I just slowly reveal things throughout the course of the film. What happens is that the viewer makes assumptions about the characters and in this film I wanted to start the film off as if they are archetypes, or even stereotypes. You had the sociopath, who is completely driven and focused (Eddie Marsan). And then you have the twitchy live-wire younger guy who is obviously going to do something wrong (Martin Compston). And then you have the helpless, beautiful screaming victim (Gemma Arterton). And we understand these sorts of characters. I wanted to present these characters in such a way, that I don't say that that's what they are, but that's what you assume they are. Then we slowly peel away the layers and by the end of the film you realize they're really not like that.

You're taking our expectations and spinning them on their head?

Blakeson: The story switches hands halfway through, and you're not sure who you want to win. And, hopefully, you're not sure what's going to happen. A lot of time I watch a film and I know, twenty minutes in, more or less what's going to happen the rest of the film. I want you to feel like anything could happen. Five minutes from the end, you still don't know which one of them will survive. I hope it's more rewarding than if I had just told you at the beginning.

Eddie Marsan continues to amaze film after film. How did you choose him?

Blakeson: Eddie's the hardest working man in the UK. He's worked with Scorcese, Michael Mann, Malleck, everybody. It was initially intimidating: He's worked with all these great people and now he's working with me. He is so focused on what he's doing; a real craftsman.

Did he teach you anything with his years of experience?

Blakeson: Yes. All actors work differently. I think he had concerns about working with a first-time director. I think a lot of first-time directors don't really know what they want. They're searching for something. Whereas I was very clear about what I wanted. When we sat down for the first time, for two hours, he came loaded with questions and I could answer them all because I had written the script! [laughs] I think I learned how to let good actors be good actors. You don't want to micro-manage them. You want to let them find it themselves and then just guide them when they need you. It wasn't an easy shoot, but working with these actors was easy, because they're good. It wasn't like trying to get blood from a stone. I tried to bring out certain aspects, but they made me look good without having to do too much!

It it easier to direct your own writing?

How did you know you would go into film?

Blakeson: When I was younger, I always wanted to be an actor, but I soon found out I was quite terrible. I was ten. I always loved films and grew up watching endless films.

Do you think age ten is old enough to judge? Can you see yourself like Tarantino or Hitchcock, giving yourself cameos?

Blakeson: Well. I've been in other things since then! I'm just not very good. I always say, bad actors can make quite good directors.

Why is that, do you think?

Blakeson: In football, or soccer as you call it, some of the best managers were quite mediocre players. The really good football players, it just comes easily to them. Same with actors. They can of course hone their craft, but they've got some essential ingredient. A huge natural gift. What I want from acting but don't have myself, I can then recognize in other people.

What components do you think make for a brilliant screenplay?

Blakeson: Well, it's not a rocket science, but if you have a compelling story that makes people want to know what will happen next. All the time. If people don't care what happens next, you've failed. Then you need to have characters that people will care about. It's an old cliche: Story is character, and character is story. The two have to weave together to create a film. And knowing how to lay out a screenplay well, that really helps. I learned a lot reading very good screenplays. You have to remember how it will be received and what you want that script to do for you.

What are some of your favorite thrillers?

Blakeson: Fight Club. It's the best film of the last, it's longer than ten years now, so eleven years! [laughs] It had a lot of press at the time about being aggressively masculine, but it is such great satire. The way it's shot, he's thought about every second of that movie. Going back a long way, I really like films like The Killing, the Stanley Kubrick movie. Where it just goes and goes and goes. They didn't have the time or space to do anything apart from get really big performances and tell really big stories. And, in the end, that's what it's about.

See The Disappearance of Alice Creed: